You are here: Home › announcement › please help suaram if you want to know who kill altantuya 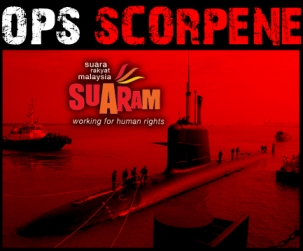 .. well not really…  was just trying to sensationalize the heading… but i guess it wouldn’t be really wrong to say so though.

ok what am i mumbling about? i’m talking about suaram’s ops scorpene, of which they had hired famous human rights french lawyer,  william bourdon to investigate the scorpene submarines deal, of which hefty commissions were paid out.

well, everyone knows that the late altantuya, the mongolian lady who was C4ed, was involved in the submarines deals… and everyone knows who was the defence minister at that time. so yes, altantuya and the PM does have connection with ops scorpene. so yes, my heading up ther  wouldn’t really be wrong.

the ‘help’ i meant is that suaram need lots of funds case in court. (read how much is needed from malaysiakini, CnP below).  suaram had already organised dinners in penang, PJ and ipoh to raise funds, where william bourdon was present. oops! sorry. was present only at the penang dinner because after the penang dinner, someone got frightened and suddenly shoo-shooed him off from malaysia.  well, this someone, was clearly very involved in the submarine deals… and oh involved with altantuya. oops. sorry. he already swear inside a mosque he had nothing to do with altantuya, have not met her.

really? well if you want to find out… the ex defence minister and the now prime minister involvement in the submarines deal and with altantuya (oops sorry. i should add, if any), do give your full support to suaram – DONATE TO SUARAM! yes, they need lots and lots of cash for the court case in france.  if you want to see the submarine scandal being exposed, and the culprit/s exposed, please do your bit to donate to suaram. you can read about the ops scorpene at the suaram’s website.

Donations can also be made to SUARAM via cheque or online transfer to Suara Inisiatif Sdn Bhd, Ac. No: 0300-0065-200, Hong Leong Bank Berhad.

so what are you waiting for? quick, donate! i will also donate but only RM100 as i’m not rich (and no high salary).  this is one cause i will fully support!

Aidila Razak
Aug 5, 11
12:56pm
The RM250,000 raised by human rights NGO Suaram’s fund raising events last month is expected to fall short of the total legal cost needed for the case it is pursuing at the French courts over the Malaysian government’s purchase of two submarines.This is despite the fact that the funds raised far surpasses the NGO’s initial “modest” target of RM100,000, which it intended as a start-up fund.

Speaking to reporters at Petaling Jaya today, Suaram director Cynthia Gabriel (below) said it is expected that the “overwhelming” donated amount would only cover the initial stages of the case.“We are profoundly humbled by the generous outpouring of support in ticket sales, contributions, donations and pledges garnered.“Even as we speak donations trickle in (but) our lawyers informed us that translation alone would cost €20,000 (RM84,994 at present exchange rate of RM4.20 = €1) while the filing fees are yet to be determined,” she said.She added that Suaram has no indication of how much more it will need to fund the case – expected to go to trial as early as next month—but expect the costs to balloon as its lawyers have advised that the case will be “long drawn out”. As such, Gabriel urged the Malaysian public to continue to donate to the legal fund, saying that monthly updates on the case and the funds collected will be published on the NGO’s website andFacebook page. “The donations will in no way benefit Suaram, but is going to purely fund the case. It is a mounting challenge for us, but we don’t want to go to (foreign) sources. We want it to be purely funded by Malaysians,” she said.

Deportation raised interest in fundraiserObviously touched by the support given by Malaysians thus far, Gabriel said that the dinners held at Petaling Jaya and Penang raised RM150,000 and RM60,000 respectively, while RM26,000 was donated at a forum in Ipoh.

Part of the reason for the landslide support, she said, was the deportation of Suaram’s lawyer French national William Bourdon (left)on the same night that he was supposed to speak at the Petaling Jaya event on July 22.

Suaram was forced to set up extra tables at the sold out dinner at the Petaling Jaya City Council banquet hall and allow others to come in despite being unable to serve them food. 76 tables were sold in Petaling Jaya while 600 people attended the dinner in Penang.

On July 23 in Ipoh, an individual had donated RM20,000 because he was “angered” by Bourdon’s deportation, which Gabriel said raised a lot of questions among Malaysians.The Ipoh forum, which saw 500 participants, also attracted a group of former military personnel who shared their observations and experience about the Defence Ministry’s spending on arms.

Gabriel added another surprise donation came from the Penang and Selangor state governments which donated RM20,000 each at the Petaling Jaya event. “We are also very touched by the individuals who donated, like the disabled man who had traveled by public bus from Puchong to our office (in Petaling) to purchase a few tickets to the event,” she said.

“The French people had no idea that he was pursuing (this case) in Malaysia, and it created tremendous interest among the public,” she said.She added that the deportation brought “shame and disrepute” to Malaysia, as Bourdon is a “renowned” human rights lawyer in France due to his work in high profile cases involving the Pinochet dictatorship and Rwandan genocide, among others. “The government had shot themselves in the foot when they deported him,” she said.

She revealed that Bourdon has committed to speak at a fundraiser in London, organised by Malaysian citizens there on their own initiative, although the date has yet to be set. A group of Kuching residents have also approached Suaram to do the same, committed to holding a fundraising event where Bourdon will be speaking via video conferencing. Details, however, have not been confirmed.

Suaram’s case is on the purported commissions and kickbacks paid out by French shipbuilder DCNS to Malaysian company Perimekar amounting to €114.9 million (M574.8 million at then exchange rate of RM5 = €1) in the purchase of two Scorpene class submarinescosting €1.341 billion (RM6.7 billion).