You are here: Home › general › fridays shouldn’t be used for illegal rallies 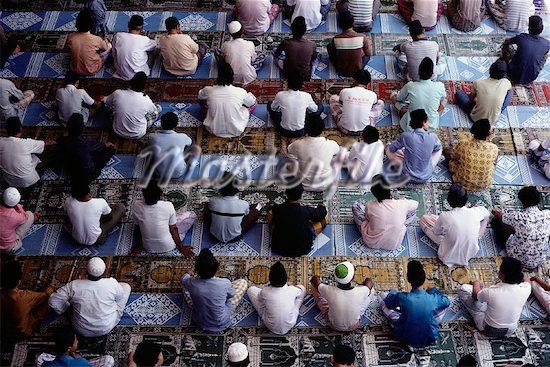 well well well, haven't i already said that a million times? well, not really exact those words… but had hinted at it. yes indeed, there were so many times the malays, especially indian muslim, if not mostly them!… always hold demo or protest after friday prayers at the mosque. after they hold a protest after friday prayer, each time i will repeat the mantra – after pray pray, they come out to fight fight (full of anger)… whatever for they pray then!!

the penang malay congress, a malay NGO in penang said it all – friday is a holy day for muslim, why choose the day to protest? read the following news piece from malaysiakini by my friend, susan.

A Malay NGO based in Penang is totally peeved that ‘unruly’ streets demonstrations are taking place after Friday prayers, describing it as a holy day for Muslims.

The Penang Malay Congress said it was disappointed that the “organisers or funders” of these rallies, who are Muslim Malays, seem to prefer choosing Fridays as the day for their physical activities.

Its president, Rahmad Isahak, said that he is surprised that active Muslim rights groups like Perkasa have not spoken up against these rallies on Fridays, especially after compulsory prayers in mosques.

“Are they not aware or do they purposely choose Friday, which is a holy day for Muslims, to carry out their illegal activities?” asked Rahmad during a press conference today.

“They should realise that placing the dignity of the Malays on the streets with the intention to express their dissatisfaction towards the state government is an act that is uncivilised and looked down upon by the non-Malays,” he charged.

Rahmad said the state government may not entertain the protesters if they conveyed the problems of the Malays in a such a physical and unruly manner.

He added that as a Malay, he too, would not have given such protesters the time of day if they had approached him in such a rude manner.

Rahmad, who claimed he was speaking for the 640,000 Malays in Penang who disliked street demonstrations, was referring to weekly protests held by several NGOs around Komtar.

Last Friday, Mohamad Ghani, together with other Muslim NGOs, held a protest outside the Kampung Jawa mosque against Seksualiti Merdeka, where the group stomped on and burnt an effigy of the Bar Council logo.

They targetted the Bar Council as its former president and Bersih 2.0 chief S Ambiga had planned to launched the yearly but aborted festival last week.

Mohamad Ghani, who is Komtar Traders Association vice-chief, has led many protests since last year to condemn Lim as a “racist” leader out to marginalise the Muslim Malay community in Penang.

Meanwhile, Rahmad was also unhappy with the 200 motorbikers (mat rempit) who held a noisy protest outside the state legislative assembly on Monday, Oct 31, to demand a racing track to carry out their activities.

He alleged that the youths who participated in the rally may have been paid by certain quarters, while most of them were unaware of what they were doing.

Organisers of the group, an NGO called Pertubuhan Islam Gabugan Amal, had however, denied it was behind the bikers, who wore yellow T-shirts saying Lim was racist.

Rahmad pointed out the futility of the rallies, saying it has so far failed to benefit the Malay community.

Members of the Penang Malay Congress had met Lim recently and submitted a five-point memorandum on Malay issues without organising any rallies, he added.

“Where is the Malay culture which prefers discussion? The streets demonstrations appear to be more towards politicking by those who are bankrupt of power,” he said.

“They are culprits from Umno or Pakatan Rakyat leaders who are behind these groups and are willing to make use of the youths to achieve their goals,” he alleged.

Rahmad reminded those responsible for denigrating the image of the Malays to take note of Article 153 of the constitution which touches on Malay rights and the powers of the Agong to ensure those rights are protected.

He added that destroying the image of the Malays with such physical demonstrations is akin to insulting the role and powers of the Agong.

He also did not spare the Pakatan Rakyat government, urging them not to take the rallies lightly.

“The DAP-led Pakatan government should seriously look into the plight of the Malay community in Penang or such displays of dissatisfaction would continue,” he warned.

“The Penang government should speedily set up a Consultative Council on the Social Economic situation of the Malays so that the community’s grouses can be channelled through this forum,” he urged.

He also took the police to task for not acting professionally to prevent such street demonstrations from recurring.

“These groups have the spirit to conduct the demonstrations weekly because the police do not act accordingly when they know about these activities earlier,” he said.

“Please act properly or else the Penang Malays are going to lose confidence in the police force,” he said.

Honestly, in Malaysia, Friday is not a holy day any more. It is more like a holi day (paid holiday, that is)… hardly any work gets done, long lunches, a quickie prayer and mall visits to cool down and to shop around… holy day… what a bull!

ghani how much you get from umno leaders to do this. be human dnt behave like a cow

Maybe use the beef money to pay Mat rempit.

please allow me to repeat not exactly in the same wrods as yours: Rahmad Isahak, you said, "Fridays shouldn't be used for illegal rallies". Very commendable indeed. However, with due respect, you only scored 1/7… roughly 14 our of 100 marks. Do you mean to say ILLEGAL rallies can be tolerated on any and all the rest of the other 6 days of the week?

Is this man saying that the other six days of the week are fine for Mat Rempits to cause havoc, terrorizing the public etc. The simple fact is that these Mat Rempits are acting illegally and our policed force do not seem able to eliminate them from the streets. But I forgot, their patron is Khairy, UMNO Youth boss. So they are above the law. A crime committed on any day is a crime not just Fridays.

Is Friday the only holy day of the week? This is very narrow perception. In M'sia, looks like the Imam or the Ustaz give firery speech to emotionally wake up the muslim to have street demonstrations. Can they one time be civilised , please?

These Malays who are protesting after prayers are only people who know the ritual but they lack spirituality. That is why there is no inner awakening in their lives.

Don't let the mamaks take over. They bring shame to the Malays who are known to be humble and good people

hey protest and maki maki, so after a week they pray again to god and ask for forgiveness ! This is Drama lah ! Never trust them ! NGO ? hahahhahahahahhaa

what an archaic race and religion.

They pray with their mouths and lift their hands up to Allah at the mosque and immediately after they use that same mouth and hands to curse and swear and fill their hearts with hatred!!! How ironic, how sad, we have these INDIANS calling themselves MALAY Muslims, losing all the graces (pahla) received during Friday prayers….podah!!!

The fake malays are a disgrace and doing disservice to the True Malays. We have always heard from our so called leaders of our country that demonstration is not part of Malaysian culture, especially when street protests are held by PKR, DAP, PAS and other NGOs against bn policies. But they kept mum when the protests and demonstrations by their allies like Perkasa, Suara Anak-anak Malaysia and many others. Fridays are supposed to be an auspicious day and one should exercise compassion and care.

The real Malays must kick out the mamaks pretending to be Malays, and giving Malays a bad name.

Mat Rempits are a branch of Umno Youth wing. they were also guised as Patriots in protest of Bersih and threatened to burn down PKR HQ. Now they want Guan Eng to give them a racing track. Bollocks to them. Fridays are meant for prayer but rempits use that time to race. Shameful and waste of time.

The non-Malay look down on them. Honestly, what else do you think what the non Malay would see. In fact, the entire world have a low opinion of those Malay who purposefully demonstrated after their Friday prayer as if they have drawn inspiration from their god to act mischievously, a real bad testimony. By right they should be remorseful or a feeling of a contrite heart for a past week's wrongs and strive for a victorious week to come in order to shine for their god. Instead they look forward to do mischief on Friday, a holy day. Apa lah. We, the non-Muslim wishes and pray that the Muslim would be responsible, peaceable and rational fellow citizens.

"Its president, Rahmad Isahak, said that he is surprised that active Muslim rights groups like Perkasa have not spoken up against these rallies on Fridays, especially after compulsory prayers in mosques."" ——– hallo, you expect perkasa to speak up? these are the same idiots who are starting the rallies on Friday !!! where have u been? your talk is not enough when the powers that be are the ones who staged all these Friday demos. Talk all u want…the ruling govt is organising this n the background, who are you or we to stop them?

Don't worry, no one is looking down on Muslims. Go ahead and do what you all deem is right. Don't drag non Muslims into what you people are doing. Don't put the blame on others of your own deeds.

Look at the demonstrators; face. They are 110% MAMAK la, macam Mamakuthy!!!

This is the first decent, brave and logical statement made by NGO that I fully agree……but will these morons listen….or continue to demonstrate after friday prayers for all to see in disgust the idiotic behaviors……

! Hear ! Now this Malay Muslim from the Penang Malay Congress, who happens to be the president of the NGO is brave enough to tick off those unruly Muslims the likes of those from Perkasa etc who have always been demonstrating against everything under the sun immediately after Friday prayers. Like what Rahmad Isahak has said, Friday is a holy day for Muslims. They should concentrate on praying and doing good deeds instead of demonstrating immediately after praying at the mosque. Kudos to Encik Rahmad Isahak !!

Pls dont stop all the rallies after friday prayers. You and your religious up bringing are well displayed for the kafirs to evaluate.