You are here: Home › general › no more after friday prayer protest? (at the mosque) 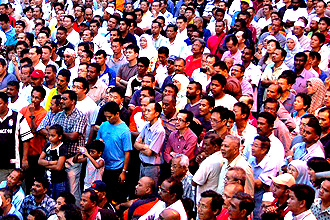 well, our brand new bill said so – the peaceful assembly bill (2011) states that no street protests are allowed, and bars any assembly in or anywhere within a 50 metre buffer zone around defined prohibited areas such as schools, hospitals and places of worship.

(from the malaysian insider)

well i hope the bill will not be passed (allow me the privilege to continue see the after-friday prayer protest) because if it is passed, after our mass in church, a group of us can't stand in front of the church too… because that might constitute as being in a protest within 50 metres of a church.

well well well, this peaceful assembly bill, which was tabled yesterday, is to replace section 27 of the police act 1964.  ISA.  remember najib's announcement that the ISA will be repealed? many of us were sceptical and fear that the new law to replace ISA will be worst… and we are right!   PM najib had, on malaysia day, announced pledged to reform some laws e.g. the police act and ISA. many were skeptical as at the same time, he said new laws will be introduced and many fear the new laws might be worst… and they were right! as pakatan rakyat said, this new law chokes liberty. so what was it again that our umno leaders had been telling us that our country is democratic? MY FOOT!! and worst this law all the more turn our country into a police state. (yes all the more, as it has been a police state already).)

as you will notice, from media here and there like malaysian insider and malaysiakini, many people had protest against this bill. i hope the bill won't be passed in parliament! the malayisan bar council had also spoken up against this bill.

note:  you can read the bill in full here (not sure if you need to be malaysiakini subscriber)