You are here: Home › Double standard › shame! shame! perak turned into a police state and the state assembly into a wild circus!

(damn! wanted to post this last night but i was having slow connection and can’t seemed to load the wordpress admin page at all to post. am posting it early morn before go to work) 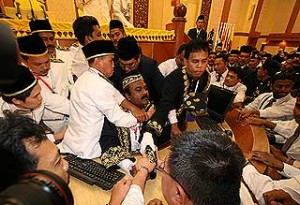 i’m sure many of you had been following what was happening in perak from morning till now.

do go to my 3 favourite online news for updates:
malaysiakini
the malaysian insider
the nut graph

it’s such a shame what happened in perak – the many arrests. people were arrested even they were just in a restaurant eating and drinking. if you look carefully, most of the MPs who got arrested were from the opposition.

then another shame – the assembly sitting. grrr! so geram reading about it especially the part where they forcibly dragged out sivakumar, the speaker.

will write more, as did intend to write more but as i mentioned in the beginning can’t do it last night. see the picture here, taken from malaysiakini, how goons in the house forcibly dragged the legal official speaker, sivakumar out. more pics later.