You are here: Home › government › let us pray… then let’s curse them!!

ladies and gentlemen, here comes the AFTER FRIDAY PRAYERS PROTESTERS again! they prayed and prayed, then they come out to shout at people, hurled abuse, burned effigies.  what had they been praying about then, pray tell me.  were they, while praying, their mind and hearts already thinking of the protest – how to shout, how to raise their fist, what abuse to hurl.  ya allah, don’t they feel ashamed? that this shows what hypocrites they are? oh no, they won’t feel ashamed but they are making other muslim ashamed of their own religion.

how come christians are so stupid… don’t know how to organise a protest or demonstration after sunday service/mass? you’ll get more people that way, you know. hey, thaipusam is approaching. the hindu should organise a protest too after they went to the temple for prayers. likewise buddhists, why not follow our muslim brothers and 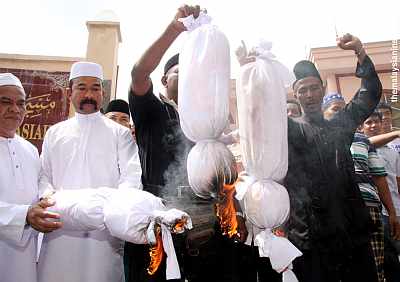 sisters, protest after you went to ‘pai ti kong’ (pray to god of heaven in temple) or after your wesak day celebration.  you come across these incidents before?

well, yesterday afternoon, i.e. friday afternoon, whaddya know happened? two AFTER FRIDAY PRAYERS PROTEST! look at the picture here… these two men were still wearing their prayer uniform! this protest happened at the mosque in kg kerinchi, KL.  they were protesting against ‘a chinese lawyer’, purportedly to be a MCA man, who wrote to the PM to have the volume of their prayer call tone down.  oh boy, the usual tune were sung – your must respect the sensitivity of muslim, this is ‘tanah melayu’ our country.

as i always said why should it always be that we must respect their sensitivity and not the other way round? they even want the chinese lawyer  to be detained under ISA! what a joke! btw, the protestors consisted of members from the muslim welfare group pekida and malay rights NGO perkasa. figures eh. a bunch of jokers!

At the protest, the chairman of Pekida’s Lembah Pantai chapter, Zakaria Awang, demanded that the man be arrested for sedition.

“We want him to be arrested under the Internal Security Act for threatening national harmony or he can change his citizenship to a nationality of his own liking,” he said.

He added that the “lawyer” should also make an open apology to the Muslim community in the country.

who the hell made them official spokesman for all muslim? there were only 100 of them.  do they think ALL muslim share their view?

gee, don’t want to talk about this anymore as the more i talked about it the more geram i feel and i will be tearing my hair. uh..oh but i have to talk about the second AFTER FRIDAY PRAYER PROTEST yesterday (i mentioned above, two protests, remember).  haiyaa… and this one will make me even more geram… because it involve the… ta… damm… the INFAMOUS MAMAK OF PENANG!  they were protesting against ng wei aik, political secretary to the penang CM and komtar assemblyman (read about it below where i CnP).  and whaddya know!! it was headed by that loud-mouth, king of mamak, abdul ghani!! the same one who is the komtar merchants association chairman who had lead a number of protests, the same one who challenged the CM to a fist fight! and wait!!… that’s now all to make you want to vomit blood… believe it or not, he started a new group, call ‘suara anak-anak mamak pulau pinang’!!!  ya allah!!! and he’s the chief of course!!

this king mamak joker is always talking nonsense. i remember at the 50 years brutal ISA forum, where he lead a pro-ISA group to protest,  he was talking nonsense most of the time, and now too. apparently this SAMPah (Suara Anak-anak Mamak Pulau Pinang, remember) group did not accept ng’s apology had vowed to go on protesting until he resigned.  he said:

can you believe that? it’s like a 10 years old speaking!

i suppose this is just a good excuse for the SAMPah members to create trouble for the penang govt. by keep on protesting, when he said they will continue to protest until ng resign.  speaking of which, this is one thing i’m fed up of too. sikit-sikit… they always said the person must resigned. like few years back when jelutong assemblyman jeff ooi made some blunder, he was asked to resign too. what about those umno bigwig, who were charged for corruption and yet they were retained/re-appointed to be in position?? what they did were million times worst than what ng or jeff did!!

btw, if the protest was against ng, why was it that the banners they carried contained words like “enough mess of guan eng, new CM please”, “melaka rejected guan eng, penang should do the same”? were they protesting against ng or LGE? well, it was obvious that all along they are against LGE! methink they are out to create trouble for the PR govt in penang. paid by umno?

grrr!! penangites had been really really very very fed-up of the mamak in penang. they are always the trouble makers, not the real genuine malays/muslim.  already many of my friends had boycotted mamak nasi kandar restaurant/stalls.  i hardly go to mamak stalls anyway and now it’ll made me all the more not to go.

The protesters, who call themselves Suara Anak-Anak Mamak Pulau Pinang, also want Ng to throw in the towel as state assemblyperson over his actions during a raid at an Indian Muslim restaurant in Gat Lebuh Macallum on Jan 2.

They also want Ng to face action for uttering a racist comment, which Ng vehemently denied, against restaurant owner Syed Kassali Mohammed Aliyar, his family and workers during a raid by Penang Municipal Council personnel.

Despite apologising to all Indian Muslims across the country for his aggressive behaviour and hurtful remarks towards Syed Kassali, the protesters gathered on the 3rd floor of Komtar, after attending Friday prayers at a nearby mosque.

There were shouts of “Takbir” and “Hidup Mamak”; and they also shouted for Ng to come down from the 28th floor to meet them, which he did not.

In the midst of the rally, a fight nearly broke out between a protester and Batu Maung assemblyperson Abdul Malik Abul Kassim’s office staff.

The protester was seen shouting at the man, telling him not to interfere. But other members of the group managed to restrain the angry protester and dragged him away from the later.

The organiser of the march, Abdul Ghani Mohammad Jiman (left), said it was only right that Ng apologise for the incident, which he did today, publicly in front of the media at the Nasi Kandar Mohammed Aliyar restaurant.

“However, he must also resign and he should do it immediately or else we would protest until he does so,” Abdul Ghani, who is Komtar Merchant Association vice-chairperson, told Malaysiakini.

Or else we do not care if he apologises, jumps from the 28th floor of Komtar (Chief Minister’s office) or commits suicide, we will continue our rally,” he warned.

“If he jumps from the 28th floor…we can have a by-election.”

Abdul Ghani, who claims to be the new chief of the Suara Anak-Anak Mamak Pulau Pinang, said Ng has wrongfully intervened in the duties and was involved in raids organised by the MPPP.

“The aggressive act towards the public or businessmen clearly violates his first oath in front of the state assembly speaker, which he took on May 2, 2008,” he told reporters during the rally.

“The public now question Ng’s ethics, good manners and moral behaviour and he has no choice but to resign,” he said.

“His actions have tarnished the chief minister’s and DAP secretary general’s image, which has turned him into a problem and public nuisance plus a big liability to the latter and to Pakatan Rakyat”.

Abdul Ghani also lambasted Ng for acting outside his jurisdiction as the restaurant was outside his constituency – in Pengkalan Kota and not Komtar.

He alleged that MPPP councillor Tay Leong Seng, who took part in the raid on the restaurant, was at the material time not even a council staff member, as his appointment was only effective on Jan 6.

However, it is learnt that Tay’s contract, which ended in December last year, was effective from Jan 1.

“I take this opportunity to remind Ng to resign and the Election Commission to stand by for a by-election in Komtar,” he said.

“Ng and Tay should also be prepared for legal action for the tragedy that befell the restaurant when they raided it early this year,” he warned.

Abdul Ghani ended the press session by saying he plans to register his group officially at the Registrar of Societies in Kepala Batas on Monday.

The group intends to set up a fund to for a panel of lawyers to drag these ‘public enemies’ to court and to protect victims of state government abuses.

It appears Ng’s apology has failed to quell the dissatisfaction of the Indian Muslim community over the former’s alleged remarks of “tutup kedai, balik India”.

The protest today follows an earlier episode last week where the Malaysian Indian Muslim Congress (Kimma) handed over a memorandum to Lim, urging him to act against his political secretary Ng.