You are here: Home › Double standard › the infamous ‘after friday prayers’ protest 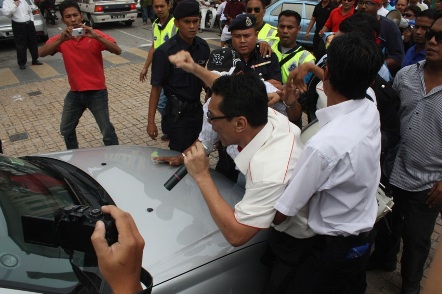 UPDATED:  3 JULY 4.30PM.
take a look at this blog – it revealed an indonesian was involved in the protest. the title says ‘umno hire indonesians to protest at komtar?

yes, once again, they pray and pray and pray inside the mosque on their ‘holy’ day, friday….. then when they came out of prayer…. they suddenly become abusive, aggressive, attacking, like running amok, full of anger – so what they were doing in the mosque praying??? aren’t they ashamed? just out of prayers and behaving so violently! tsk tsk tsk! it was so telling on them and how they practise their faith.

ok in case for some of you uninitiated ones, who don’t know what i was talking about – it was about the street protest by the THE SAMSENG (UMNO), THE KASAR (PERKASA) and THE SAMPAH (SAMP) in penang yesterday (1 july).
(translation: SAMSENG – hooligans, KASAR – rough, SAMPAH – rubbish.  oh and SAMP is the acronym for ‘suara anak-anak mamak pulau pinang’  or ‘the voice of the mamaks in penang’, the one headed by abdul ghani keranda.)

ok here is the report in malaysiakin, from my friends, susan and chia ming. it’s better for you to read it first, before you read my comments.

Some 300 supporters from Umno, Perkasa and an NGO named Suara Anak-anak Malaysia held a demonstration in downtown Penang this afternoon to protest against Penang Chief Minister Lim Guan Eng and Bersih 2.0.

Eight protesters, including SAAM chief Mohamed Ghani Abdul Jiman, were arrested by the police, who deployed some 100 officers and men to thwart the gathering.The protesters marched about a kilometre from the historic Kapitan Keling Mosque to Komtar after Friday prayers.They demanded Lim’s resignation as chief minister on grounds that he had openly thrown his support behind the Bersih 2.0 rally on July 9, which the police have deemed an illegal assembly.

Marching all the way from the mosque along Jalan Chulia and Carnavon Street heading to Komtar, the protestors hit the windshields of cars and violently shoved aside two photographers – one from Chinese press Guan Ming Daily and another from a TV station.

After the arrests and after police sounded the siren for the protestors to disperse, they gathered along Jalan Penang, where several Umno leaders, including Senator Ezam Mohd Nor, gave speeches condemning Lim and the state government.

Ezam, who was former PKR Youth chief, warned Lim that there would be more such protests in the future.

“I believe if we continue to do this, we do not need to wait for the general elections, he would leave before that,” he added, to cheers from the crowd.

At about 3.30pm, another group marched from Jalan Penang into the Komtar area, carrying two ducks, and shouting the name of Penang state exco and Batu Maung assemblyman Abdul Malik Abul Kassim. They were poking fun and imitating Malik’s voice.The police, meanwhile, stood watch and allowed them to carry on with their antics.

Around 4pm, a group of 30 proceeded to the Penang bridge, where they held a separate rally, carrying banners, waving the Malaysian flag and handing flags out to passers-by.

Another journalist from Sin Chew Daily was punched on the back while the protestors warned that they would throw him into the sea if he continued to snap their photos at close range.

This mass of people resulted in a traffic jam along the bridge for about 30 minutes, with the protesters blocking two lanes, but the three traffic policemen present did not take any action.

The demonstrators repeatedly shouted “Guan Eng is a Communist”, dubbing him the “most racist leader in the history of the country”.

The banners carried messages like “Bumiputeras are in government and Chinese in Opposition, is there any hope for the Penang Chinese?” and “Two coalition = two party system”.

In a related development, Penang police chief Ayub Yaakob confirmed that seven protestors were arrested and will be probed for participating in the “illegal” assembly. The ages of those nabbed are between 27 and 46.Ayub said the force had been informed earlier about the rally and had deployed its officers to the protest locations to ensure public order.“We hope this would be the last (protest),” he told reporters at a press conference in Penang.Reporters also met Bayan Baru MP Zahrain Mohamed Hashim at the police headquarters, where the latter said he was there to speak to the CPO about the protest.“I wanted to understand what actually happened,” he said, adding that the demonstration was not a real one (tipu).When told that several journalist were assaulted during the event, Zahrain distanced himself from the matter, saying he was not involved and did not know the full details.

It is learnt that later, Ezam turned himself in, taking the total number of those arrested to eight.

look. the protesters marched about 1 km from the mosque to komtar. marched 1 km. why didn’t the police stop them?? the police should stop them immediately and not allowed them to reach komtar! talk about the bersih 2.0 walk as being illegal… which hasn’t happenned yet and this walk happened right in front of the police’ eyes… and oh it was not an illegal walk to the police? if bersih 2.0 not allowed to walk, why allowed these rubbish (samp) rough (perkasa) hooligans (umno) to walk? of course… what else – DOUBLE STANDARD!  the police belongs to the federal/umno government.

see, the protesters even turned violent to hit the windshield of cars passing by and shoving two photographers.  hmm… so tell us something we don’t know yet. so you see if on 9 july, there were 3 groups of protesters (perkasa, umno youth, bersih) walking, we will know for sure who’s the violent ones.

listen to what this ezam boy said when he warned that there would be more protests coming up:   “I believe if we continue to do this, we do not need to wait for the general elections, he would leave before that,”  he added, to cheers from the crowd.

my toes are laughing! LOL! go ahead and plan for more protests… go ahead, be my guest. the more you protest, the more it will spell the downfall of umno, i tell you because we penangites are behind our CM. we penangites can see your folly.  my dear ezam, if you continue to do this (and i hope you will), for the next general election,  more people of penang will vote lim guan eng, i tell you. umno will fall even harder, i tell you. so i guess i should say thank you to you!

about the group that  carried two ducks and imitate malik’s voice… tsk tsk, ain’t that such a childish behavior (not forgetting it’s personal attack).  but then again, what do you expect from these people with pea brains. for example earlier on thursday,  the leader of the SAMPah group, the keranda guy, was protesting in front of the police HQ against an NGO, and when datuk dr toh kin woon was speaking, he said something like “this man is so old already… he will be dead soon.” ain’t that very childish? (and again personal attack).

can you believe it – while these people were ducking around and poking fun at an assemblyman, the police just stood there and did nothing. NOTHING! maybe the police were amused too and thought it was all in good fun? but what happened if it was the other way round? DAP people poking fun at the DPM or any umno assemblyman? for sure they (DAP) would be told to stop at once or they would be hauled up.  ok say it again – DOUBLE  STANDARD!

same thing happened (the DOUBLE STANDARD!) when the group went to the penang bridge.  they held banners and waved flags right taking up two lanes of the bridge, thus causing traffic jam on the bridge. 3 traffic policemen were there but they just stood by and watch!! you’d better believe it!

yeah yeah so the police chief said 7 people had been arrested but i guess it was just for show and i bet you who knows by now (or at least just after 12 hours) they would have been released without being charged.  strange… the police chief said they knew of this protest beforehand… and he had ‘deployed its officers to the protest locations to ensure public order’.  really kah? then all the more you should stop them at once but why you allowed them to march all the way from the mesjid to komtar???   ahh perhaps that was the reason. the police knew about it already and wanted to allow them to march. why? because they are not from PR party (same thing like saying that two words again – DS).

it’s very strange when i think over – these people marched to protest against an illegal march, which has yet to happen but the march the people were involved in, was itself illegal!  wait… it gets stranger… the police did not stop this illegal march, while the police stop people who did not even march but just wearing the t-shirt.  YA ALLAH!! what is this country coming to???
(reminds me to point you to read kee thuan chye’s piece of the same title, different topic but related)

see if you can access malaysiakini’s photo gallery (if no, i will put up the photos later).

4 Responses to "the infamous ‘after friday prayers’ protest"