You are here: Home › Double standard › madness! madness descent upon our country!

…. courtesy of the federal government and the police!!

i had wanted to blog about this few days ago but didnt’ get into it. ok good to do so today – just one day before 9 july – D DAY!!  this will be me thinking aloud, my random thoughts. me not writing for a 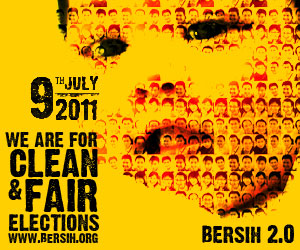 news publication, so it will be very ran

dom and with no flow, no good english. in other words i’m writing for myself… just to get it out.

our country has really gone insane! or i should rather said the government (federal) and the police had gone utterly insane!! just look at what had been happening lately and will happen. these past days, reading the news on the online media here and there really made my blood pressure goes up! so very geram!! so very mad!!

THE GOVT/POLICE IS REALLY MAKING A

MOUNTAIN OUT OF A MOLEHILL!!

a friend who is very non political, reading the news these days, said “what is the fuss there? actually it’s such a small matter – bersih calling for a rally – but it turned out to be such a BIGGGG matter!”

WHY IS THE GOVT/POLICE SO FEARFUL OF BERSIH?

bersih is just calling for gathering of people who wants to see free and fair election.  just that… but the govt/police explode!!! insane! causing chaos in the country!!

bersih is calling for a rally and promise peaceful rally…. but it’s other people who butt in to ‘disturb the peace’ – the peace we have in our country – when the police started arresting people who wear bersih t-shirt, people who gathered to give forums, and so on.

it was said the govt. fear that the bersih rally will be used to overthrow the govt!! oh, is that so? then this means the govt realise they were not like by the rakyat!!

at one stage the PM boasted that he can mobilised more people than bersih. really kah? well yes, but because they were forced or paid!!

and why did perkasa kept mentioning bersih rally, there will be violence breaking out? well not only perkasa of course but others too – umno youth, most umno MPs… and the silat group also got into this madness of “we are ready to fight to death, ready to defend our country” saying that violence will break up at the bersih rally.

even the stadium merdeka management foresee violence during the bersih rally! what? they all suddenly became clairvoyants?

why did some people, including our very own PM mind you, said the chairperson of bersih, ambiga, is threatening islam or against islam??? gosh!! how, where did they get the idea??? such stupidity!!

a friend who said he’s not brave enough to join the bersih rally, and he’s also a person who couldn’t really care about the govt, suddenly said to me “yes i won’t attend the bersih rally but looking at what has been happening lately, this made me all the determined NOT to vote for BN, not ever!!!”

CAN YOU SEE THE MADNESS HERE??

–  the public services dept. (PSD) forbid staff to participate in the rally.

– the education ministry too forbid (issue warning)  teachers and students to participate in the rally.

– police go on a frenzy of road blocking here and there.

– the police can even stop a state organised event!!!!

– restrictions order on 91 persons. ya allah! these people not allowed to walk the streets in their own states!

– declaring bersih as anti islam (even the PM! latest now 7 july is that cina wanna be muslim ridhuanT)

– using the army to scare us. remember the exercise “disperse or we’ll shoot!!”?? of course saying they will deploy the army if necessary.

– even and old man who is a poet was detained and intimidated! a poet who expressed himself in his artistic form.

ok it’s going to be 0002 hrs now, my sleeping time so my thoughts end here. maybe if tomorrow i have time i’ll continue.  i’m going to leave some important links here so that i can come back to refer them.

aliran – no to bersih, yes to kotor?

these are from my two favourite writers:

kim quek – the day when the people rise up july 9

finally, do watch the videos from komas on your rights when facing the police.