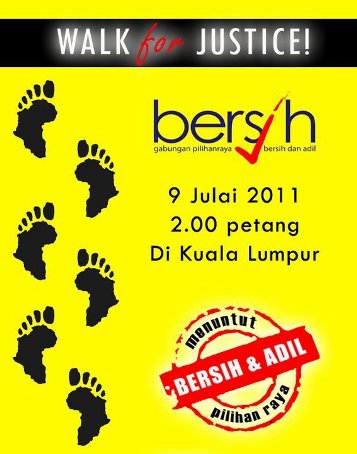 wokey! two more weeks to go! i’m so excited! i’m looking forward to the bersih 2.0 rally and i bet you there will be an exceptionally huge turnout.

so much had been happening these days regarding bersih as you would have read (or heard) about it in the news here and there.  i have not been updating my blog (still no time to ‘fine-tune’ it) but i have been updating about the bersih news on my facebook regularly.

i’m sure many of you are aware of the recent happenings concerning bersih already so there’s no point for me to repeat them here. you know, like how perkasa and umno youth wanted to ‘kaypo’ to butt in the bersih rally – to have a rally of their own on the same day.  then about the bersih organising chairperson receiving death threat via sms.  the latest news we read was about the police stopping the political parties who distribute leaflets on bersih.

the government is sure getting very paranoid… or rather so fearful! why ah? what to fear? bersih is simply calling for free and fair elections, that’s all. if the govt. is doing all it could to stop the rally or to intimidate organisers/public into attending it, it only shows they do not care for a free and fair election. ayoh! like that eh… and you want to call malaysia a democratic country?? bullshit!

btw, do you know that bersih has gone global? malaysians who are studying or working abroad are supporting bersih too and in many countries, there will be simultaneous bersih 2.0 rally going on, on 9 july.

hey, anyone in penang, who like to attend the bersih 2.0 rally as a group? a few friends and i (including BK ong from MEO-net) are planning to organise a group of us going together. if you are interested, do contact me at lucial at gmail dot com.

ok i’ll end here by listing out the 8 demands by bersih.  here it is in bahasa first, just the demands, followed by in english, with explanation. 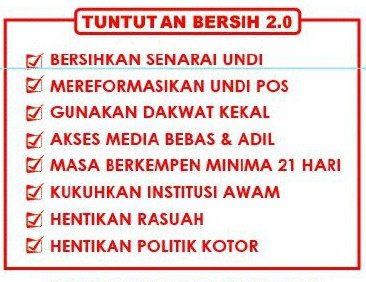 1. Clean the electoral roll
The electoral roll is marred with irregularities such as deceased persons and multiple persons registered under a single address or non-existent addresses. The electoral roll must be revised and updated to wipe out these ‘phantom voters’. The rakyat have a right to an electoral roll that is an accurate reflection of the voting population.

In the longer term, BERSIH 2.0 also calls for the EC to implement an automated voter registration system upon eligibility to reduce irregularities.

2. Reform postal ballot
The current postal ballot system must be reformed to ensure that all citizens of Malaysia are able to exercise their right to vote. Postal ballot should not only be open for all Malaysian citizens living abroad, but also for those within the country who cannot be physically present in their voting constituency on polling day. Police, military and civil servants too must vote normally like other voters if not on duty on polling day.

The postal ballot system must be transparent. Party agents should be allowed to monitor the entire process of postal voting. 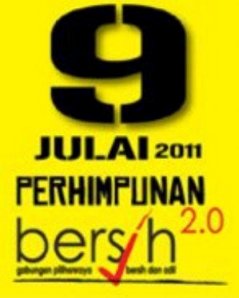 BERSIH 2.0 demands for indelible ink to be used for all the upcoming elections. Failure to do so will lead to the inevitable conclusion that there is an intention to allow voter fraud.

5. Free and fair access to media
It is no secret that the Malaysian mainstream media fails to practice proportionate, fair and objective reporting for political parties of all divide. BERSIH 2.0 calls on the EC to press for all media agencies, especially state-funded media agencies such as Radio and Television Malaysia (RTM) and Bernama to allocate proportionate and objective coverage for all potlical parties.

In particular, the EC must perform its constitutional duty to act independently and impartially so as to enjoy public confidence. The EC cannot continue to claim that they have no power to act, as the law provides for sufficient powers to institute a credible electoral system. 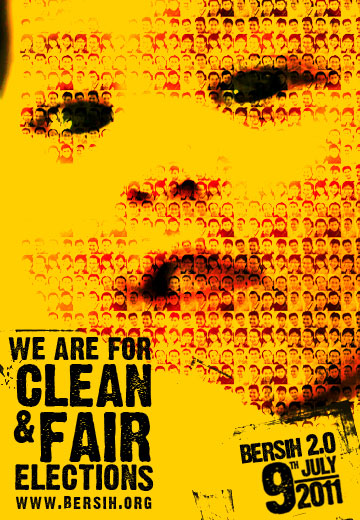 7. Stop corruption
Corruption is a disease that has infected every aspect of Malaysian life. BERSIH 2.0 and the rakyat demand for an end to all forms of corruption. Current efforts to eradicate corruption are mere tokens to appease public grouses. We demand that serious action is taken against ALL allegations of corruption, including vote buying.