You are here: Home › election › my march for the real 1malaysia 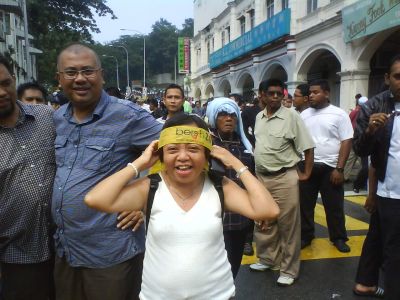 UPDATED 17 JULY:  my story appearing in:

this was what i wrote and sent to a few online news portal. well, malaysiakini published it today but knowing that only subscribers can access malaysiakini, i’m copying what appeared in malaysiakini here for the benefit of non malaysiakini subscribers. er… also, i want this to be on record in my blog. 🙂

My march for the real one Malaysia

EYEWITNESS.  I had, long before July 9, already made up my mind to attend the Bersih 2.0 rally in Kuala Lumpur. I missed the 2007 rally, so I was very determined to make it to this one.

I even started a ‘Penangites attending Bersih 2.0 rally’ event page on Facebook, to try to see how many Penangites would go, and maybe arrange to go together.

Unfortunately, with all the clamping down the police were carrying out, I was advised not to go in a big group. In the end, I went with two of my Saya Anak Bangsa Malaysia (SABM) Penang friends, Stanley and Howie, in Howie’s car.

We took along our yellow coloured T-shirts, but we did not wear them. We hid them in the car, and later, Howie and Stanley hid theirs under the clothes they were wearing, while I hid mine in my backpack. I had painted my nails yellow, for I figured that if I could not get to wear a yellow T-shirt, at least I would have something yellow on!

We left Penang early, at 5am, and when we reached Sungei Buloh about 9am, we found the road to the KL city centre jammed up because of police roadblocks. We then turned off to Bangsar and parked the car, and from there took the LRT to Masjid Jamek.

It was relatively quiet at Masjid Jamek, since we were early. Some policemen were seen loitering, here and there. We decided to walk to Jalan Bukit Bintang and hang around the shopping malls. Since all the roads had been blocked, it was a breeze strolling along the city roads, which would have been jam packed on normal days.

We hung around some shopping malls, and at the same time looked out for updates on the rally from Stanley’s Twitter and from a friend of mine in KL. We decided that we should join a group, and learning from my KL friend about a group gathering in Chinatown, we headed for that place.

Thank God, there was a taxi driver who was willing to drive us there but he dropped us off near Central Market, from where we walked to Chinatown.

‘And the excitement built up in me’

Indeed there was a large group there – about 1,000 people. They were standing around, chatting, but after 10 minutes, they decided to march. A few young men led the march, with their arms locked. I felt excitement building up in me as I joined in the march.

As we walked, we chanted lots of slogans, including “Bersih! Bersih!”, “Reformasi, reformasi!”, “Allahu-Akbar!” Although I’m not a Muslim, I joined in the last cry too. It was a good feeling!

I didn’t know where we were going to march to but I couldn’t care. As we passed people who were standing by the sides of the roads, we shouted to them to join us. Some of them clapped and cheered as we marched past them By then, it was around 1pm.

We then stopped in front of Menara Maybank and I realised there was someone in front of the bank, speaking, who I later learned was Hatta Ramli of PAS. By then, we had reached the Maybank headquarters, and Howie became separated from me and Stanley.

Stanley and I were busy taking pictures. I didn’t realise that the crowd had grown so big until Stanley said to me “Wow! Big crowd” and looking all round me, I was totally astounded! There were as many as 5,000 people. It seemed that some other groups marching from Puduraya had merged with our group at Menara Maybank.

We stood there listening to the speeches. In between the speeches, there was plenty of chanting, of course: “Bersih! Bersih!”, “Tukar, tukar! Tukar SPR!”, “Reformasi! Reformasi!”

As I stood there and turned to people around me, whoever I got into eye contact with smiled at me. It was a ‘feel good’ moment (borrowed from NTV7) for me, realising that all of us felt the true 1Malaysian spirit right there. We were strangers, yet we smiled and talked to one another like old friends.

Though totally immersed in the speeches and the chanting, I suddenly heard someone shout out, “Bersedia ya! Water cannon akan datang.” Five minutes after he said that, I spied a menacing red truck moving towards us… and without warning, jets of water shot out! Everybody screamed, and ran helter-skelter! I quickly ran up the stalled escalator at Menara Maybank, to enter the lobby.

It then dawned on me why they were rushing down – tear gas was rising into the lobby! For a moment, I didn’t know what to do. Should I go up or should I jump over the wall? But I was afraid I might not be able to jump, so I decided to move on to the lobby.

Since the lobby was high above the road, only a little tear gas reached it. Still, my eyes started to sting. The smell was terrible! About 20 people in the lobby were gasping and coughing. One young man was literally crawling on the floor. I guess he was fully hit by the tear gas when he was down on the road.

I quickly took out my packet of salt, bottle of water and mini towel (yes, I came prepared). I put some salt into my mouth, poured the water on the towel and covered my face with it.

Then, a man walked up to me to ask me for some salt, which he took to the man crawling on the ground in pain. Others also started to pinch some of my salt. However, I was not the only one with salt. I heard one man going around, calling out, “Garam! Garam!”

I decided to stay in the Menara Maybank lobby until the police left. I had a good view of all that was happening on the road. Two FRU trucks were parked right in front of the building, with several policemen standing in front of the trucks. I also saw some people being arrested and taken to the trucks.

It was then that I called Stanley to find out where he was. He was at Puduraya and told me that they were trapped there, with police at both ends of the road! He advised me not to come down from the Maybank lobby, for police were still busy running around on the road arresting people!

I was shocked, for I thought the police was coming up to the lobby to arrest the few of us who were still there. Where could we run? Nowhere! However, the policeman stopped at the foot of the escalator and looked around, before moving away. Phew!

Then it started to rain. What a relief, I thought to myself, that the rain came just minutes after the second round of tear gas was fired. The rain will lessen the effect of the tear gas. Even the heaven is on our side!

I waited until the rain stopped. Then the woman security guard on duty at Menara Maybank came to chase us off. She was quite polite though. She said that when the tear gas and water cannons were unleashed earlier, she had given us chance to come up and remain in the lobby but now that the police had left, she wanted us to leave the lobby. Fair enough.

I went down and called Howie to find out where he was. He was with a group on Jalan Hang Jebat and I decided to join him there. I was pleasantly surprised to see a large group there, standing right in the centre of the traffic intersection.

Howie was was having fun with his Bersih headband, ‘canvassing’ for people to take pictures with him wearing the headband. “Come on,” he said, “For souvenir!” Quite a number of people obliged

We were standing there for some 15 minutes, just chatting, when we heard some noise from a distance away and to our delight, we saw a group of people marching towards us. We all waved to them and called out “Yeh! Yeh!” while some clapped.

When this group reached us, we all started to march towards the Merdeka Stadium. We marched and chanted, while some were chatting cheerfully with one another. The atmosphere there was simply great!

An elderly beggar with a small, cute cat on his shoulder was walking with us too and many people teased him. Howie even put a Bersih headband on the cat and took a photograph.

There was a crowd there already present as approached the stadium, and together, we probably made up some 10,000 people. Of course we were not allowed to enter the stadium, so we just stood there and talks more about what was going on around us… and, of course, having a field day taking photographs, with Howie again ‘canvassing’ for people to take pictures with him and his Bersih headband.

At 4pm, Howie received an SMS saying the Bersih 2.0 organising committee wanted us to disperse. Well, the original planned rally was from 2pm to 4pm, so naturally, at 4pm, we had to disperse. Howie and a few others shouted “Bersurai, bersurai! Dah pukul empat!” and remarkably, everyone did! We were truly disciplined!

Howie and I decided to catch the LRT to Bangsar, where our car was but to our disappointment, the LRT service had been shut down. So we walked to the KTM railway station to catch the Komuter to KL Sentral.

The station was crowded with Bersih supporters, all waiting to board the train. When it arrived and we tried to rush in, it was sardine-packed! However, nobody complained as at that moment, we knew we were all Malaysians with one aim – to seek clean and fair elections.

Somebody in the train even shouted softly, “Bersih!” And someone jokingly said the train will take us straight to jail!

We reached KL Sentral and met up with Stanley, and at 6pm, when the LRT service was resumed, we took it back to Bangsar, got into our car and headed back to Penang.

I had spent about six hours walking up and down much of the inner KL city! Masjid Jamek, Bukit Bintang, Puduraya, Pasar Seni, Chinatown, Jalan Sultan, Jalan Hang Jebat and the surrounding areas.

My legs ached like mad the next day, but it was well worth it. I walked for democracy in our country. I walked as an Anak Bangsa Malaysia who wants to save her beloved country.

What I found most enriching from the experience was a sense of euphoria to see people of all races, sizes and colours, coming together in a spirit of unity and joy, and with one common aim. This is truly what we call 1Malaysia!