You are here: Home › announcement › lodging police report over the desecration of our holy books 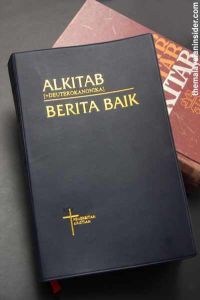 UPDATED on 23/3, 0940 hrs – the police report is canceled for the moment in the light of new development from the govt.

a colleauge of mine, stanley, had organised a mass police report for today. this is his message:

Good day to all

In regards to the defacement of the bible (Al-Kitab) by the Home Ministry of Malaysia, police reports will be lodged in Penang, Kuala Lumpur, Ipoh, Johor, Sarawak and Kedah tomorrow (Wed 23/3) at 3pm against the Government of Malaysia. The government has disrespected our holy bibles and have committed a crime against religion.

In Penang (Pulau Pinang), 20 people will be lodging the report in the Petani road police station and a official press conference will be held at 4pm at the police station

All members from the press are invited to cover this issue.

anyone who are free, do come and join us, ya.
btw, first the govt. defaced the bible with a lengthy chop, as i blog here; now the govt. suddenly backs down… and… horror! further defacement! why?

The Najib administration relented today to demands from the Church not to attach serial numbers to impounded Malay-language Bibles as it prepares itself to face a Christian-majority electorate in Sarawak in the coming state polls.don’t be too happy! here’s WHY:

It also promised that all future shipments of such holy books written in the national language would be released as long as they sported the words “For Christianity” in the Arial font, size 16, either printed at source or stamped at the receiving port.

don’t be too happy! here’s WHY:

For the consignment of 35,100 Alkitabs still held in Port Klang and Kuching Port, the administration said it was willing to provide “stickers” to cover the present stamps and serial numbers already marked on the books.

can you believe that? the bible with a stamp on it, then over the stamp, a sticker on it!! ya allah! i’m not appease at all. in fact, i felt more outrage. methink it’s better for the importers not to collect the bibles at all. just leave the bibles there.  however, to get new bibles, why i wonder, ‘christian donors’ have to pay for them. who are these so called christian donors? why can’t the govt. pay for the new bibles as after all it was the stupid govt who stamped the bibles.

then the govt. decided to stamp ‘for christianity only’ on the bibles (not forgetting specify the font and size too!). huh? if you are so scared of your own muslim fellows reading the bible and suddenly feel the urge to convert to christianity, then stamp ‘not for muslim’ lah!!  many non christians (even those moderate general muslim) don’t mind reading the bible.  when you stamped ‘for christianity’ it means you are restricting our faith. so i was right after all, eh, when beginning many years back, i had been saying there’s no freedom of religious practise in malaysia!

gosh, i don’t want to talk further as i’m getting pretty stressed up just talking about it (after yesterday getting headache reading so much about sex). i’m going to leave you with this one very good letter from ng kam weng. do read! he explained why defacement of the bible is desecration.