You are here: Home › christian › who’s the one inviting trouble??

definitely not the christians, but them: 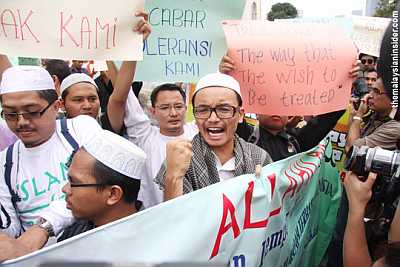 they are members from PEMBELA. read about it at the malaysian insider.

just look at them! so angry. protesting with banners.

rightly, MCCBCHST came out to criticise pembela for lodging a police report and for what they had said. “it’s intimidating” they said. yes indeed. when they said the christians are inviting trouble, it sounds so much like a threat.

‘inviting trouble’? why do you say that unless it is you yourself who wants to give the trouble? reminds me of the saying ‘do not look for trouble unless trouble trobules you’.  the impounded alkitab issue has nothing to do with them at all, so why they want to meddle and look for trouble?

initially i want to respond paragraph by paragraph to all the nonesense pembela had said, as from the malaysian insider… but i see too many nonsense and silliness there, that if i were to do it,  it will be very stressful for me.  go on… you go and read it for yourself and you will see what i mean.  well at the moment, there’s only one thing i like to point out. they were grumbling why did the govt. allow a christian leader to mediate in this issue when it should be a muslim leader. huh?? have they gone mad? it’s precisely the issue about christianity that the govt appoint a christian leader. what the hell does a muslim leader has to do with this issue?

the way pembela came out with their strong seditious comments, i’m afraid they are making matter worst. the issue, i think, is about to die down but, here they come with their provocation.  i’m concerned that this might escalate into something more serious.  najib’s so called 1malaysia administration must do something fast!

NOTE:  the CFM had a meeting yesterday with lots of major church organisations, church leaders and also the alkitab publisher and they will come out with a statement today at3.00pm. watch out for the statement!

2 Responses to "who’s the one inviting trouble??"