You are here: Home › announcement › Protect and defend Christians’ rights to use the Alkitab

PROTECT AND DEFEND CHRISTIANS’ RIGHT TO USE THE ALKITAB

We are grateful to Almighty God for bringing together Christian leaders from across churches in Semenanjung, Sabah and Sarawak to address the current controversy surrounding the impounding of Bahasa Malaysia Bibles, the Alkitab, at Port Klang and Kuching. This decision weighs heavily on us because of the implications not only for Christians but for all Malaysians.

We are united in our reaffirmation of the freedom of religion and worship. Therefore, our position is that there should be no restrictions, proscriptions or prohibitions whatsoever on the Bible or the use of the language of our choice in the practice of our religion, as it was in the days before and after the formation of Malaysia.

Christians, like any other Malaysians, are not demanding for anything beyond our constitutional and fundamental human rights as enshrined in Article 11(1) of the Federal Constitution and Article 18 of the Universal Declaration of Human Rights.

The current controversy surrounding the Alkitab is just one of many issues that concerns Christians. There has been a systematic and progressive pushing back of the public space to practice, to profess and to express our faith. For example, the wearing and displaying of crosses and other religious symbols, using religious words and constructing places of worship have been restricted.

When Christians express this concern, we do so not just for ourselves but on behalf of all Malaysians. Our faith forms a critical component of our identity as Malaysians in nation-building as enshrined in the first pillar of our nation’s Rukunegara: Belief in God.

As regards the offer made by the government on 22 March 2011, we respectfully state that this does not address the substantive issues. In point of fact, our previous offer made in 2005 to use the term “A Christian Publication” was only honoured in respect of one shipment of the Alkitab. Subsequent shipments were similarly held up and subjected to further arbitrary conditions for release.

In order to move forward, we call on the Government to commit itself once and for all to remove every impediment, whether legal or administrative, to the importation, publication, distribution and use of the Alkitab and indeed to protect and defend our right to use the Alkitab. 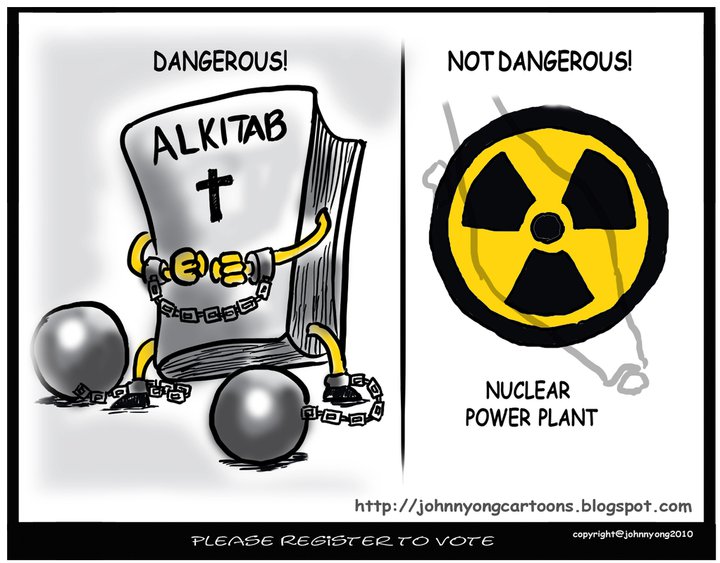 his includes revoking all orders made under the Internal Security Act 1960, which have declared the Alkitab as a threat to national security. Neither can the Alkitab be considered a threat to public order under the Printing Presses and Publications Act 1984. We categorically reject the characterisation of our Holy Scriptures in this manner.

Instead, we see our Holy Scriptures as providing enlightenment and direction. In the words of the psalmist, “Your word is a lamp to my feet and a light for my path.” (Psalm 119 : 105). In the New Testament is stated the teaching that we hold dear and true : “All Scripture is God-breathed and is useful for teaching, rebuking, correcting and training in righteousness, so that the man of God may be thoroughly equipped for every good work.” (II Timothy 3 : 16)

We remain committed to work with the Government for a viable and long-term solution where the detailed processes and procedures are made clear and unequivocal and so long as our fundamental liberties as enshrined in the Federal Constitution are not infringed.

As for the copies of the Alkitab that have been impounded and desecrated, we reiterate our position that the action of the Ministry of Home Affairs (KDN) in stamping the Bibles amounts to an act of defacement, disrespect and treating with disdain the holy book of the Christians.

Given the unfortunate experience of KDN’s tendency of taking arbitrary action without consulting affected parties or respecting the religious sensitivities of the Christian community, any decision to collect copies of the Alkitab which have been stamped and serialised would be with a view to prevent the possibility of further arbitrary acts of desecration, disrespect or destruction being committed against the Holy Scripture of the Christians by KDN and its officers.

We have left it to the 2 importers to decide whether or not to collect the Alkitab, based on their different specific circumstances and level of trust in the authorities and the processes in their local context.

Nevertheless, no matter what their decision is, we remain united in our common stand to uphold the principle of freedom of religion which includes the free availability without hindrance or obstacle of the Alkitab and all sacred scriptures in Malaysia.

We continue to call on all peace-loving Malaysians to pray for a dignified resolution to these critical issues in the life of our nation.