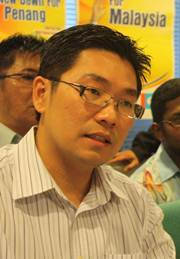 my ADUN (pantai jerejak, under bayan baru, penang), YB sim tze tzin, had won the PKR bayan baru divisional polls. will he be selected as a candidate come the next general election to contest for bayan baru MP’s position… a position which is now vacant!! yesirree! vacant! because i do not look to zahrain as my MP ever since he jumped out of PKR to become independent. 3 years ago i voted for him because he was in PKR, yes i voted for the party because i do not want to vote for BN, nor do i want to vote for an independent… if there was one. i wanted either PKR or PAS. since zahrain had left PKR, he should resign from his MP post. as i had put up the sticky post in my blog here, yes, bayan baru constituency has no MP now!!

well i hope YB sim can become my MP. i had met him and spoke to him several times. he’s a nice, friendly, humble man.  he  is a great ADUN who takes good care of the people/communities under him.  i usually saw him at forums, talks, protest, etc, organised by NGO, which means he support NGO.  you know, i had been staying at my low-cost flat for more than 10 years, and early this year was the first time, i attended a dialogue session initiated by him regarding our flats. see, he is not a proud man who turn a blind eye to not rich people who live in low-cost flat (like me lah. now you know).

ok here, i re-produce to you the article from malaysiakini where terrence netto wrote that YB sim’s win could pave a good future for PKR (click on ‘read more’ to read).  oh i’d better point out that in one of the comments under this same article, someone mentioned that he was present at the election and that the whole election was manipulated by YB sim,  and YB sim was involved in money politics, that was why he won.  hmm…. really?

Sim’s win is PKR template for the future

It’s too early to say, but the PKR Bayan Baru divisional elections last weekend may well be a template for the party’s future.The run-up to the elections quickly crystallised into a contest between the past and future in Malaysian politics. Simply put, this past is race warped; the future, if a PKR-led opposition coalition wins the next general election, would accelerate the unshackling of the Malaysian polity from tethers of race that have for too long bound it.

The triumph of Sim Tze Tzin (left), the PKR assemblyperson for Pantai Jerejak, who polled 499 votes to competitor M Nyanasegaran’s 260, is seen as a victory for the new politics that PKR is trying to espouse.

In Sim, the contest had a candidate who mirrors PKR’s future as Nyanasegaran, formerly of Gerakan and MIC, is a throwback to a past of Malaysian politics that PKR’s fondest supporters firmly desire to see consigned to oblivion.Nyanasegaran, older to the mid-thirtyish Sim by two decades, ought to have triumphed, given that when he joined PKR after the tsunami of March 2008, he brought into the party, as he pledged to, 3,500 members to beef up the already existing 1,500 members.

In the event, very few members whom he had registered with PKR Bayan Baru turned up at last Saturday’s divisional elections.In all some 800 members out of the total 5,500 attended the division’s elective annual general meeting. Observers were expecting busloads from addresses in Perai, Bukit Mertajam, Kulim and Sungai Petani, to arrive with supporters of Nyanasegaran who had furnished these locations when he had his contingent registered. Those busloads didn’t materialise and observers were left with the surmise that the Indian Malaysian complement of PKR, said to have gone up to 40 percent of the total 400,000 party membership, is an apparition best known to ex-MIC regional sovereigns who joined post-tsunami and brought with them scores of their supposed wards.to have triumphed, given that when he joined PKR after the tsunami of

Zahrain’s former aide Nyanasegaran operated in the Bayan Baru division as aide to then PKR MP for Bayan Baru, Zahrain Mohd Hashim, who quit the party last February in a pall of vituperation against Chief Minister Lim Guan Eng and PKR supremo Anwar Ibrahim.Like Zahrain, Nyanasegaran had expectations of immediate reward for his feat in bringing in 3,500 new members; only that he was more discreet than his former patron and BN colleague.

In 2009 and this year, he put himself forward for a state datukship and asked to be included in the Penang Hindu temple endowments boards. These requests went unmet.Normally, when you are new to a party, it’s best you take the seats at the rear and wait for others to notice your good work before you step up to the plate.But within two years of joining PKR, Nyanasegaran put himself up for the division chBut unlike Nyanasegaran, PKR was engineer and MBA-holder Sim’s first political port of call while the former had been around the block. Sim became an aide, principally on Chinese affairs, to Anwar Ibrahim four years ago. Schooled at Penang’s top Chinese spawning grounds, he furthered his studies in engineering in California, worked there for a while and took his MBA before returning to Malaysia to plunge into life of politics.After his election as PKR state representative for Pantai Jerejak, his maiden address to the state assembly was favourably cited by the speaker as a model of reasoned exposition.In his contest with Nyanasegaran, Sim had been an opponent who held to the middle notes and resisted the extremes of stereotyping and wild accusation.His victory puts him in pole position to be the PKR parliamentary candidate in a faShould he be the candidate and should he regain the seat for his party, the Penang assembly’s loss would be the federal parliament’s gain. And the polity’s struggle to free itself of the race canker that has long blighted its existence will have advanced a step.

One Response to "will my ADUN become my MP?"