You are here: Home › penang › PKR member again – attacking its own coalition partner in public! 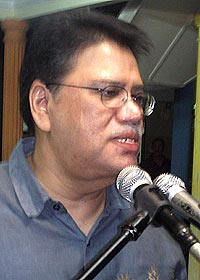 oh gee, do you know zahrain is my MP? and i voted for him! or rather i voted for PKR. hated umno too much to vote for PKR, not caring who the candidate was (as many people at that time, even if they put a cow as a candidate, voters will vote the cow instead of umn0).

regret. regret. but many months ago already regret when a little bird told me that zahrain, an ex umnoputera, is a very corrupted person.

so why is zahrian lambasting penang’s CM, LGE so badly?  he sounds like a dis-satisfied, jealous, cry-baby! what many commenters in malaysiakini said were very right indeed, like many said, now he no longer has money coming into his pocket, so he made noises! haha.

He calls LGE a dictator just because he can’t get what he wants. He should go back to Umno to satisfy his needs. Voters in Bayan Baru should hunt down the wolf.

zahrain sounds like another zulkifli nordin in the making. attacking his own party components members in public!

zahrain had said that penang would be better off without LGE or DAP as govt. how is he so sure? who is he to speak for penangites? in fact, i find penang becoming better with LGE/DAP-led govt.

ok, i’m going to copy several of the comments from malaysiakini which i found interesting, so need to share (because not many people read malaysiakini lah, having to pay).  please click on ‘read more’ below to continue reading.

Yeah, got back to UMNO, Zahrain but before that also resign from your MP post. You won the seat because people supported PR not you. To PKR, you guys really got to be critical in picking candidates; identify trojan houses like this one and don’t field them!

by Andrew Lee – 2 hours ago

The problem with PKR lies in the quality of their reps both in Parliment and at the state level. The vast majority are losers from the infighting in their former BN parties. Next GE will be different. Now that PKR has shown its electability, PKR will be spoilt for choice for its candidates. The likes of Zahrain will be history.

Another PKR member of UMNO mindset, who has realised there is no gravy train to ride on in Penang, hence the so-called disgruntlement. To those who see this as another problem in PKR/PR, let me say that it is a desired attrition process to strengthen the party and coalition. Get rid of the “Zuls” and “Zahs” now, rather than later when PR is running the federal government and being held hostage by such “Zuls” and “Zahs”, especially when it is a thin majority. Seeing the development in this light and we see a hopeful future.

by Disgusted Malaysian – 8 hours ago

This nerd is just using the excuse of his enmity and dissatisfaction with LGE & the DAP-led Penang State govenment to justify his impending departure from his party and eventual cross-over to join PCM or become BN-friendly. It’s as simple as that ! Blame in all on the incompetency or dictatorial style of Guan Eng so that he can still survive in the next GE? PKR can stand alone without DAP in Penang, what a joke? Let me tell Zahrain and others like his mentality that the only reason he won in Bayan Baru was because DAP supporters gave their votes to him despite him being a Malay as he was part of the Opposition front ! Penangites must be deeply disappointed with him and his party ! PKR’s vetting of its candidates has shown up so many flaws and poor judgement !!! Poor Anwar must be having a big headache now.

by Disgusted – 9 hours ago

Many of the Pakatan people who were ex UMNO still have the racial and religious mentality of UMNO same as Zulkifli. They still think that even though they are minority in State Assembly but being a Malay they must be treated as a Bumiputera wanting 70% of all posts and contracts awarded under quota to them without tender as it is their right under NEP. When they don’t get it they raise a hue and cry that Malays are sidelined and make racist remarks that the Non Malays are dominating the Government and that the Malays are subservient to Pendatangs it must revert to the UMNO formula etc. Why can’t they accept meritocracy and compete with every one instead of having the UMNO like crutch mentality. That is why we have so many projects all over the country which are abandoned, substandard and in danger of collapse or some didn’t even take off after payment has been made to these so called Contractors are living like in palaces and driving expensive cars and living like dukes.

by Sisters in Islam – 9 hours ago

So, the Umno plant has been finally un-masked! People and voters of Bayan Baru, please pressure this selfish prig and Umno agent to resign if he leapfrog over to BN or pretends to be a so-called independent MP!

by Concerned – 10 hours ago

I know this guy well as he is a formal class mate. I think the sooner he leave PKR the better it is for all. I do not think he acts in the interest of Pakatan since day one. Please leave by all means and see what happens in the next election.

by Green Penang – 10 hours ago

Datuk Zahrain, we voted for you in Bayan Baru because your party stood against BN. Don’t betray us. Work out your differences with LGE, but do not betray the trust voters put in you for a better Malaysia.

PKR is the worst party in PR. With the likes of Jamaluddin Mohd Radzi, Osman Jailu, Zulkifli Nordin and now another UMNO-wannabe Zahrain. PKR is not the glue that binds DAP and PAS together, but is the wedge that drives PR state apart, the sheep in wolf clothing, poor-man’s UMNO party as put by Zaid Ibrahim. Next GE-13, please make sure you don’t waste your vote on PKR !!

DS Zahrain. I suspected something amiss when you opted to be awarded a Dato Seri title in the state award list. Not one of the DAP leaders, including party stalwarts like Lim Kit Siang, Dr Chen Man Hin or Karpal Singh, was recommended for any award even though they had contributed far more to the state than you. Basically leaders should kow tow to good governance and rid ourselves of political patronage that is the root of all evil in BN/UMNO. If you want to resign from PKR, resign too from your Bayan Baru parliamentary seat. I did not vote you to be BN friendly, otherwise I would have cast my vote for the MCA candidate. If not, I’ll pee on your ancestor graves for cheating my vote which was meant for PKR.

by Truth Seeker – 11 hours ago

After all he’s an Ex-UMNO man!! Anwar, Anwar…. how r u going to handle this time around? Another Gag order?? No Please; U talk abnout Pakatan Solidarity when ur PKR Boys relentlessly attacking Coalition Partners be it PAS or DAP!! Anyway, this dog is baarking because of Contract, n MONEY$$$!! Anwar, Yes we agree, You are one of the REASON for Pakatans conquer of 5 states; but ur uncompramised patience towards this JACKASSES, will surely hurt ur ratings n PR at whole….. PLEASE DO SOMETHING ANWAR

Zahrain, if you have genuine complaint, you should list down the specifics so that the rakyat can evaluate. Here you are making sweeping statements without any supporting information. You claim LGE is a dictator, does not pratice CAT, PKR is subservient to DAP, etc. Where are the specifics? Further, is it just your opinion that PKR can survive on its own without DAP? Please dont behave like a spoilt brat ok.

Zahrain, so is DAP kowtowing to PKR in Selangor? You talk like disgruntled employee in an office. Just because you are in PR, you talk like this. LGE will take this as democracy at play. Even Obama got verbally bashed by his own Democrats people everyday. Some said because he is black. If Zahrain is in BN he will not dare to talk like this to Adnan, Pahang or Rustam Ali, Melaka. Because that will spell the end of his post in the government and his lucrative salary and overseas trips. You think all BN CMs and MBs are so great that no BNers have grudges? It is just because they are controlling their future. People who can fend for themselves like Zaid Ibrahim, Tan Kwee Kwong and Chua Jui Meng are brave people who can relinquish their posts and speak up. If Zahrain were to leave PR it will be one-time pay off and the end of his political career like Ezam Mohd.

“Zahrain believes that PKR could survive without DAP, being a multiracial party”. Personally, I don’t think so Zahrain. PKR is the weakest component in the PR coalition, and your behaviour coupled with that of the likes of Zulkifli Nordin, and the unwillingness of its leadership to do what’s necessary, proves that. Are you a party member because of its principles? Cos if it was principles, why is there even a hint of your potential departure to UMNO/BN? Step out of PKR, but remain an Independent. Unless of course, you were a musuh dlm selimut all along….What principles could UMNO/BN possibly have that you would even want to consider moving over? Looking at your comments, “blaming BN administration” – sounds like a UMNO apologist la. BN produced s–t 52 YEARS! So I think it is ok for the present gov to take a bit of time to do an expose. Zahrain, if you do join UMNO/BN, one word: GET LOST. NO LOVE LOST. Pg voters will know what to do with the likes of you next round.

One Response to "PKR member again – attacking its own coalition partner in public!"