You are here: Home › penang › “we’ll be with you through thick and thin, and we will swim and sink with you” 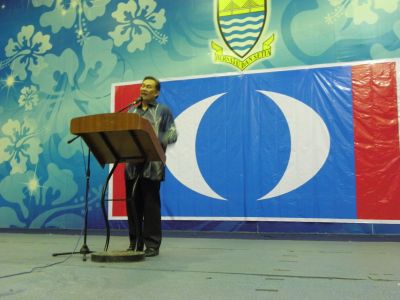 when i arrived at the venue, YB sim tze tzin was speaking, followed by penang’s DPM 1, dr mansor. he was talking halfway when anwar arrived. all press and photographers rushed forward to take pictures of him! i didn’t… but i waited when he went up the stage… only then i took a few pictures of him.

let’s see the little of what i can remember anwar said (i did jot down some points). i found it quite difficult to catch what he said since he spoke both in english and bahasa – rojak! should have either speak all in english or all in bahasa, or at least say 10 mins english, 10 mins bahasa (separate).

anwar talked a lot on all the races should work together and the government must take care of all races. throughout his speech now and then, i heard “orang melayu, orang cina, orang india, orang iban…..”.  (btw, he just came from another ceramah and after this, will be going for another one).

he brought up the issue of ‘defending malay rights’ when he mentioned about the issue where DAP’s tony pua proposed the 7% discount for bumiputera buying property over RM500K be done with – at that proposal, many umnoputera and malay NGO jumped skyhigh and said that it is the rights of the malay to have this discount, so they lodged police report because they want to ‘defend malay rights’.

so anwar said that we should not talk about defending malay rights but we should talk about defending the rights of the poor and marginalised – the poor and marginalised of all races.  and he also said we shouldn’t talk about injustice of one race only but injustice of all races.  he also brought up (just in 1 sentence) about the ‘pengkhianat’ (traitor) from bayan baru. (we all know who he is, don’t we),  and he admitted they had not choose their candidates well.

ok for more pictures of the ceramah, please go to my facebook album.  from there you can see the album of another person too (but only if you are on facebook too. if you are not, what’s stopping you? go sign up!).