attended the anti-ISA candlelight vigil last night at dewan sri pinang, after i attended the freedom film fest. there were so many people – about 300 i think. last friday i heard there were only about 80 or so. i guess this friday (i mean yesterday), it being near the hari raya holidays, many people around. still it can’t beat the first night – on 14 sept – vigil where there were 400 people.

i knew there were over 200 people because i was giving away yellow ribbons, of which i have 200 pcs. i have about 10 balance but there were quite a number of people (esp. those who came late) who did not get the ribbon. this ‘yellow ribbon campaign’ was initiated by one of our church member. she wanted to distribute them in the church this weekend, and knowing that i’ll be attending the vigil last night, she gave me 200 pcs to distribute. 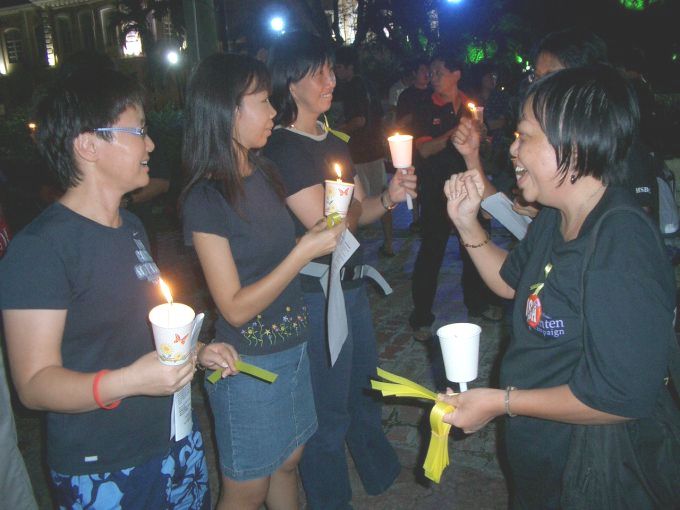 your house window, gate, bike, anywhere, where it can be seen in public. this is to show solidarity that we are behind the detainees and hope for their freedom soon. you can see from the picture here, me giving the ribbons to some of those people present at the vigil. see how happy i was? 🙂  oh, i was wearing the ‘mansuhkan ISA’ badge AND a yellow ribbon – the small one meant for wearing.

this time i had my colleague took photos for me, with my digicam. being a ‘camera trigger happy’ person that he is, he took as many as 66 photos! well i was busy walking around distributing ribbons so i had no time to take photos. anyway, good thing that he took the photos since he is a better photographer than me. only about 10 of his photos didn’t turned out right (compare to me, that day i took 40 photos, 30 did not turned out right!).

i reached home near midnight last night as i was helping the GMI members (organiser of the vigil) taking care of the petition and finally ‘stamping’ the hari raya cards to be sent to the ISA detainees. for now i’ll put up only 4 photos. later on, i will upload all the photos to my online photo album.

this picture shows part of the crowd. in the foreground, with beard, is one of our most out-spoken priest, fr. fabian, who was the one who presided over the candlelight mass in the cathedral (you can see his picture in anil netto’s blog too). 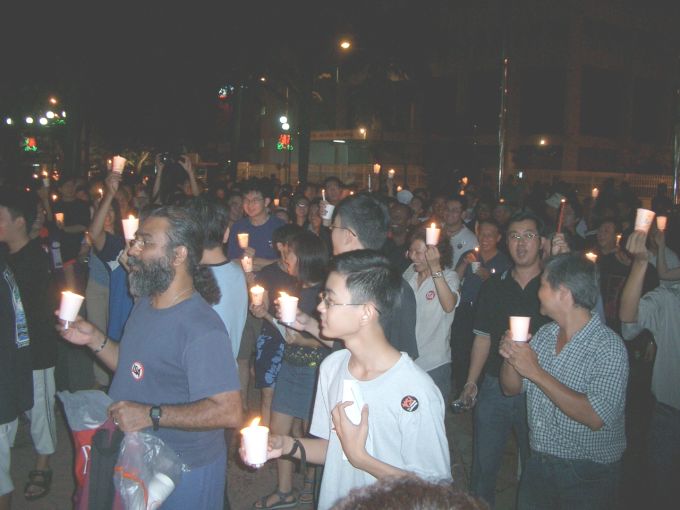 the following photo shows the people on ‘a march’. the organiser wanted the crowd to march to the dewan’s entrance and back but the police did not permit that so they just walked round the big ‘flower pot’, all the time shouting ‘mansuh! mansuh! mansuhkan ISA’ and ‘hidup rakyat! hidup rakyat!’. one elderly lady was so bold… amidst all the ‘mansuh! mansuh!’ shout, she suddenly shouted ‘mampus abdullah!’. 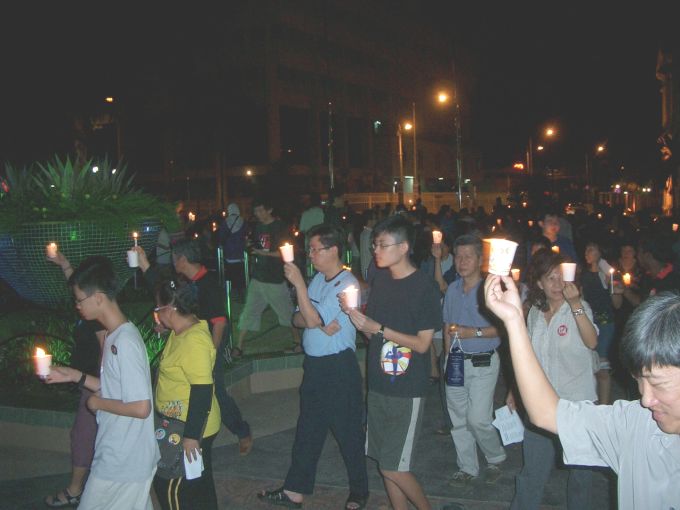 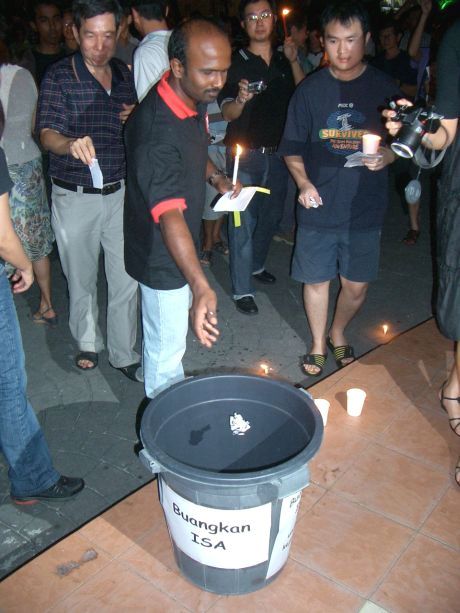