You are here: Home › malaysia › the vigil at the esplanade 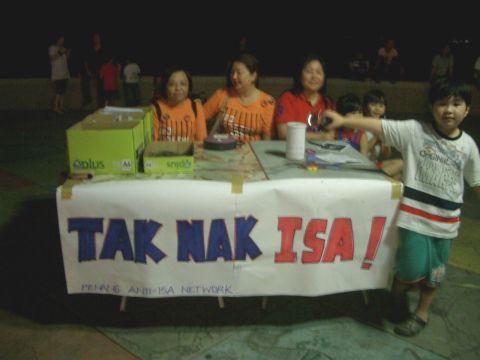 we, the organisers of the anti ISA vigil in penang on 15 nov. at the esplanade were at the esplanade early to set up thing. we brought along tables for sale of t-shirts and as ‘secretariat’ where a registration book is availble and to put our candles and the flyers. yes, we prepared booklets with lyrics of songs, names of all the ISA detainees, and some short info on ISA.

before the vigil began, i met angela ooi (again – 1st time met her at the PJ vigil), the one who initiated the seremban vigil and also met jong (again – 1st time met her during the permatang pauh by-election), the one who initiated the ipoh vigil. how wonderful! the two leaders of the two states came all the way to be with us. thank you, angela, thank you, jong. thanks for your support.

the vigil started off punctual at 8.00pm. no dilly dallying for us. paula, the MC started off by giving a short background of ISA. the first speaker for the day was bukit mertajam MP, YB chong eng. sorry, as one of the organisers,  i was busy running around so didn’t quite get what she said.

when chong eng finished her speech, paula continued with the background info on ISA. then richard, one of the organiser, came up to lead the people in a chant which goes:
leader: mansuh mansuh
all: manshuhkan ISA
leader: bebas bebas
all: bebas tahanan

after the chanting, the first song of the evening, ‘you raised me up’ followed. everybody get to join in the song since there was the booklet for them to refer. paula played the guitar and sang, accompanied by howie, another organiser.

following the song, came the second speaker, a PAS member. originally it was suppose to be mujahid yusof rawa, MP for parit buntar but he couldn’t make it and a rep. replace him instead. his speech was followed by the song ‘bridge over troubled water’ ‘blowing in the wind’. then it was the turn of the third and last speaker, gary nair from PRM.

couldn’t quite remember but think it was at the point of during the middle of the PAS member’s speech, that about 5, 6 policeman came and stood behind the ‘secretariat table’.

when gary finished his speech, paula explained briefly why we are holding a candlelight vigil. before that, during gary’s speech, a few of us had started to hand over candles (complete with paper cups) to all the people present.

the second chanting took place after all had lit their candles.
leader: ISA must go!
all: ISA must go!
leader: go go go GO!
leader: say no to ISA!
all: say not to ISA
leader: no no no NO!

the last song sung was ‘sing a song of freedom’. both paula and howie get the crowd joining in enthusiastically especially in the chorus part.

the crowd were told this was the last song, and also the end of our vigil. while only a handful started to leave, many remained. at that time, suddenly we see 5 ‘clowns with red helmets’ arriving! (description from margeemar)… or to me ‘favourite models’ (explained why later). it was quite a shock to many of us since, our vigil is peaceful and further, it had ended already! that time, a police officer with a loud hailer asked the crowd to disperse (giving us 10 mins).

when the riot police arrived, everyone rushed to take their photos. see, that’s why i said they were the favourite models. haha. i did notice at other vigils or demo too, people like to take photos of the riot police.

when we arrived at the police station, it was 9.30pm. we were not allowed to enter the room of course (paula was at the 2nd floor) but to stay on ground floor outside the main entrance. it seemed that later on, others who had wanted to come in, were not allowed in. luckily we got in fast.

3 young men from the chinese press and athi, the malaysiakini journalist were inside the police station too.

paula was allowed to use her handphone, so we sms her some words of encouragement. first thing i sms to her was to let her know we were there at the police station. we also sms her some word of advice regarding police questioning. somebody called DAP MP liew chin toong, and he came about 11.00pm and got to go to where paula was. later on, jeff ooi also turned up briefly. later on when ong got to go to where paula was, he update us via sms what’s happening with paula.

we were very relieved when at 1.10am, we saw paula, together with her husband, liew chin toong and ong walking towards us. phew! at last she had been released! she had been questioned for 3 1/2 hours!

all of us did not have our dinner yet so we went across the police station for some food while listening to paula’s account of her time spent with the police questioning her. she looked tired and drained but she still can maintain some cheerfullness. she’s a strong lady!

NOTE:  oops. it’s too late for me to post photos up now.i’ve got several other photos to show (amateurish types – wonder why the flash in my digicam stop working).  i’ll do it tomorrow, so do come back and have a look, ok. btw, the photo right at the top shows me (far left) at the table where RPK t-shirts were sold and our things were placed.

UPDATED:  ok! managed to post the photos during my office lunch time. today no go out lah… just eat bread and butter inside office.

paula, the emce for the day. 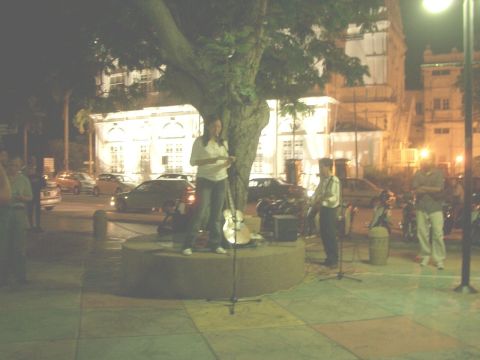 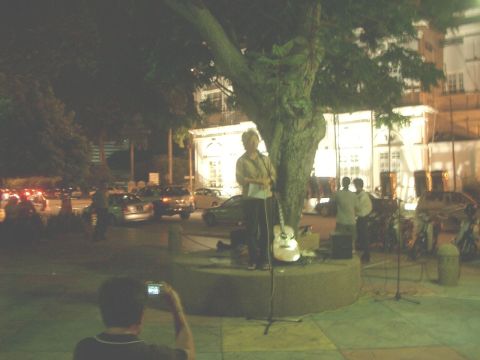 the crowd before the lighting of candles. 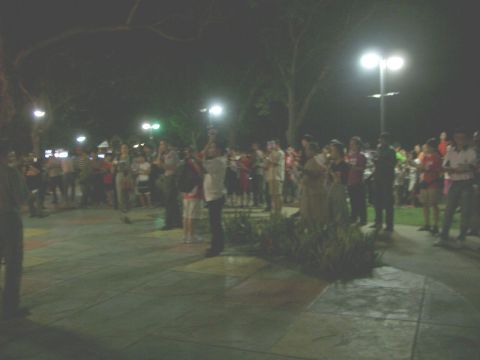 the crowd with lighted candles. 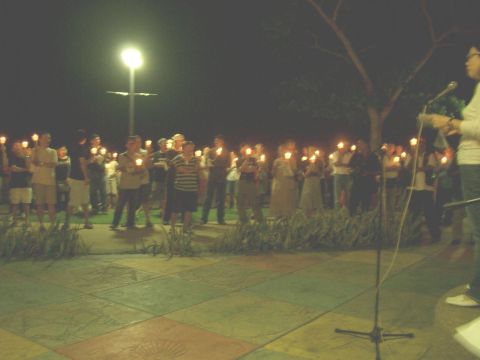 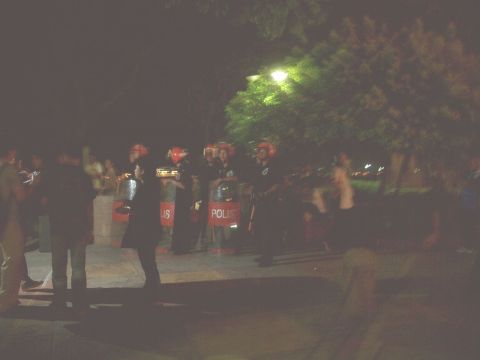 we have these red-helmet men gracing our vigil. 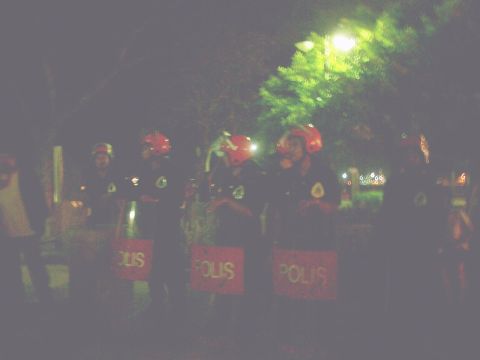 5 Responses to "the vigil at the esplanade"