You are here: Home › announcement › abolish ISA candlelight vigil in 8 states on 1 aug. 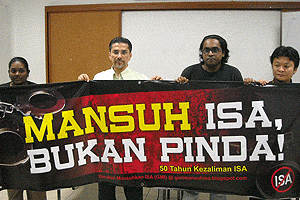 reference to my earlier post ‘abolish ISA! no need to amend!’ (the banner on the picture left said that – in bahasa), here are the updated announcement of 8 states confirmed to hold the vigil simultaneously on sunday. 1 august.

don’t forget to go and attend if you are in any of the above towns, ok? this year marks the 50th anniversary of ISA existence. the ISA was formed in 1960 during the first prime minister (tunku abdul rahman) time. 50 years ago, mind you. so you can imagine how out-dated it should be, especially when as years went by, it became so draconian.

We demand the Government of Malaysia to Abolish the ISA as soon as possible as the barbaric and unlawful Act has existed in Malaysia for 50 years. The ISA is draconian and most importantly, it is against fundamental human rights.

Please join us together to fight the ISA and all other detention without trial laws! Together We CAN Bring CHANGE!

rightly so! together if we speak up against the draconian act again and again, we hope to bring change one day.  come for the candlelight vigil to show your support. don’t be like someone who, on seeing me wearing the anti ISA badge,  said to me “aiya. the ISA ah. let the politicians fight over it. why do you want to fight?” i should have answer him the politicians will fight for their own pockets only. haha. anyway, frankly, of course there are  several politicians who are against ISA too but we can’t leave everything to the politicians.  to get things moving, usually it depends on people’s power, don’t you agree??  so come one, come all, to join in the protest on 1 aug.  penangites, don’t worry about the police or SB – we have the speakers square where the public is allowed to speak all they want without fear of harassment from the police (hopefully!).

The Abolish ISA Movement (GMI) and rights group Suaram aim to hold simultaneous candlelight vigils against the abhorred law in eight states around the country on Sunday.

The protest will be held as an effort to pressure Prime Minister Najib Abdul Razak and Home Minister Hishammuddin Hussein to repeal the Internal Security Act.

Aug 1 marks the 50th anniversary of the draconian act, which was introduced by first prime minister Tunku Abdul Rahman’s administration in 1960.

The candlelight vigils will be held at the following venues and times:

On Monday, GMI chairperson Syed Ibrahim Syed Noh announced that the coalition of NGOs would distribute around 100,000 leaflets on the draconian law on the same day.

GMI also plans to erect billboards and put up banners on the ISA in Selangor, he added. 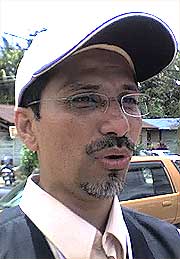 Syed Ibrahim (picture) called on the government to abolish all existing detention-without-trial laws such as the ISA, Emergency Ordinance 1969, Restricted Residence Act 1933 and Dangerous Drugs Act 1952 with immediate effect.

In his maiden speech as prime minister, Najib had said his administration would not use the ISA arbitrarily and would give importance to the principles of human rights and civil liberties.

The government is planning to table amendments to the ISA in the areas of length of detention, rights and treatment of detainees and their families, the power of the home minister, the use of ISA for political reasons and detention without trial.