You are here: Home › announcement › abolish ISA! no need to amend!

UPDATED: just saw in malaysiakini, that this anti isa protest will be nationwide. click on ‘read more’ to read about it. 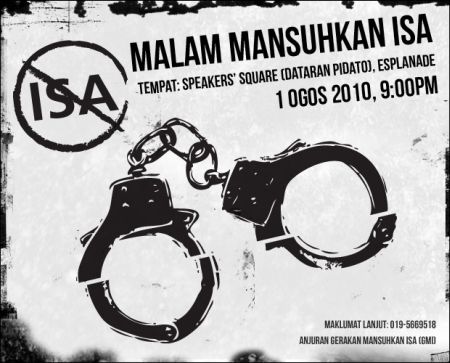 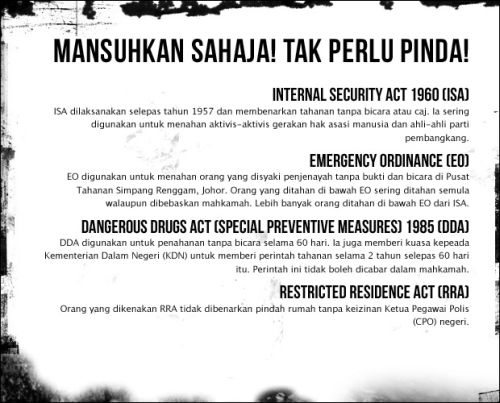 The Abolish ISA Movement (GMI) will be holding a simultaneous candlelight vigil, commemorating the 50th anniversary of the oppressive Internal Security Act 1960 by calling for its abolition.

In a continuous effort to reach out to the grassroots, the vigil will be held on Aug 1 in all the state capitals nationwide.

“There will not be any aggressive moves on the part of GMI (left) this year as we are trying to create more awareness among the people.

“The Abolish ISArally held on Aug 1 last year created a great impact. This time around, we want it to be more effective with the impact lasting for more than a year,” said GMI chairperson Syed Ibrahim Syed Noh in a press conference in Kuala Lumpur today.He said that around 100,000 leaflets giving information on the draconian law will be distributed nationwide on the same day. “We will also approach Selangor Menteri Besar Khalid Ibrahim to seek permission to put up billboards and banners on the ISA,” he added. Stating that no amount of amendments to the draconian law is going to make the legislation any less repressive, Syed Ibrahim asked the government to abolish all existing unjust laws such as ISA, Emergency Ordinance 1969, Restricted Residence Act 1933 and Dangerous Drugs Act 1952 with immediate effect. “All these laws go against the spirit of the federal constitution, as well as contravene Articles 9, 10 and 11 of the Universal Declaration of Human Rights (1981),” he added. ‘Charge detainees or free them’Among others, GMI also asked that all the detainees who are being held without trial be released or charged in an open court, and urged the government to close down all the detention centres.

“The government should respect and restore the proper powers of the judiciary as an independent body, and repeal all laws which have removed such judicial oversight,” he added.

Suaram’s 2009 Human Rights Report which was released on July 21 also revealed that Prime Minister Najib Abdul Razak’s first year in office marked further deterioration in the state of human rights in the nation.Earlier, in his maiden speech as prime minister, Najib had said his administration would not use ISA arbitrarily but would give importance to the principles of human rights and civil liberties. Home Minister Hishammuddin Hussein had also stated that ISA amendments will revolve around five areas – the length of detention, rights and treatment of detainees and their families, the power of the home minister, and the use of ISA for political reasons and detention without trial. However, at present, a total of 16 people are still being detained under ISA, with the longest-standing detainee being held for more than eight years for allegedly being a Jemaah Islamiah member.

note:  read also press statement from the bar council regarding this matter.

3 Responses to "abolish ISA! no need to amend!"