whoaaa!! listen to the people, mr PM! the writings were there – stark and clear! the rakyat are angry! 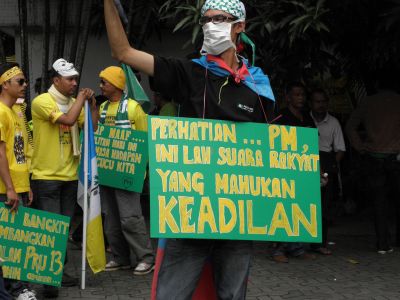 the sign above read: take note PM. this is the voice of those who wants justice. 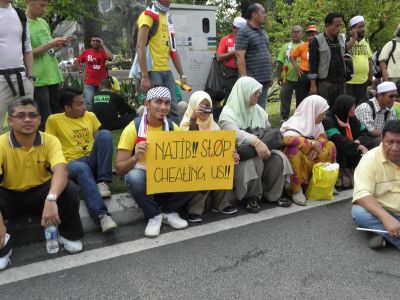 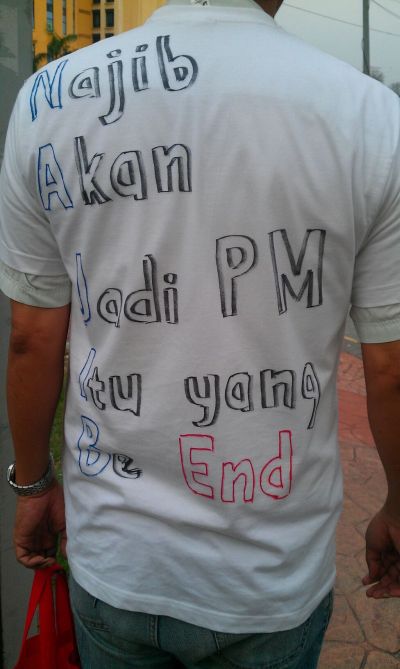 the words on the t-shirt above read: najib will be the PM of BE END (BN)

above are only a few photos i took from the historic KL112 (12 jan. 2012), organised by PR, held at stadium negara. such a historic, exciting day, which for sure, i'll have to blog about it.

the rest of my photos are up on my facebook album.

i went with a group of people in a bus organised by suaram. the bus was sponsored by one YB. hui fei, suaram penang coordinator came to fetch me from house at 5.40am to shell green lane, the meeting point where the bus will depart. the bus was full! i was quite surprised to see quite a number of old people! very good!

we reached KL about 11.30am. bus dropped us near puduraya.  i followed hui fei and a few of her friends, walk to masjid negeri, one of the meeting points. (there were 7 meeting points, led by different leaders – to march to the stadium). hui fei said that they decided to go to masjid negeri to join the malay crowd.

since the people there wanted to have their zohor prayers first before the march, we started marching i think near 2.00pm (or maybe even over 2.00pm). that was why when we reach the stadium, it was full already and we could not enter. what a pity for me…. but never mind, outside the stadium (the vicinity) there were many people too and i hang around at first in front of the chinese temple, then later walked to the lane just next to the stadium.

oh yeah from pudu to masjid, i was with hui fei and friends but when the march started i told hui fei that i'll have to seperate from them since i had to stop now and then to take photos. so right from the march at the masjid i was already alone. never mind, i'm used to being alone… and i like it – more freedom for me to go anywhere or do anything – no need i wait for you, you wait for me or dilly dally to wait up for somebody.

although the sun was not really that bright, but it was very hot anyway. i perspire tons of sweat till my mini towel became soaking wet!! at one stage it drizzled but luckily stoped after a while. thank god anyway for the drizzle as at least it cool down the air a little.

i guess in the first place if i did not join hui fei and friends to walk to masjid negeri but stay put near where the bus dropped us, i would have get to enter the stadium. i missed so much interesting happenings inside the stadium… but as i said never mind, as interesting things happened outside too!

since i was not inside the stadium, i decided to leave after 4.00pm (and not after 5.00pm, the time the rally was suppose to end). took monorial to KL sentral and from there took LRT to taman jaya to meet sharon, my KL friend, whose house i stayed at.

oh ya this reminds me, i have to lug along my luggage during the march and when i walked up and down 'hanging around' outside the stadium. no wonder i feel tired… and my feel was killing me, not only with all the walking and standing but it was also a relatively new shoe which 'cut' into my toes!

see, below, is my photo taken when i was at taman jaya A&W restaurant (after leaving the rally). dead tired…. but nevertheless happy! happy to be part of a historic occasion! 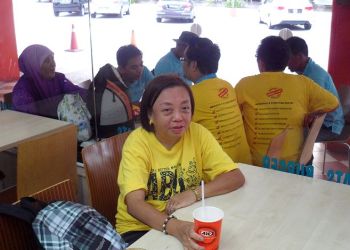 i'm glad (and mighty proud) that i was at the people's uprising rally – together with thousands and thousands of people to call for a CHANGE! a change of government as enough is enough or more than 50 years.

oh yeah there were also 112 rally in other states and countries. that's right, malaysians overseas, in solidarity with us, held this 112 uprising rally from where they were too. like in london and egypt.

please don't forget to visit my facebook page for more photos taken by myself.

UPDATED LINKS OF SOME STORIES,  PHOTOS AND VIDEOS
(will be constantly updated)

uncut from stadium merdeka (DPP m'sia) – this one show part of anwar's speech, which i like as he ask some Qs and people answered with 'umno!!". also show some of the leaders at the podium.

people talk during the march

rally leaders take to the podium

those little moments during the himpunan