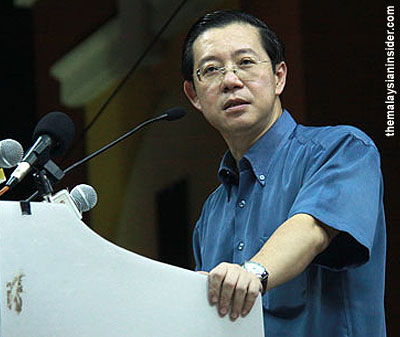 … regarding the stupid DPM's idiotic comments on lim guan eng's denial of his son's sexual harassment. how on earth can such a person be DPM? oh sorry, of course he can since he is in umno. figures.

his denial not enough? then what happened to the many denials you made, as one malaysian insider reader pointed outt? what happened to our PM's denial that he does not know the late altantuya? shouldn't you push for the police to investigate if our PM knows altantuya?

DAP's tony pua rightly said that the DPM need to have his examined (and to think he became the DPM):

“The deputy prime minister needs to have his head seriously inspected. The onus to prove the scurrilous allegations are on the accusers, and not those unjustly maligned.

also, the alleged victim had already spoken up that she had never been in malaysia for the last 7 years and the principal of the school had also spoken up the alleged victim is not in the school and the reason for LGE's son's transfer. of course, naturally, we know without any surprise, utusan will jump up to parrot the DPM. *SIGH* the sheer hypocrisy and double standard of umno. umno, oh umno, oh umno… the more you manifest your double standard, the more we will be ever so willing to kick you out during the coming election.

ok i'd better not talk more or i'll get angry. here's the statement from LGE:

How Can Tan Sri Muhyiddin Yassin Be So Cruel As To Continue To Repeat The Lies By UMNO Blogs Against My 16 Year Old Son And Question Whether My Son Is Innocent Of Lies Of Sexual Misconduct When The Lady “Victim” Had Asserted That She Had Not Even Met Me Or My Son And The Penang Education Director Had Declared The Allegations Were Not True.

I am appalled and disgusted by Deputy Prime Minister Tan Sri Muhyiddin Yassin’s remarks that my mere denial of sexual harassment claims against my 16-year old son was inadequate. Instead, Muhyiddin says that “if the Penang chief minister thinks it is important to correct the information, then he has to come up with a strong statement.”

What more strong statement is required from me when I had condemned these barbaric lies as totally unacceptable, inhumane; and the UMNO and BN leaders involved as ferociaous beasts preying on the innocence of young children. Umno bloggers had printed pictures of my son and the alleged victim whom they claimed my son had outraged her modesty. They had claimed that my son tried to escape punishment by using my name and I had paid the girl’s family off with RM200,000 to hush up the matter.

The photograph of the purported “victim” used by Umno bloggers was that of 21-year-old chess grandmaster Anya Sun Corke who is studying at Wellesley College in the United States Anya had already issued a statement denying the charge and expressed sympathy for my son for being a victim of such vicious and barbaric lies.

As a result of PR Penang government’s solid performance in clean and effective governance for the people, UMNO bloggers has been trying to finish me off politically with lies and politics of hate. When they failed, they now train their guns on my innocent school-going son.

Amongst some UMNO leaders who highligted this shameful episode in the blogs is Bukit Gelugor(Penang) UMNO Division vice-chairman Dr Novandri Hasan Basri. He was then followed by many UMNO leaders rehashing the lies. Sadly even UMNO Youth chief Khairy Jamaludin joined in these shameful lies by poking fun at my son with this tweet:-

Even though the alleged victim had come out with a statement denying the lies, there is no remorse or apology as yet from Khairy or UMNO leaders to my son. Instead of condemning Khairy or Dr Novandri for practicing “the lowest of  gutter politics”, Muhyiddin has seen fit to question my denials and that I should not blame others for the allegations.

How can Tan Sri Muhyiddin Yassin be so cruel as to continue to repeat the lies by UMNO blogs against my 16 year old son and question whether my son is innocent of lies of sexual misconduct when the lady “victim” had asserted that she had not even met me or my son and the Penang Education Director had declared the allegations were not true?

Penang Education Director Ahmad Tarmizi Kamaruddin had told the Star on 22.10.2011 that his department found no evidence to back the claims of sexual misconduct against my son in several blogs. Ahmad said that it was wrong to drag a student into any controversy to gain poltical mileage. “Children should be left out of politics,” Ahmad added.

If Muhyiddin wants to be seen as fit for the post of Prime Minister, he must be moral and ethical. He fails this moral and ethical test by picking on a 16-year old son who is still schooling and has no chance of defending himself. If Muhyiddin hates me so much, he can do his worst to finish me off politically. But Muhyiddin should not join the craven pack of cowards to pick on my 16-year old son and put my son again through this traumatic experience.

Muhyiddin loses the respect of decent Malaysians if he behaves in the same arrogant manner as those ferocious UMNO beasts who know only how to bully my 16-year old son and feast on a child’s innocence.