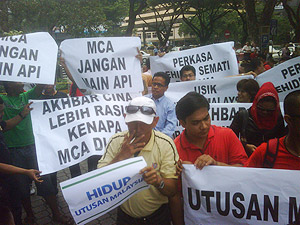 so of course then the equation is that DPM is racist too, which will equal to the umno govt being racist.

i find it strange… yet amusing… yet anger, when i see these two heading side by side in malaysiakini.

remember the govt and umno had denied they have anything to do with perkasa, though we all know, as lim kit siang rightly puts it, perkasa is extremist proxy for umno.  well, here is one of the proof. at the same time while perkasa back up utusan, the DPM too back up utusan!

i’m too tired to go through both the articles to single out what they said and comment. so very fed up already!! only want to say these few words….

– the DPM siding with utusan though it’s so obvious utusan is so racist. of course. utusan is umno owned.

– perkasa gathering outside the MCA HQ, do they have police permit? why police allowed their gathering, while hindraf, bersih, anti ISA gathering, police always stop them.

– hate it so much when they (perkasa) like to say ‘don’t challenge islam/the malays’.

– at the gathering, perkasa issued threat… and yet nothing was done to them.

Around 50 members of the right wing NGO Perkasa today protested in front of MCA’s headquarters in Kuala Lumpur over the party’s call for a boycott of Umno-linked daily Utusan Malaysia.

Upholding the daily as the defender of the Malays, Perkasa secretary Syed Hassan Syed Ali said their protest was organised to counter MCA, which Perkasa accused of breaching Malay sensitivities.

“MCA has not stopped demanding… if they persist, they will get what’s coming,” warned Syed Hassan.

“If they touch on Malay sensitivities, we will not support them any more,” he told reporters after the brief 10-minute protest.

Prior to the display, the group had handed MCA’s top leadership a “four point warning”, which they did not disclose to the media.

Last week MCA called for a boycott of Utusan for publishing a call for a ‘1Melayu, 1Bumi’ movement, that the Chinese party argued was legitimising racial discrimination.

The pro-government daily was responding to DAP’s overwhelming reception during the recent Sarawak election, particularly in the state’s Chinese-majority urban centres.

In response to MCA’s call, Perkasa had called the BN component party “desperate” in its attempt to regain lost Chinese support.

Perkasa also wants the Chinese and Indians to view its struggle in defending the rights of the Malays from a positive angle.

photo burnt by perkasa members 2According to Bernama, Kedah Perkasa president Syed Osman Mansor said today Perkasa would defend the rights of the Malays in accordance with the law and there was nothing secret about its struggle.

“The Malays have become disunited because of politics. Nevertheless, a rise in their unity was seen through two huge gatherings (organised by Perkasa) in Pasir Mas, Kelantan, and Pasir Salak, Perak, this year.

“Kedah Perkasa will organise the third gathering at the Sultan Abdul Halim Stadium in Alor Setar on Friday and Saturday,” he told reporters.

Syed Osman said more than 30,000 people were expected at the gathering.

He said Perkasa would launch the ‘1Melayu, 1Bumi’ campaign on Saturday to openly demand Malay rights.

Deputy Prime Minister Muyhiddin Yassin today defended Utusan Malaysia as a Malay voice and said it was improper of the MCA to boycott the Umno-owned Malay daily.

He said Utusan has been the voice of the Malays and Malaysians in conveying the people’s views on various issues.

This, said Muhyiddin, who is also Umno deputy president, was never meant to damage national unity.

“We have to remain rational. I don’t know why MCA wants to do this, as I was not in Malaysia then.

“Is it because MCA is worried that what was reported in Utusan can spark a riot?” Muhyiddin said, adding that Utusan only reported what the Malays felt.

He was responding to MCA’s call to the people to boycott the Malay daily for calling for a ‘1Melayu, 1Bumi’ movement instead of Prime Minister Najib Abdul Razak’s 1Malaysia campaign.

Muyhiddin told reporters after launching the Kuala Lumpur international book fair that it was improper of the MCA to call for the boycott of Utusan.

“I don’t think it is proper for us to call for people not to read Utusan. What is it so afraid of?” Muhyiddin asked.

He added that Utusan and other media have the right to report what they wanted to report, but the media could not break certain limits.

“I’m sure other media also have their pro and cons, but we can’t stop certain media like Utusan from reporting what it wants to report

“But there are limits. The first thing is the law, the second thing is (you) cannot touch on the issues that can be deemed as racial and sensitive, ” Muhyiddin said.

The calls to boycott Utusan, he said would not succeed and the Malay daily would continue with its reporting job.

“To read the paper or not is an individual decision, if you want to (boycott), do lah, but it will not be effective at all.

“The more you ask people to boycott, the more people will want to read, so why? Are you afraid of this?” he asked.

However, Muhyiddin skirted the question whether he supported the ‘1Melayu, 1Bumi’ movement.

The calls for ‘1Melayu, 1Bumi’ movement, he said, were a natural response after certain parties saw the voting trend in Sarawak state election, where most of the Chinese voted for opposition.

“To me, it is a feeling of worry and a reaction to the latest political trend, which brings the Chinese out of mainstream politics.”

He also warned the Chinese dailies not to manipulate his statement, or they would have to face the music.

Utusan assistant editor-in-chief Zaini Hassan, in his ‘Cuit’ column on April 20, said the DAP had managed to unite the Chinese politically and, in his opinion, the Malays should launch the “1Melayu, 1Bumi” unity movement.

Last Friday, Prime Minister Najib Abdul Razak said the government had nothing to do with the ‘1Melayu, 1Bumi’ movement proposed by Utusan.

LKS: Voice of Malays, or of Muhyiddin?

Adding to the debate today, DAP supremo Lim Kit Siang rubbished Muhyiddin’s claim of Utusan as being the representative of Malaysians.

It doesn’t even qualify to be the voice of the Malays, said the Ipoh Timor parliamentarian, citing the ‘nose-dive’ in circulation suffered by the daily from 350,000 in 2009 to less than that half the amount in the following year.

If it was representative of anybody, Lim suggested further, it was of the communal views held by Muhyiddin that stand in contrast to Najib’s ostensibly inclusive concept of 1Malaysia.

“How can Muhyiddin give endorsement to Utusan Malaysia’s call for ‘1Melayu, 1Bumi’ when it is clearly an open affront and repudiation of Najib’s 1Malaysia signature policy?