You are here: Home › CnP › ex PM, mahathir, should be charged under the sedition act 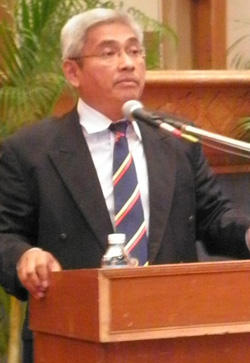 but wait…! he’s not you and me. he’s not from the opposition.  so you’d better dream on if you want to see him being charged.

prof. abdul aziz was commenting on article 152, which  guarantees the status of chinese and tamil schools while recognising bahasa melayu as the official language. mahathir, had in his blog entry titled semenanjung tanah melayu 2″,  called for all malaysians to be “speaking and teaching in one national language” and practising one national culture. “mahathir can be arrested and charged under the sedition act because he questioned the status of vernacular schools, which are guaranteed by article 152,” abdul aziz said.

prof abdul aziz also confirmed to us that the extremist, racist group, perkasa (‘extremist’ and ‘racist’ are my own words, not prof abdul) is all the time only acting like monkeys jumping up and down making lots of noises (again my own words) regarding malay special privileges.  he pointed out that the federal constitution already recognised the special privileges, the this part of the constitution cannot be amended at all without the consent of the rulers.

yes, we are not stupid (unlike them!). we know the special privileges are enshrined in the constitution and that particular act can’t be amended just like that. so of course we wouldn’t dare to question these special rights they are privileged to have.  however each time, we so much as bring up something to do with how the malays and non malays are treated, perkasa will come out with their ‘stop questioning our special rights!” cry. well, what else can they respond with, with their minute minds?

special rights… special privileges… whatever, the word ‘special is there. have you heard of ‘special child’? what does a special child means? a retarded child. well…. perkasa (and many other umnoputera) holding on to their special title… what does that means???

Malay rightwing group Perkasa is “illogical” in playing up the issue of Malay privileges because the federal constitution guarantees their rights, which cannot be amended without the consent of the rulers.In saying this, International Islamic University of Malaysia law professor Abdul Aziz Bari also criticised former prime minister Dr Mahathir Mohamad for violating the sedition law by questioning the status of vernacular schools.

“The constitution stipulates that only certain articles can be amended with the consent of the Rulers’ Council, including articles 152 and 153, which touch on Bahasa Melayu and Malay rights.“These articles cannot be amended, even with 100 percent support from Parliament.“Hence, to me,the demand by Perkasa is illogical because the constitution protects Malay rights and the Malay language,” Abdul Aziz said at a discourse on “Federalism: Justice in distrubuting national wealth”,organised by the office of the Selangor state economic adviser. He said article 152 guarantees the status of Chinese and Tamil schools while recognising Bahasa Melayu as the official language.Hence, he said, Mahathir could be charged under the Sedition Act for his blog entry questioning the status of vernacular schools.In his blog entry titled “Semenanjung Tanah Melayu 2”, the former prime minister called for all Malaysians to be “speaking and teaching in one national language” and practising one national culture. “Mahathir can be arrested and charged under the Sedition Act because he questioned the status of vernacular schools, which are guaranteed by article 152,” Abdul Aziz said.He added that the relevant articles were vital in ensuring that racial and religious issues were not played up by politicians and made controversial.Anwar cries foul on ‘discrimination’Meanwhile, opposition leader Anwar Ibrahim, who spoke in his capacity as economic adviser to the Selangor government, said the four states ruled by the Pakatan Rakyat coalition were discriminated against by the federal government in terms of allocations.At a press conference after the discourse with state civil servants, Anwar said although Selangor taxpayers pay RM16 billion in taxes to federal government every year, yet the state only got back RM400 million in grants, which was a mere 2.9 percent of what was paid to the federal government.The sum is “too small, and not rational,” he added.

“The powers of the state, which are guaranteed by the constitution, have been eroded, not only in Sabah and Sarawak, but also in the states ruled by Pakatan.”Anwar also said federal grants given to the former Selangor government were a lot more compared with what was now given to the state under PKR Mentri Besar Khalid Ibrahim.According to the PKR de facto leader, the Penang government also faced the same problem.He said he understood that the government needed to help the poorer states by using taxes collected in the richer states, but the ratio of 2.9 percent for Selangor was not reasonable.Anwar called on the federal government to set up a mechanism to manage allocations to the states in order to distribute the resources reasonably.