You are here: Home › islam › here comes the jihad army! 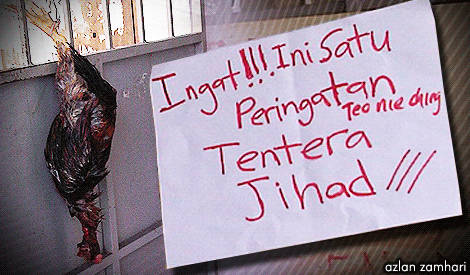 the sign says it all. sign is in malay. translated:
Take note! This is a reminder Teo Nie Ching, the Jihad Army.

whoa! nice. malaysia now has a jihad army. what next? suicide killers?

from the note here (and the chicken dripping blood), it sounds like whoever did this was very proud when they signed off as the jihad army. what is jihad? jihad means holy war. what is so holy about cowardly leaving a note and dead chicken at the doorstep of a young lady and threatening her? rightly so, selangor executive council member, halimah, said they had misused the term jihad.

“They are committing an offence against the Prophet Muhammad (PBUH) and against Allah,” said Halimah at the weekly post-exco meeting press conference at the state secretariat today.She contended that a real Muslim who understands the real meaning of jihad would not have done such a thing.“That is not the way to perform jihad. A good Muslim, when angry will be rational and controlled, not react in this way,” she stressed.She cautioned Muslims who do not truly understand jihad, which is the Islamic term for holy war, to be careful in using the word.

well, to these extremist muslim, jihad to them is  “don’t mess with islam!” or fighting for ketuanan melayu/islam! (malay/islam superiority).

yes they had misused the term jihad, yes they are giving islam a bad image by their action… just like those muslim who protest after friday PRAYERS… and also like the king SAMPah mamak, abduh ghani, of penang who keep on saying what he did is ‘demi bangsa dan agama’ (in the name of race and religion). great! you guys are doing a pretty good job of distorting the image of islam… and yet you blame us nons.