You are here: Home › Double standard › these muslim NGO are insulting their own religion

UPDATED with lots of pictures, courtesy of malaysiakini. please click on ‘read more’ to see the pictures.

because they protested after friday prayers. after praying, they become violent and abusive? what for go and pray then?

i’m referring to the protest at penang yesterday afternoon.

here are my comments at malaysiakini:

“stupid people! yes they themselves insult their own religion when they protest after friday prayers. as i had said, and some commenters here too said, how can they after prayer, go and shout and scold people? what for pray then?? hypocrites! the police only gave permit for them to hold the protest in the mosque but they decided to walk to komtar… and the police allowed them! the police should stop them from walking to komtar. then they protest at komtar – a public place – the police should stop them too but oh no, the police couldn’t bother to stop them. what does that tell you????? i always laughed when i heard the malays shouting ‘hidup melayu’. as if melayu going to die off?? and i also laughed when they claim they are tuan di tanah ini. pigilah! balik indonesia, balik sri lanka, or wherever – you are all pendatang just like non melayu are.”

i also commented on the malaysian insider (but my comments now showing yet)… on the part where most people commented:

“Police and FRU officers, who were on the scene to manage the crowd, at one point attempted to prevent the group from continuing their march towards Komtar but were unsuccessful.”

this is so laughable, so stupid, so unbelievable!!! police and FRU can’t stop them??? oh really, tell that to a 5 years old kid!

i understand from malaysiakini, it was mentioned they had a police permit for the protest. ok fine, but i’m sure the permit is for them to protest within the mosque compound only. then they decided to march to komtar… and whey they did, the police should stop them at once!! if they refused to stop marching, then arrest them lah! simple as that! that was what the police did to the hindraf protestors! when they wanted to march, police warned them not to, but they still marched, then the FRU came down hard on them and arrested them! so shouldn’t this be happening to these muslim NGO people who refused to listen to the police to stop marching?? and oh they then protest at komtar, which is a public place – why were they not stop?? really!! so OBVIOUST BLATANT DOUBLE STANDARD!!!!  2MALAYSIA at work!!

oh don’t forget. what they screamed and what was on their banners were seditious too… but yet nothing was done on them.

ok i gotta go for my beauty sleep now. wanted to post this earlier with lots of photos from malaysiakini but the damn streamyx line was down for hours! only managed to get it after 2.00am!! come back tomorrow, and i’ll post up the pictures to show you… esp. for those who do not subscribe to malaysiakini. there are so many pictures in the chinese section.

KURANG AJAR MUSLIM WHO BEHAVED SUCH AFTER PRAYING….

stomping on and burning of a chief minister’s effigy! 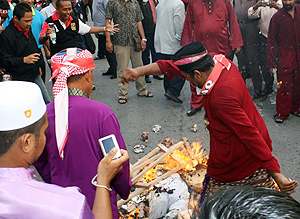 aduh! ini macam pun boleh kah? sembahyang buat apa?
well, even if ok, some or most of these people did not go pray in the mosque but just joined in the protest, still it tells something of their religion, esp. when they like to say they were doing all these in the name of their religion!! 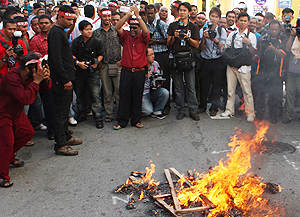 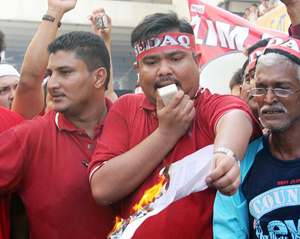 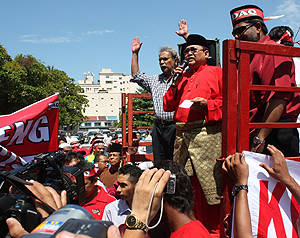 the fat one in the centre is this person – katak ibrahim! he came all the way from kelantan! rizal faris, president of the  penang malay chamber of commerce (but katak ibrahim ali was there too). 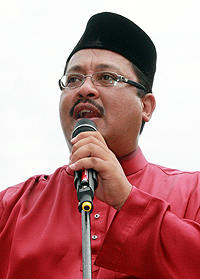 they mocked my chief minister… see the picture of him… but for that never mind. the CM will take it all in his stride. he won’t get provoked and retaliate nonsense like these muslim NGOs did. but what’s worst… hey look at the words… “do not test our patience. malays are the lord of this land.” 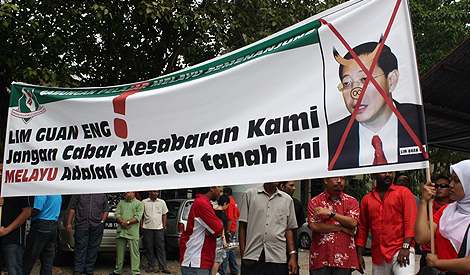 and here it is again… the same words PLUS (top) – “we are willing to die defending malays and islam”. whoa!! such heroes eh!! who appointed them to defend malays and islam? does islam need defending? 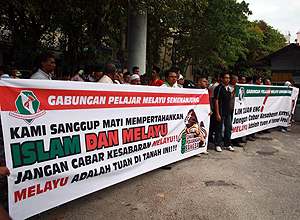 and this… wonder where did they get the statistics. how come they never put up the figures that 75% malays get tenders during PR rule? 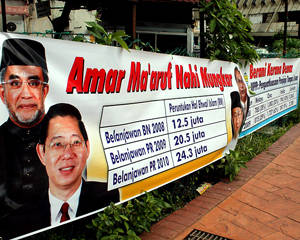 LGE is a dictator and racist? obviously influenced by bayan baru MP, zahrain. 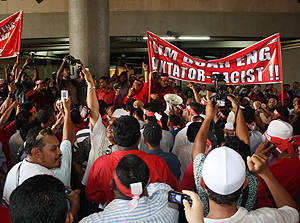 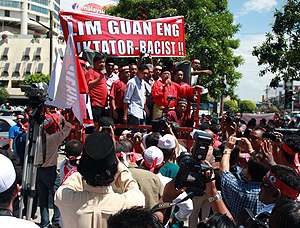 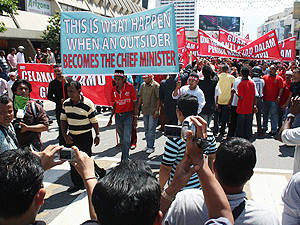 whoa!! so aggressive! so SAMENG and BIADAP and KURANG AJAR! 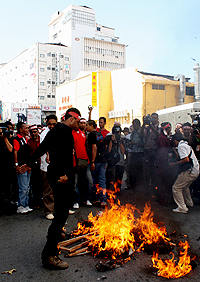 One Response to "these muslim NGO are insulting their own religion"