You are here: Home › general › the PM swears again that he does not know altantuya

“They’ve not offered any evidence at all … I have sworn in the name of God, of Allah, that I had nothing to do with her and I can’t go beyond that.”  (from the malaysian insider)

oh really? is it that easy to escape from some wrongful/illegal misdeeds? just swear to god? the prisons will be very empty if everybody are like you! a robber who is accused of stealing thousands from a bank can simply swear to god that he did not do it, and he doesn’t have to be charged. a student accused mr X of raping her and mr X said “i swear in the name of god, of allah, that i did not rape her”… then that’s it, no charge, no case, he goes free. easy as that if all were to do what our PM did.

so far we notice countless of people accusing him of having links with altantuya but he keep on saying no no no, he does not have any links with altantuya. so all the others (like the missing PI, bala and altantuya’s cousin, burma) were lying except him. great!

nobody in his sane mind would believe that the 2 police officers who were accused of killing altantuya did it on their own. they did it on somebody’s instructions! and what would they gain by killing altantuya? nothing! they did it in obedience to ‘someone’, not because they want to kill her as it was them who have no links with altantuya!

if the PM swear so much that he does not know altantuya at all, then why is he afraid of the name of altantuya being used here and there? why banned the name in the by-election campaign?

oh btw, have you heard, that while our government is busy banning the word ‘altantuya’, the word had been entered into cambridge learner’s dictionary! and it is defined as: 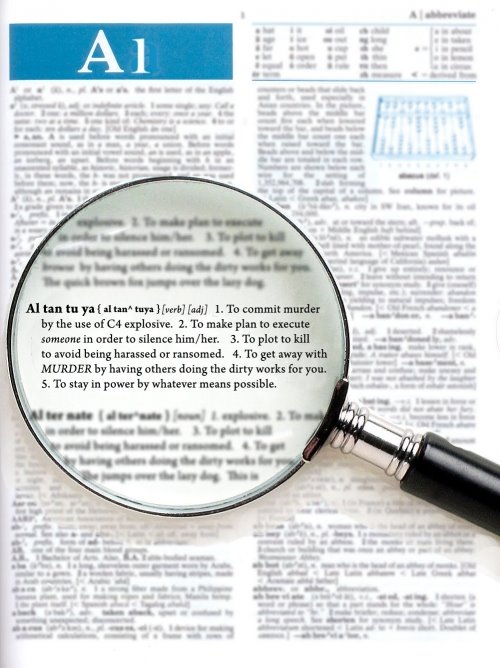