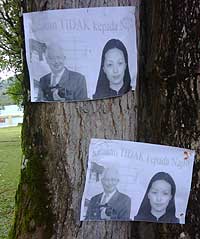 yes indeed. why then do you think the opposition PKR had been banned from raising the altantuya issue (see the article below) in all the 3 by-elections? if he really doesn’t know altantuya, haven’t met her before, has nothing to do with her murder, then why fear the opposition bringing her name up?

yes, and remember, he had also swear on the koran that he did not know altantuya… which means to say he was saying he is innocent… so why then afraid of her name being mentioned in connection to him?

yes, if he is really innocent, why with so many allegations thrown at him, he did not want to charge those person who threw the allegations, in court so that he can really prove his innocence?

that’s what everybody likes to know. what everybody waiting for. go to court. proof his innocence. get this all clear up before he became PM. if not, the ghost of altantuya will be always hovering over his head.

oh well, malaysia had done it again – the trampling of democracy. it banned the opposition from i) raising the altantuya issue, ii) no instigating the crowd by questioning the perak’s sultan’s decision and iii) no raising of racial and religious issues. also PKR must  ensure that the crowd at its ceramah is confined to a specific area where the event is being held.

what? the 3 R’s? i thought that was UMNO’s favourite practise – race, religion and royalty. it’s UMNO who like to raise the 3 R’s. i guess the home minister and the police will set different standards for UMNO and for opposition – what UMNO raised will not be consider racial and religious but whatever opposition raised will be considered as such. why, i think during nomination day, i even heard BN supporters shouting "daulat tuanku" (on the TV). why bringing in the king on the campaign? hearing that, reminds me of what one writer (forgot who) wrote that it was UMNO who embarassed the king.

ok coming back to the ban –  this is pressing down on the freedom of expression, as the taiping  PKR deputy chief chan lih kang said.

"These restrictions are new. They have never been imposed before," said Chan, who is also the Teja state assemblyperson.

"We are not be appealing against these restrictions and will be not be adhering to them as well."

He said PKR is ready to face whatever action the police take against the party for breaching the conditions.

"They cannot stop us from exercising our freedom of expression," he said.

it seems that only PKR had been slapped with this ban as PAS said they did not know anything about this yet (but they had been told to stop their ceramah by 11.00pm).. yes…. yet. i bet you sooner or later, of course they’ll be slapped with these restrictions too.

this ban is really ridiculous. another show of the soon to be PM’s might. yes, that was what many people think so too if you read the comments from the malaysian insider. or a show of his madness, as lim kit siang put it.  do read lim kit siang’s post and find out the other madness of the soon-to-be-but-hope-won’t-be-but-looks-like-it-will-be PM.

oh have you also feel the ghost of altantuya during UMNO’s general assembly?

The opposition has been dealt with a severe blow in the run-up to the April 7 by-elections after it was barred from bringing up a number of controversial issues including the murder of Mongolian national Altantuya Shaariibuu in their electoral campaign.

The impact of the home ministry ban was first felt in Bukit Gantang earlier today.

A state PKR leader, who had no prior knowledge of the home ministry ban, said that the police have imposed several new conditions when issuing permits for the party’s ceramah in that Parliament constituency.

Among the main restrictions were:

* No instigating the crowd by questioning the Perak sultan’s decision

* No mention of the Altantuya issue must be made

In addition, PKR must ensure that the crowd at its ceramah is confined to a specific area where the event is being held. [see below]

The police have warned that action will be taken if the crowd spills beyond the permitted area, said the state leader, Lau Teck Hai, who had applied for the permits on behalf of his party.

Lau, who is political secretary to PKR’s Kuala Sepetang state representative Tai Sing Ng, was told to go to the Taiping district police headquarters yesterday where he was informed of the conditions.

PKR de facto leader Anwar Ibrahim is expected to be in Bukit Gantang tomorrow as part of his campaign trail.

Addressing a press conference on the matter this afternoon in Taiping, Perak PKR deputy chief Chan Lih Kang said the party was ready to defy the police on these restrictions.

He also said that it would not appeal against the police decision to impose such restrictions.

"These restrictions are new. They have never been imposed before," said Chan, who is also the Teja state assemblyperson.

"We are not be appealing against these restrictions and will be not be adhering to them as well."

He said PKR is ready to face whatever action the police take against the party for breaching the conditions.

"They cannot stop us from exercising our freedom of expression," he said. 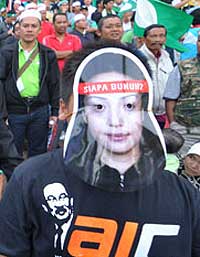 However, PAS, whose candidate Mohd Nizar Jamaluddin is contesting the by-election, has not be officially told about these new restrictions.

It is learnt that PAS was nevertheless told to stop its ceramah by 11pm so that this does not cause any disturbance in village areas.

However with the announcement by Syed Hamid about the ban, it is evident that PAS too would be affected.

The Altantuya issue has been used by the opposition, especially the PKR, to implicate incoming premier Najib Abdul Razak in the death of the Mongolian woman, a charge which the Umno politician has repeatedly denied.

As in previous election campaigns, several posters of Altantuya and Najib have already found their way to Bukit Gantang.

Altantuya’s remains were found scattered in a jungle reserve in Shah Alam, Selangor on Oct 19, 2006.

Two special elite policemen, who were bodyguards to VIPs including Najib, are facing murder charge. The verdict is expected early next month.

The opposition has also been highlighting the manner in which Perak Umno, led by Najib, ‘stole’ the state government from Pakatan.

Mohd Nizar has subsequently refused to step down as menteri besar although the Perak sultan had ordered him to do so. This led to him being accused of committing derhaka (treason) against the sultan.

It is being held following the death of PAS member of parliament Roslan Shaharum on Feb 9 from a heart attack.

Meanwhile in Bukit Selambau, it is learnt that one additional restriction imposed on political parties is that all ceramah must be held indoors.

Watch what you say, warns IGP

Meanwhile in a related development, the police chief issued a warning to all political parties not to incite, provoke or utter words that are deemed to be seditious.

Inspector-General of Police Musa Hassan also said that they must avoid making unfounded and baseless allegations on their opponents or the party they represented.

"Police will be monitoring all political ceramah and will record them. We urge everyone including supporters not to provoke or taunt anyone during their campaigns," he said in a statement today.

Musa also added that the police would beef up security in all three by-election spots to prevent untoward incidents.

(note: both pictures taken from malaysiakini)