You are here: Home › announcement › BN candidate for by-election announced 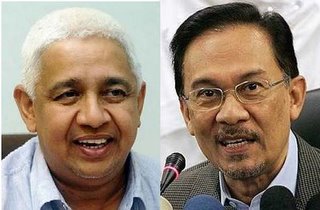 it is seberang jaya assemblyman, arif shah omar shah (picture left), as i came across in malaysiakini. the seberang jaya state constituency is one of three state seats under permatang pauh. the other two are permatang pasir and penanti, which are currently held  PAS and PKR respectively.

Arif Shah is a two-term state representative. He can speak fluent Mandarin, an advantage obviously seen by the BN as a move to swing back the Chinese voters back to it.

whoa! trying to attract chinese voters i see. however, it is not what the man able to speak but what the man is that will attract voters, all races included.

As for the candidate himself, Arif Shah said that he was confident of wrestling the seat away from PKR. He however added that he might not be able to do so with an overwhelming majority.

"Anwar may be good in one thing but not everything. People need a service-oriented MP," he added.

looks like arif shah is confident he will win! well, good luck to him,

NOTE:  please viist the MAFREL blog for my post on MAFREL’s temporaty operation centre and the meetings we had.