You are here: Home › general › my faith and social justice 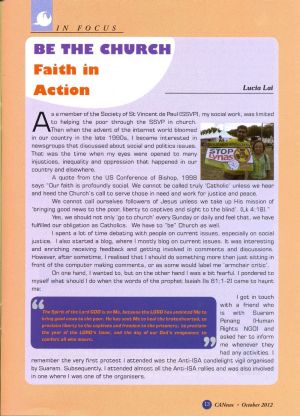 in line with the year of faith, which begins today (11 oct. 2012), this month's catholic asian news (CANews)  focus on the year of faith.  i was invited by the editor to contribute an article to it related to the heading mentioned here. the article was published in this month's catholic asian news. the following is an unedited version of my article.

——————————————————–
“Show us your faith, and we will believe you.” The challenge was thrown to a young Frederic Ozanam in 1833. Ozanam was in a fiery debate, speaking in defense of the Church, when this challenge was thrown to him to prove the practical values of his Christian beliefs. Taking up the challenge, Ozanam formed a small group to help the poor and the oppressed – and thus was born the Society of St Vincent de Paul (SSVP).
I am a member of SSVP for near 20 years and I must say I have manifest my faith to others, especially the non Christians. Some of the non Christians that we helped refers to us as “The Church people” or “Jesus’ people”.
I remember one old Hindu lady said to us during one of our visit, “You all church people very good. You go to church, you also come to help us.”
Yes, we should not only ‘go to church’ every Sunday or daily and feel that, we have fulfill our obligation as Catholics.
A quote from the US Conference of Bishop, 1998 says “Our faith is profoundly social. We cannot be called truly ‘Catholic’ unless we hear and heed the Church’s call to serve those in need and work for justice and peace.  We cannot called ourselves followers of Jesus unless we take up his mission of ‘bringing good news to the poor, liberty to captives and sight to the blind’. (Lk 4:18).”
My social work, then was limited to helping the poor through the SSVP in church. Then when the advent of the internet world bloomed in our country in the late 1990s, I became interested in newsgroups that discussed about social and politics issues.  That was the time when my eyes were opened to many injustices, inequality and oppression that happened in our country and elsewhere.
I spent a lot of time debating with people on current issues, especially on social justice.  I also started a blog, where I mostly blog on current issues. It was interesting and enriching receiving feedbacks and involved in comments and discussions.  However, after sometime, my heart tells me that I should do something more than sitting in front of the computer making comments, or as some would label me ‘armchair critic’.
Like Frederic Ozanam, who was challenged by his friends, some of my internet friends challenged me to go out and do something instead of  just talking about the issues on the net.
On one hand, I wanted to but on the other hand I was a bit fearful. I ponder to myself what should I do when the words of the prophet Isaiah (Is 61;1-2) came to haunt me – The Spirit of the Lord God is on Me, because the Lord has anointed Me to bring good news to the poor. He has sent Me to healthe brokenhearted, to proclaim liberty to the captives and freedom to the prisoners;  to proclaim the year of the Lord’s favor, and the day of our God’s vengeance; to comfort all who mourn. Ah! I thought to myself, I should have no fear as the Spirit of the Lord will be upon me. 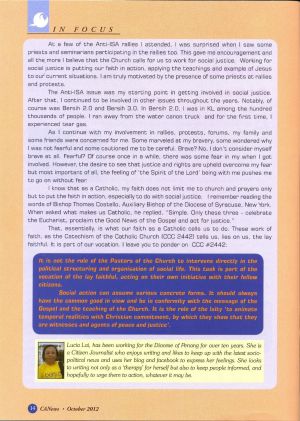 I get in touch with my friend who is in Suaram Penang (Human Rights NGO) and asked her to inform me if they have any activities. I remember the very first protest I attended was the Anti-ISA candlelight vigil organized by Suaram. Subsequently, I attended almost all the Anti-ISA rallies and was also involved in one where I was one of the organizer.
At a few of the Anti-ISA rally I attended, I was surprised when I saw some priests and seminarians participating in the rallies too. This gives me encouragement and all the more I believe that the Church calls for us to work for social justice.  Working for social justice is putting our faith in action, applying the teachings and example of Jesus to our current situations. This is what some priests had preached to us.
Truly, I was motivated by the presence of priests at rallies and protests. The Anti-ISA rally in PJ in Nov. 2008, where Fr Paulino was arrested, I was present (my two Penang friends were arrested too). I was at the police station all night and I had met Fr Paulino and spoke to him briefly in the police station. The Anti-ISA rally that I was one of the organizer, when our MC was arrested, a few priests and seminarians followed us to the police station and stayed with us for an hour. Even Archbishop Soter Fernandez were with us until midnight, in the police station to lend his support.
The Anti-ISA issue was my starting point in getting involved in social justice. After that, I continued to be involved in other issues throughout the years. Notably, of course was Bersih 2.0 and Bersih 3.0. In Bersih 2.0, I was in KL among the hundred thousands of people. I ran away from the water canon truck  and for the first time, I experienced tear gas.
As I continue with my involvement in rallies, protests, forums, my family and some friends were concerned for me. Some marveled at my bravery, some wonder why I was not fearful and some cautioned me to be careful and said that one day I might get arrested. Even my parish priest, one day said jokingly to my mother “Aunty, one day, you’ll see your daughter in prison.”
Brave? No, I don’t consider myself brave at all. Fearful? Of course once in a while, there was some fear in my when I got involved. However, the desire to see that justice and rights are uphold overcome the fear but most important of all, the feeling of ‘the Spirit of the Lord’ being with me pushes me to go on without fear.
I know that as a Catholic, my faith does not limit me to church and prayers only but to put the faith in action, especially to do with social justice.   I remember one day reading on the internet, the words of Bishop Thomas Costello, Auxiliary Bishop of the Diocese of Syracuse, New York. When asked what makes us Catholic, he replied, “Simple. Only these three – celebrate the Eucharist, proclaim the Good News of the Gospel and act for justice.”
That, essentially, is what our faith as a Catholic calls us to do. These work of faith, as the Catechism of the Catholic Church (CCC 2442) tells us, lies on us, the lay faithful. It is part of our vocation.
I leave you with CCCC #2442 to ponder on.
CCCC  #2442: It is not the role of the Pastors of the Church to intervene directly in the political structuring and organization of social life. This task is part of the vocation of the lay faithful, acting on their own initiative with their fellow citizens. Social action can assume various concrete forms. It should always have the common good in view and be in conformity with the message of the Gospel and the teaching of the Church. It is the role of the laity ‘to animate temporal realities with Christian commitment, by which they show that they are witnesses and agents of peace and justice’. (SRS 47 # 6; cf. 42)