You are here: Home › general › mob attack! malay gangsters! must be umno hired… 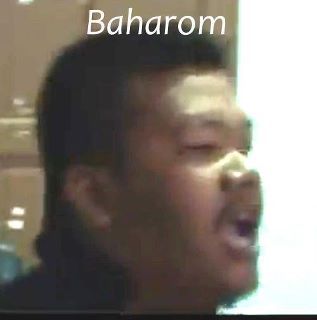 UPDATED 25 JAN: the real name of this gangster (whom people had label as 'fat pig' or 'ketua babi) is Muhamad Razali – he's on facebook!

yes… because the gangsters were seen with umno flag and wearing umno t-shirts.

this happened few days ago but i just got to put it up on my blog. should not missed posting about it. must let everyone know… though of course it won't be everyone since nobody reads my blog… well er… then it's just for me to vent my anger and for record on my blog.

what am i talking about? the umno gangsters who disrupt the ABU hindraf ceramah in klang on sat., 21 jan. read about it in free malaysia today, of which there is a video there but here i also put up another video.

if you watch the video, you would have felt very angry too at the action of the gangster, especially the fat man, who btw, someone posted his picture in facebook, so i copy and posted it here (as you see on the left). from the video, i saw, the way this fat man walked in… ayoh!… you can see his style of walking really gangster type and as though he was such a proud smart alec. he must be the leader as he started it all… walked in with his stupid gangsterish walk and throw the leaflets around. cannot tahan seeing him like that!

if you read the free malaysia today report, you notice what the shah alam OCPD said – he said the ceramah, an anti umno ceramah was held in a predominantly malay area and the villagers were angry that there were malays who attended the ceramah. why angry? if the villagers don't want to attend, so don't, why stop others from attending? you think all malays are pro umno? why, the speakers, i think 3 of them are malays themselves! further the nerve of him to say:

“The act of holding the ceramah was provocative. How can you hold such a meeting in a predominantly Malay area? No permit was requested as well,” he said.

what kind of nonsense talk is this, especially coming from a OCPD? first of all, what do you mean by provocative? are you trying to blame the organisers instead? and why should the organisers applied for a permit when it was held indoor?

this is sad. very sad for malaysia. what is the meaning of this that we can't hold a ceramah indoor, without being set upon by mob like the umno gangsters? and do you know one of those in the mob, was a police (SB)?? yes indeed, read haris ibrahim's blog.and see for yourself.