hooligans… or in our local lingua '1malaysia samseng'.  plenty of them around during the 13th general election. documented proof in videos. why i mentioned 1malaysia? they were wearing the 1malaysia t-shirts!  we all know 1malaysia club is aligned to barisan nasional (BN), don't we. in another video, the hooligans were wearing  'i luv PM' t-shirt. gosh! supporters of the PM are hooligans? figures!! the PM did not speak out to condemn them too! just imagine if the hooligans were from PR, he and all the umnoputera would jumped up at once to condemn the hooligans.

the first  video here –  happened in pengkalan pegoh, ipoh on 3 may when a group of PR supporters were having a peaceful flash mob on the streets. suddenly, for no reason at all, a group of 1malaysia samseng (the video stated they are umno supporters)  came on bike and several of them started to attack the PR supporters who were holding flashcards.

look! especially towards the end…  2.22 onwards….  and especially at 2.26, the man in red shirt, holding a stick was wear… what? what t-shirt?? can you see the words there? it clearly stated "i love PM" (with the 'love' in heart symbol).

this is the picture taken from the video to show you clearly the 2 bastards who love the PM as two of the group of hooligans. so shameful of najib razak! 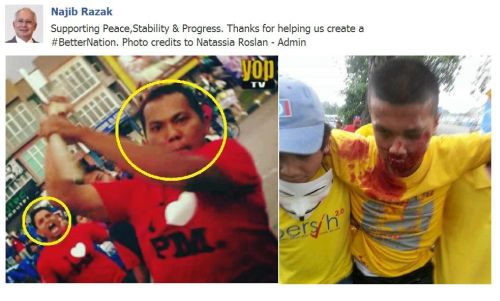 the second video here showed even worst gangsterish action – throwing tables and chairs and plates too at one elderly man.  think there were about 20 or 30 of them youngsters! all wearing 1malaysia/BN t-shirts. imagine! more than 20 youngsters attacking one lone elderly man.

this happened inside the dehappy restaurant in macalsiter road (the end near komtar, opposite heng ee primary school and bank simpanan nasional). the man who was attacked was with his family/friends after attending the mega-ceramah at esplande on 3 may. he was wearing, i think, the ubah (or LGE) t-shirt. there were quite a number of those PR supporters who were there after the ceramah at the restaurant.

these 1malaysia samseng, of course BN supporters, were not happy with the PR supporters. they were making a lot of noises until this uncle cant' stand it and he just stood up and raise his hands, asking them not to be quiet…. and all of a sudden, the samseng ran to attack him! watch and you will be shocked!!.

finally this video showed the 1malaysia samseng descended on air putih, penang, the constituency where penang CM, lim guan eng stood as candidate.  it happened in front of the gong ming school, air itam on poling day, 5 may. you can tell easily they are 1malaysia samseng by the 1malaysia t-shirts they are wearing (blue wtih 1malaysia logo in front… and some with BN logo at the back).

of course these are only 3 of the many videos showing how 1malaysia supporters acted. can you believe…. the news and videos are all over the social media and obviously showing they are BN supporters yet none of the BN ministers spoke up to condemn them. yes, we can believe that…. they are the umno/BN government of 56 years. 🙁