You are here: Home › christian › thanks JAIS, hasan ali… 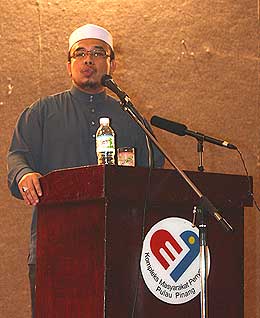 for telling the world the faith of muslim are weak.

and sincere thanks to the wise azri, as he spoke out here:

“It is the right of anyone to help whomever they want. As long as rules and laws are followed, one can help another regardless of race or religion,” said Asri.

Asri also noted that it is not against the law for Muslims to receive help from non-Muslims, what more when then former are in difficulty.

the wise azri, a true muslim, had spoken again!

i’m a long time member of the society of st vincent de paul (SSVP), a society that helps the poor and marginalised, a national society.  in most of the states, the poor people that SSVP help does include muslim.  many years back, during the aceh tsunami, the church had helped a lot of muslim fishermen. so what’s wrong with that? absolutely nothing of course but unfortunately there were many idiots muslims who choose to see proselytising everywhere each time they found out the christians are helping their fellow muslims. why?

why do i refer to them as ‘idiots’? simply because it is through their own action, that they themselves are shaming islam, making people laugh at their own religion. actually i had talked about this hundreds, or even thousands of times – what these idiots did only served to tell us that they don’t trust their own muslim brethren, that they think their own muslm’s faith is weak!!

why are these idiots so quick to pick on christians… that just because the christians are doing a good deed… to say that they are proselytising. what about then the orang asli department officials (JHEOA) try to convert the orang asli into islam? the JHEOA will only give benefits to the orang asli if they convert to islam!  why they did the idiots keep quiet? oops. silly. it is an offence to proselytisise to muslim but not the other way round. nice country we live in.

ok lah i’m too tired to talk about this anymore as the more i talk the more i will feel geram. i’ll just put in some interesting links here so that i can easy refer when i need them.  first, the malaysiakini article as mentioned above.

Malaysiakini
If Muslims turn to others for help, who’s to blame?

Outspoken religious scholar Mohd Asri Zainul Abidin has urged Muslims in positions of authority in religious bodies to cease their knee-jerk reactions to those of the community who – denied help by their own brethren – turn to other religious communities for help.

Commenting on the controversial raid by the Selangor Islamic Religious Department (Jais) on a multiracial dinner organised in a church compound in which poor Muslims were allegedly involved in proselytising efforts, Asri (right) said Islamic bodies have no one to fault but themselves if poor and vulnerable Muslims accept offers of assistance from non-Muslim based organisations. And if such people in need are in such a state as to compromise their religious faith in order to gain material assistance, it is only human nature that they come under the influence of those who accord them better treatment. “Every person is affected by those who treat them well. It is human nature. If a person is of weak faith, perhaps even his religion might be surrendered. Those who are influenced by the graciousness of church officials, that is not strange at all.

“What is strange is how, in a Muslim country, there are those of us in the community who are willing to change our religion because dissatisfaction with the Muslim community. On the other hand, they are influenced by the good treatment they receive from those of other religions.“Are the slogans of our religion merely cosmetic and are not grounded in the realities of life?” asked Asri, a former mufti of Perlis, in a statement.The USM professor was referring to claims by Selangor exco Dr Mohd Hasan Ali that Jais officers had raided the multiracial thanksgiving-fund raising dinner held at the Damansara Utama Methodist Church (DUMC) due to evidence that proselytisation was taking place and in which a number of Muslims were targetted.This has been disputed by church leaders, but reports emerged yesterday in Malay dailies Berita Harian and Harian Metro where guests at the dinner were said to have been hard-up Muslims who had received aid from the Christian group.Harian Metro reported that these Muslims had secretly converted to Christianity as a result and were part of an “underground” movement to spread the religion nationwide.

The daily also reported eyewitness accounts that Malay-language bibles were distributed at the dinner held at the DUMC.Berita Harian quoted one “Jasmine”, who said she had converted after receiving financial assistance from the group of Christian organisations.Another ‘convert’, known only as “Adazhan” reportedly told the newspaper that families received as much as RM1,000 a month, as long as they attend the Christian groups’ programmes.

Zeroing in on the hardship of those Muslims said to have been present during the dinner, Asri asked: “Where have our zakat alms gone? Hundreds of millions (of ringgit) is collected every year, but how is it that no one has been able to help the poor out of their difficulties so that they need not beg from others?“Why is there such bureaucratic red-tape for a poor person when seeking zakat assistance? Anyone who has had to deal with this matter would have experienced it. Just to get RM100-200, there would be a lot of difficulties.

“But the zakat offices look opulent, the salaries of the officers and their bosses are high, and the equipment look really sophisticated. Are the costs high because of the need to collect funds from contributors, while efforts to seek qualified beneficiaries are half-hearted?“Among the aims of zakat is to pull hearts towards Islam. That is why converts (to Islam) have a right to zakat. Has the management of zakat failed up to now to accomplish this to the point that Muslims are leaving Islam because of the failure to obtain help from Muslims, particularly from the zakat authorities?”Asri also noted that it is not against the law for Muslims to receive help from non-Muslims, what more when then former are in difficulty. Neither, he added, is it wrong for non-Muslims to extend assistance to those they seek to help.“Just because we fail to help, let’s not blame others for extending their hand,” said Asri.