You are here: Home › general › An Xmas card to my PM

Shalom and Yuletide greetings of peace, love, and blessings. 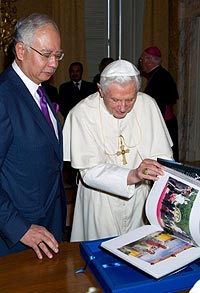 Notwithstanding the crucifix controversy during the Christmas reception for you by the Christian community last year, you have decided to join their celebrations this year again. This reflects boldness and courage on your part, Sir.

This augurs well for peace and harmony in the country. It goes without saying that we in Malaysia, continue to enjoy good interfaith relations despite efforts of incendiary bigots in our midst to destroy it. Alhamdulillah, such heinous acts are but in vain as the Lord God Almighty is indeed sovereign over our beloved homeland. Hallelujah.

You fondly recall your meeting with Pope Benedict XVI last year, and that Malaysia has formally established diplomatic relations with the Vatican City. As pointed out by you, "another step forward came last week as the government announced that it will ensure that any Malaysian Christian who wishes to travel to Jerusalem for a pilgrimage is able to do so." This reflects the gentle face of Islam surely.

You also pointed out in your Christmas blog, "… since becoming prime minister I have placed a lot of emphasis on the unifying concepts of 1Malaysia and the Global Movement of the Moderates. These concepts are partly about establishing a dialogue, which is important, but I am also determined that they lead to real action too."

I am also encouraged that you would, "…have the pleasure of taking part in a tea party with members of the Christian community to mark Christmas and listen to their views."

Unfortunately, Sir, I would not be at the Christmas reception today as I am away from the country. Allow me to air my views by way of this Christmas card to you and I trust I will have your ear. Surely you are unlike the guy from Pahang who wants to cut off his ears and throw them into the Pahang River, probably polluting it in the process. Silly man, that one.

It's already over two months since a teacher at SK Bihai near Gua Musang in Kelantan had allegedly slapped four Orang Asli non-Muslim students, aged between 12 and 14, on Oct 23 because they had failed to recite the Muslim doa over lunch at their school.

They may be non-Muslims but they this is not the way to treat bumiputeras like them. Sir, your 1Malaysia unifying concepts compels you to act with urgency. Indeed, Islam must be seen as a tolerant religion.
Conversion to Islam of an under-age Iban schoolboy – Sarawak

You may not know it yet prime minister but a top Iban Catholic student of Kolej Datu Patinggi Abang Haji Abdillah – the prestigious residential Mara junior college in Kuching – was recently converted to Islam. This occurred just before his SPM exams without his parents' knowledge or permission. He comes from a very remote village.

This is not an isolated case as church leaders there will tell you that this has been going on for a very long time as part of the Umno-BN Islamisation strategy in Sarawak and Sabah.

Sir, you have two options. This first is to kill the rumour if indeed it turns out to be one. This does not take much effort or time to determine this matter one way or another. If indeed the conversion did take place, then the school need to explain how an under-age conversion can be allowed to take place in its premises without his parents' consent or knowledge.

There are no two ways about it, Sir. You have to act fast and quick to assure the Christian community, especially that of the Malay speaking bumiputera Christians of Sarawak and Sabah, that your 1Malaysia is exactly what it means. No backdoor conversion, please.

Recently, four under-age bumiputera Christian students, one Catholic and three Protestants, at a government residential school in Labuan were converted to Islam. The conversion allegedly took place during a school activity. Local pastors have taken the matter up to the school but it had denied the activity was organised by the school.

A comprehensive report has been compiled by church leaders there to be handed to the Sabah state government. But Labuan is a federal territory and as Jakim, or the Islamic Development Department, is parked under your nose in the Prime Minister's Office, it is within your power to intervene and act immediately to resolve the dispute without damaging religious harmony further.

All you need to do is ask to see the voluminous report. And act on it.

We have had enough of cow stealing but in this case, no more stealing sheep from the Good Shepherd please.

Sir, you are already familiar with this case as it was discussed by your cabinet just recently. Indeed, you had asked two Christian cabinet ministers, one from Sabah and the other from Sarawak, to act on the complaint immediately.

But what has happened? Nothing as usual. Does this mean that the National Registration Department can ignore cabinet directives?

The complaint is that bumiputera Christians in Sabah (and Sarawak) have been classified by the National Registration Department (NRD) as Muslims automatically when issuing them their MyKad simply on the basis that they have "bin" and "binti" in their names.

The NRD has refused to rectify their errors. Instead it has asked complainants to go to the syariah courts to get an order saying that they are Christians and indeed not Muslims. How much more ludicrous can your administration get?

Sir, if you mean what you say, then give the two federal minsters a kick in their butts and while at it make sure one lands on the bum of the NRD chief too. Can be done Sir, just execute the famous Bruce Lee one-leg-three-kicks.

The Allah word and the Al-Kitab

It has been three long years since the Kuala Lumpur High Court ruled on Jan 31, 2009 in favour of Herald, the Catholic Weekly, that even though Islam is the religion of the federation, this does not empower the government to prohibit the use of the word ‘Allah' by others. It also found that the word ‘Allah' was not exclusive to Muslims.

But your administration has appealed against it. The Court of Appeal is out on a stroll and not in any hurry to hear it. This is a travesty of justice. As prime minster you should not allow a useless judicial traffic cop to erect illegal roadblocks to justice.

The titular Roman Catholic archbishop of Kuala Lumpur was the one who sued your administration and won. I wonder what you will say to him when you meet him at today's tea party?