You are here: Home › christian › letter to the pope regarding the PM’s visit 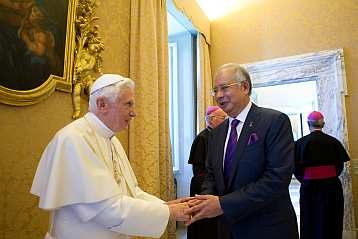 so… our holy father, the pope (i’m using ‘our’ here because i’m a catholic) met our PM… and it was mentioned that my country and our holy father’s country, vatican city, will establish diplomatic ties.

so what does that means? am i suppose to say “alleluia! praise the lord!”? will we, catholics in our country now have more freedom to practise our religion? will we be allowed to use the word ‘allah’ now? will christians get to import bibles (and christian books and CDs) easily now?

of course not, i bet you! AMEN!

(sidenote: what a pity, the pope’s robe is not yellow in colour.)

so why the visit eh? some people said it is to fish for votes from the catholics and christians. some said the PM is trying to appease catholics after many issues that made the catholics/christians unhappy cropped up. e.g issues on allah, alkitab, penang christian state, no cross during christmas high tea, and so on.

really? well i’m one catholic who will not be appeased at all. i won’t applaud his visit at all as i look to his visit as hypocritical. look at all that has been happening in our country lately. we are being suppressed by the government, when for example, we are not allowed to use the word ‘allah’ which, by the way is not copy-righted to malaysian muslim, we are not allowed to import bibles (and even if we do, there must be a stamp on them). why don’t the PM solved all these issues first before he meet the pope to establish diplomatic ties. what kind of diplomatic ties is he going to establish?

the first line from the malaysian insider reads:

Malaysia and the Vatican have agreed to establish formal diplomatic ties to promote mutual friendship and strengthen co-operation between both countries, Wisma Putra announced today.

well, actually of course i’m not the only catholic who doesn’t look favorably to the PM’s visit but lots of catholics too.  being very concerned with our PM’s visit fearing that the pope may not be aware of what’s happening in our country… or that our PM may sweet-talk the pope that all things are well with us catholics here,  a group of us concerned catholics (and some christians too) had signed a joint letter addressed to the pope. the letter was composed by one of our prominent catholic activist who is a professorial.  according to him, the letter did reach the pope before the PM’s visit. i am one of those who had endorsed the letter. for the content of the full letter, please visit aliran’s website.

on the other hand, martin jalleh had posted an open letter in his facebook.  the following is his letter:

don’t forget eh to read the letter that reached the pope: