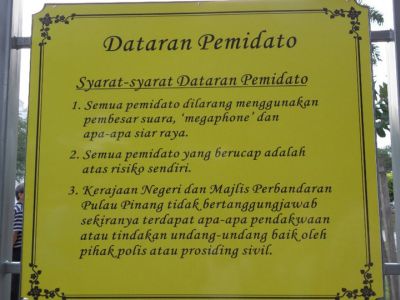 wonder how many penangites are aware that exactly today, a year ago, the speakers square was launched. since then, there had been many events going on, of which i had attended several.  most notable was the ‘abolish ISA’ gathering on 1 aug. last year, where the policemen out-number the participants! some unruly protestors were there and some activists got arrested.

when i attended the events at the speakers square, i never fail to take photos. please do visit my facebook photo album for photos to jog your memories of the events held there.

you can also read about the 1st anniversary write up by me in komunitikini.

the following is a report by andre loh,  a friend of mine, and an active  founding committee member of speakers square.

Below is my Report on Speakers’ Square as it approaches its 1st Anniversary. This is the second report of its kind, the first report being a half year review dated 21 October 2010. This report is presented in simple point form for clarity and covers mainly Sundays @ Speakers’ Square.

(2) Rukunegara, Love for People and Country
On 23 May 2010, the crowd, with their right hands raised, recited the Rukunegara which set the tone for what Speakers’ Square would be about – a venue to express Love, Peace, Hope and Desire.

Observation. The people love their country and demonstrate it by participating in meaningful songs such as the Negaraku and Rasa Sayang Eh. One can always sense that unity and discipline pervades the Square.

(3) Apolitical
A majority of the concerns of the speakers and performers have been apolitical (unbiased). Speakers have generally focused on issues which concern them and expressed their hopes and desires. Often making appeals to either the Federal or State Governments.

(4) Size of the Crowds – Average, Largest, Frequency of Use
a) There have been people speaking at Speakers’ Square on each occasion since 4 May 2010.
b) The average crowd size has been about 150 people on Sundays.
c) The Largest Crowd so far has been 320 persons -on 5 September 2010 “Say

On that day, there was a large spill over from the Forum on the Teoh Beng Hock Inquest held earlier in the afternoon at Han Chiang High School.  Michael Jackson’s “HEAL THE WORLD” was sung. There would have been more people if not for it being Bulan Ramadan.

(5) Speakers’ Square – Clearing Up Some Misconceptions
1) It is not managed by any authority.

2) Speakers / Performers are not registered and are free to come and go. There is no published record of who has come to the square to speak and great pains are taken to minimise red tape at Speakers’ Square. It should be kept this way.

3) There is no payment for speaking or organising. Everything is done in the spirit of voluntarism.

4) Food, drinks and the occasional gifts have not been funded by any authority or organisation. These have been sponsored by one or two committee members and some of the speakers.

(6) Speeches and Speakers
1) Speakers generally express their hope and desires. They wish to see Malaysia progress and they voice their hopes at Speakers’ Square.

2) During speeches, some of the crowd have expressed dissenting views but it has all been done in jest and taken in the right spirit. Speakers have generally accepted the notion that they can also be ignored or criticised.

3) Speakers come from various walks of life. Some are from NGOs who
speak as individuals and some representing their NGOs. There have been some who are active politicians while the majority of the speakers have been ordinary people.

(a) Journalists – Writers
At Speakers’ Square, we regard journalists as our Brothers & Sisters (“Saudara & Saudari”) and it has never been our intention to regard them as mere tools for disseminating information. They form part of the crowd and (being in the field of arts themselves) often actively participate in the singing / programme.

(b) Police & Policing
Police. There has not been any untoward incident at the Square. On 1 August 2010 there was an anti-ISA gathering where the crowd was noisy, energetic and the occasion marked by youthful exuberance. Sound judgement and prudence prevailed and gatherers and authority learned from the experience.

Note: i) The Police presence is deemed intimidating by some while it is welcomed by others.
ii) The Community at Speakers’ Square has generally practised self-policing.

(8) Thematic Days @ Speakers’ Square
a) Thematic Days have been able to draw larger crowds. “FATHER’S DAY AT SPEAKERS’ SQUARE” on 20 June 2010 had a spirit of spontaneity about it. The extensive coverage by the media of this event was helpful for Speakers’ Square, especially the photographs of Senior fathers of various races jointly cutting a cake.

b) Other themes such as “Say You’re Sorry Day”, “Sex & Relationship
Education & Baby Saving”, “Bulan Ramadan”, “Stop Sexual Crimes Against Children & Banning of Parasailing” and “Cleanliness and the Environment” have struck a chord with the people.

(9) Music
a) The crowd warms up to and enjoys singing a song or two -especially Rasa Sayang Eh.

b) Universally known songs such as Imagine, Heal The World and other popular Songs such as Country Roads, Sing A Song Of Freedom and American Dream sung with a Malaysian twist have had the crowd singing along.

(10) Other Matters
a) “Sub-Judice”. This was raised by a few members of the crowd during “Say You’re Sorry Day” when the “Teoh Beng Hock Team” from KL raised issues related to ongoing inquest. There was a heated debate.
We will invite interested and qualified persons to speak on sub-judice to provide clarification on what is viewed as “Sub-Judice” and what is not.

b) Comments have generally been very encouraging not only about the Launching of Speakers’ Square but the Leadership demonstrated by the key persons to keep it alive.

c) Tourism. Visitors from outstation and abroad have come to Speakers’
Square and have been impressed. This augurs well for Penang / Malaysia as she aspires to be a progressive city / nation.

the 1st anniversary celebration of speakers square will be on this sunday, 8 may, at 6.00pm. CM YB lim guan eng and YB chow kon yeow will be present. andre promised there’ll be exciting programmes going on, including lucky draw for 3 lucky winners. do come and show your support. this is our speakers square, this is OUR space to be heard.

One Response to "1st anniversary of speakers square, penang"