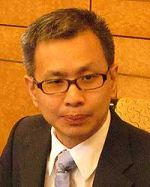 it was during his PM’s speech when launching an umno club for retired senior government officers at his official residence on saturday.

najib, our PM had asked:

“Who caused the incident of not offering prayers for the well-being of the king? Who wanted Universiti Teknologi Mara to be opened to the non-Malays. Not Umno, but the other side,”

tony pua, DAP MP, (picture) said that najib asked those questions in true ‘hulubalang’ (warrior) ala perkasa style and it shows that he is, like what his deputy admitted, a malay first, a malaysian second.

oh well, so didn’t i say 1malaysia is all bullshit? and lim kit  siiang described it as ‘just bunkum’! as reported in malaysiakini. (click on ‘read more’ to read). also read the comments here. someone said it nicely:

The DAP has accused Prime Minister Najib Abdul Razak of using “racial rhetoric and falsehoods” to incite anger among Malay civil servants so that they would continue to support Umno.

“The Prime Minister showed his true colours when he chastised the civil service for not demonstrating blind loyalty to Umno,” said the party’s national publicity secretary Tony Pua in a press statement today.He was referring to the PM’s speech when launching an Umno club for retired senior government officers at his official residence, Seri Perdana, in Putrajaya yesterday.Pua pointed to two of Najib’s statements which he said clearly sought to bring up racial prejudices:

“I want to ask – who were the ones who questioned Article 153 in the Constitution? Malay privileges – who questioned them?”“Who caused the incident of not offering prayers for the well-being of the king? Who wanted Universiti Teknologi Mara to be opened to the non-Malays. Not Umno, but the other side,” said Najib in hisspeech.

Pua who is also Petaling Jaya Utara MP, contended that Najib’s remarks smelled of a “true Perkasa hulubalang (warrior)”, in reference to the Malay rights group’s tendency to mix “race discord with racial rhetoric”.This, Pua said, is the reason why Najib has taken extra pains not to criticise Perkasa for their “non-stop racist and extremist posturing” despite them causing increased racial tensions.Najib’s true coloursThe parliamentarian also said that the PM’s remarks revealed his true colours as “Malay first, Malaysian second”, just like his deputy Muhyiddin Yassin had proclaimed himself to be earlier this year.

“It fully explains his lack of willingness to mete out harsh punishments against those who has spewed racist comments over the past few years, including Penang (Umno)’s Ahmad Ismail, the teachers who insulted minority races, his own special assistant Nasir Safar (and), the BTN assistant director who referred to Indians as Si Botol,” he alleged further.Pua claimed that Najib has screeched a 180-degree about-turn from his calls for “moderation” and “market-friendly and merit-based” affirmative action.In his speech, Najib had said he was “baffled” with those civil servants and government pensioners who preferred to support the opposition.“Civil servants should know better that it is only Umno that can ensure our survival”, said Najib, who is also Umno presidentLoyalty to Umno = Loyalty to government?Pua said his main worry is that the premier seems unable to differentiate between loyalty to the government and loyalty to a particular political party.

“While the civil service needs to be loyal to the government of the day and carry out its policies diligently and professionally, the civil servants are allowed to have their own political ideals and preferences,” stressed Pua.He urged Najib to look at countries like Japan, US, UK, France or Australia, who are able to switch governments without the loyalty and political affiliation of the civil servants being questioned.

The DAP representative added that Najib’s reference to Umno as opposed to BN hints at racial and discriminatory priorities.

“Najib’s mention of “our survival” could only refer to Malay survival in the context of the civil service being dominated by Malays and Umno being a party exclusively for Malays,” claimed Pua.

He believe that this will “severely jeopardise” Malaysia’s goal of achieving a high income status as projected in the government’s and Economic Transformation Programme.“Malaysian talents overseas will resist returning while foreign and local investors will seek greener pastures elsewhere if unequal opportunities and unbridled race-based policies continue to be practiced,”said Pua.

On the same issue, DAP supremo Lim Kit Siang (left) in a statement also lambasted the PM’s “shocking attempt to compromise the civil service and government pensioners to enlist them to be Umno supporters”.Lim said this proved that Najib’s talk of transformation and 1Malaysia was “all just bunkum” and showed “utter contempt” for the other BN component parties.