You are here: Home › christian › hoo haa on christian nation 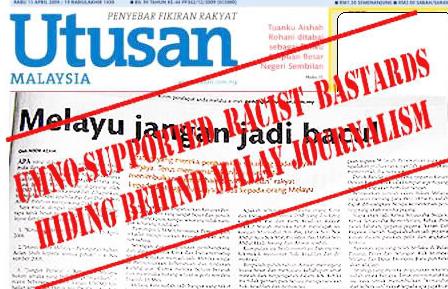 by now, everybody knows about this issue, where utusan front-paged a report ‘christianity, official religion?’; if you don’t, where have you been?

anyway, the latest news was that someone – a malay muslim DAP member,  -mohammed razali abdul rahman, all of a sudden emerged (after 7 days) to made a police report that he was present during the gathering of the pastors at a hotel in penang. he was saying something about there is some truth in the utusan report – that the pastors did pray for christianiy to be the official religion and for a christian PM.

huh? why came out to say that, to lodge police report only 7 days later? hmm… don’t blame people for speculating then… “how much did UMNO paid you to say that?” – the most common speculation (and believable!).

very often, in christian prayers, they like to use the word ‘nation’. it could mean a lot of things. e.g. as one commenter at the malaysian insider stated, ‘nation of christians’ could means ‘nation in heaven with jesus’.  it’s a matter of interpretation. the malay DAP member choose to interpret the pastors prayers in a wrong way. look, in our catholic church, in the herald paper, every week, there is this ‘prayer for the nation’ on its front cover. when this prayer first came out, almost all the churches used to pray it every sunday during mass. now, i think, there are still churches who use it to pray but very few. this is how the prayer goes:

Let us proclaim the name of the Lord;
And ascribe greatness to our God!

Lord, your work is perfect.
And all your ways are just.
Let Your voice be heard today by all the nations!

O God, Judge of the nations, Put fear into our hearts
So that we may know that we are only human.

Father, the whole of creation groans and labours to be delivered from the bondage of corruption, into the glorious liberty of the children of God.

Lord Jesus, send forth Your Spirit of Truth and let this Spirit prove to ‘the powers that be’ how wrong they are about sin, righteousness and judgment.

O Lord, declare the power of your works to Your peoples and let us be filled with the knowledge of Your glory as the waters cover the sea.

Gather us, O Lord, in Your Name and may all worship the One True God.
Amen.

(A prayer composed from various Scripture verses of the Bible)

ok, let me be razali or the huge big barking dog (you know who – the one instrumental for starting all this, the one who is suppose to be put in ISA… but only IF he is a non malay muslim). let’s look at the last line – ‘gather us, o lord, in your name and may all worship the one true god’.  all. one true god.  oh dear me! all? all! all malaysians, including muslim! the christians (who prayed this) wants everyone to worship their god – does this means they want everybody to be christians? ‘may we all worship the one true god’ – hey that means hoping that everybody worship the christian god, which means turning the nation malaysia into a christian nation! ya allah!! quick! quick, tell it to utusan!

see, that’s one way of interpreting it IF you have bad intentions.  the rabid barking dog is an umno loyalist, so is utusan.  and this issue involve christians and DAP – their enemies, so of course you know lah, utusan and the umno govt played the issue up (bad intentions), hence all the hoo-haa over nothing actually. to think that the christian pastors would really prayed for malaysia to be a christian state and for a christian PM is really damn ridiculous! made no sense at all to me. (anyway, true, what someone said, what is wrong with praying for a christian PM?).  ohh… actually i have thought of not blogging on this issue but i cannot stand it when all of a sudden, this malay muslim DAP member came out to support umno utusan, when i read at susan loone’s facebook about his report and tv3 news on the ‘nation’ part.