You are here: Home › general › penang lost its ‘roaring tiger’ 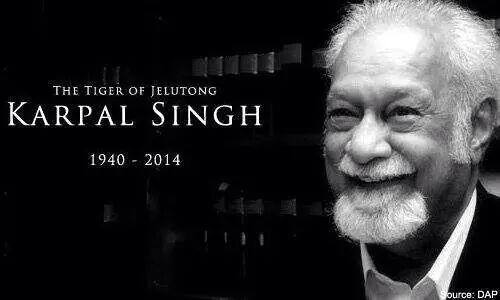 yesterday morning i was not working, so i woke up at 9.00am. as always, the first thing i did after i woke up is to get online, going to facebook. imagine my shock when i saw so many postings talking about karpal’s death. i was stunned, at first thinking it was not true but going to the many online media, i read about his death too and realised it was true.

how sad. karpal singh, who is fondly known as ‘the jelutong tiger’ (jelutong being the area he first served as MP), was a very well known personality. i like him because he speaks without fear or favour. he was a man of principle. he stands up for what is right, did not give a damn to what others think. i had seen him in person and heard his speeches many times due to the many ceramah (forum), protests, gatherings that i attended. his speeches was never boring. he was always welcome with a thunderous applause and at times cheering and whistles when it was his turn to speak. this showed how much he was loved by the people.

his death was indeed a great loss to malaysians as he was seen to be one who courageously speak up whenever he sees something had gone wrong in the country. he was like a voice for us – the tiger who roars for us on our behalf. we will surely missed him, particularly penangites since penang is his hometown.

karpal committed to a broader, inclusive, malaysian identity
we must carry on karpal’s struggle, says kit siang
fighting for justice till the very end
karpal ranked with mahatma gandhi
tribute to the tiger of jelutong
ten things about karpal

it’s not surprise, as rightly so, that his funeral will be at state level. the public ceremony will be held on sunday, 20 april at dewan sri  pinang (light street) from 9.00am to 11.00am. if you are free that day/time, do attend to pay tribute to such an awesome extradonaire great man.