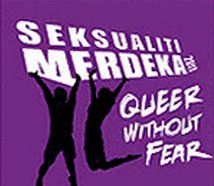 so much had been said already regarding the seksuality merdeka festival, so i'm not going to say much. one of the reason i decided to blog on this issue is because i wanted to post this view from ahmad fuad rahmat, who is a research fellow with the islamic renaissance front (IRF). many a times, he, and some other members from IRF had come up with very good meaningful articles on certain issues. i always like their writings and always agree fully with what they wrote. they are the few liberal muslims who dare to speak up and who speaks up reasonably, logically, rationally and wisely.

ok scroll down to read ahmad's article if you don't want to read my comments. for sure, i have to say something on the issue. what is my view? definitely that the police was very wrong to ban the seksuality merdeka festival. this festival had been held since 2008 without any trouble, why all of a sudden this year, it was banned? ah… just because several muslim NGO groups… the extremists one like perkasa made a lot of noises, the police acted. so what else is new.

homosexuals – the lesbians, gays, bisexual, transgender – shorten as LGBT, are just as human as you and i and they have rights just like every humans. they are no different from us, except they have a different… well, queer (well some say 'abnormal') kind of sexual orientation. whatever their sexual preference is none of my business. it's not for me to condemn them. as long as these people do what they do in private and what they do, does not harm people, let them be.

the LGBT are one of the most misunderstood people and oh yes, marginalised. whenever we talk about 'marginalised people', we usually think only of the poor, the orang asli, the migrants but we forgot the LGBT.  so, in order for people to understand them better, well, once in a year, they organise this seksuality merdeka festival. by allowing this festival to go on, doesn't mean we support homosexuality or that we are encouraging them. by allowing the festival to go on, means, first, it's their rights to organise this. for sure this festival won't bring about 'public chaos' as the police suggested! ridiculous! secondly, by allowing this festival, we, the so called straights, can get to understand the feelings of LGBT, and thus we won't marginalised them so much. i don't support homosexuality but i do want to learn more about homosexuality. nothing's wrong with that. it's just like for example why can't i attend an exhibition about islam, even though i'm a non muslim? as we always know, the authorities will ban muslim from attending an exhibition on christianity. why? ok ok maybe this is bad comparision.

ok i think i had said enough. lots more to say especially on what that 'empty vessels that makes a lot of noises' NGO, perkasa had said. can you imagine labeling ambiga as anti-christ and calling for her to be detained under the ISA? plain ridiculous!! what more, ambiga is not one of the organiser too!  ok ok, let's read what ahmad fuad has to say now.
——————————————————————–
Malaysiakini
Seksualiti Merdeka: A plea for calm and rationality
by Ahmad Fuad Rahmat
COMMENT "We will freedom for freedom's sake, in and through particular circumstances. And in thus willing freedom, we discover that it depends entirely upon the freedom of others and that the freedom of others depends upon our own… I cannot make liberty my aim unless I make that of others equally my aim". (Jean-Paul Sartre, 1905-1980)

Anyone who is wronged must be helped. (Clause 43 of the Medinah Charter)

Our society is again in chaos and pandemonium following an event known as Seksualiti Merdeka. Literally meaning Sexual Freedom/Independence, it is basically a festival celebrating the human rights of people of diverse sexual orientation and gender identity.

The theme "Queer Without Fear" is aimed to highlight the discrimination and persecution people face simply because of their sexual orientation and gender identity.

Although it is an annual event, first held in August 2008, it has never created such furore before. This time around, with the coming of Sir Elton John, it seems that all hell has broken loose. Seksualiti Merdeka has been attacked from almost every angle, be it from intolerant religious leaders or prejudiced politicians.

All kinds of intimidation and slanderous accusation have been levelled at the organisers and supporters of Seksualiti Merdeka. They are accused of promoting homosexuality and a hedonistic lifestyle.

Malaysians at large, and Muslims in particular, have to realise that we're living in a highly diverse community. We have to learn to be inclusive. What is more important is to have an open and critical discussion on the issues of gender and sexuality.

Such a discussion must firstly be informed. It must engage with the most up-to-date research on the issue of gender and human sexuality from the natural sciences, social sciences, critical theory and feminist studies.

The discussion must also be inclusive. It must incorporate perspectives from scholars and activists who are most engaged and active in the issue of gender equality and human rights.

It is very unlikely that the Muslims who are protesting Seksualiti Merdeka are completely oblivious to the presence of the LGBTQ community in Malaysia. What appears to be the problem is the fact that members of the community are now asserting their rights.

In other words, Seksualiti Merdeka is not evoking the reactions we are seeing because of its organisers' sexual orientation, but because it is an open show of force by the LGBTQ community to empower and educate themselves of their rights as Malaysians.

This represents a significant shift from the commonly held attitude among Malaysians that the LGBTQ community should be left to do what they want, so long as they do not seek full recognition as active and entitled citizens.

Seksualiti Merdeka should not be viewed as a transgression against Islam or Muslims in Malaysia but a simple demand for fundamental human rights.

Uphold the spirit of tolerance in Islam

While we may disagree on issues relating to morality, we have to respect a person as an individual. A person who embraces Islam has to be regarded as a Muslim. If that particular person has non-heteronormative inclinations, that does not give anyone the right to ostracise and oppress him or her.

As Prof Tariq Ramadan says, behaviours considered reprehensible under the general rules of morality cannot justify their ex-communication or alienation from society.

We are living in a heterogeneous society full of diversity. In order for a society to mature, it must be able to remodel itself to be inclusive in nature. There should be no discrimination based on gender or sexual orientation, irrespective of race and religion. Every single citizen has the right to live and express his or her conviction without fear.

In the spirit of democracy and fundamental liberty, we must respect the freedom of expression of all Malaysians.

The Medinah Charter too shows the importance of working across different opinions and ways of life to maintain a stable polity.

This spirit of tolerance and diversity in Islam must be upheld to ensure that Islam is not used for pure political mileage.

AHMAD FUAD RAHMAT is a research fellow with the Islamic Renaissance Front.