You are here: Home › announcement › christians, stand up and be counted!

whoo! hope someone won’t lodged a police report on me that i’m inciting the christians  (as to what happened to someone who twitted something about this). anyway, the following is from the 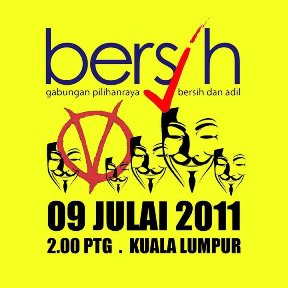 “When the elected misuse their powers and undermine the vital organs of the government, they have lost the right to stay in office. There are two ways to punish political perverts who have raped democracy: vote them out or take to the streets. The ballot box is the ideal choice, but the date with destiny has not been fixed.” Editorial, Herald News, July 3rd, 2011

The upcoming BERSIH 2.0 Rally scheduled for 9th July 2011, is all about making the voice of the voiceless heard for free and fair elections in Malaysia. Propagated by the government and government supported organisations like PERKASA , TV and newspapers have been portraying BERSIH with much controversy and myth.

For the record, BERSIH 2.0 is an independent coalition of 62 non-government organisations and they are unaffiliated to any political party. BERSIH is headed by Ms. S Ambiga . She has made it clear that this rally is about the ‘rakyat’ demanding for a free and fair election. She has also voiced that the reason for such a rally, is because the Election Commission has not been committed in making the necessary electoral reforms. While she did acknowledge that there were some small reforms, more is needed to ensure a free and fair election.

The demands of BERSIH 2.0 are stated below:

1. Clean up the electoral roll to address irregularities,

5. Ensure free and fair access for all political parties to the media,

7. Get rid of corruption, and

8. Put a stop to dirty politics.

The issue of the BERSIH Rally being illegal has been challenged by many. The Malaysian Consultative Council of Buddhism, Christianity, Hinduism, Sikhism and Taoism (MCCBCHST) has thrown its weight behind all three planned rallies on July 9 by stating “the “supreme law” of the court, the Federal Constitution guarantees the freedom of assembly.”

The Federal Constitution of Malaysia in Article 10 states that citizens have the right to “freedom of speech and expression,” which includes the right to peaceful assembly as well as the right to freedom of association.

It is tragic that many have been arrested during the past few weeks, just for supporting the BERSIH 2.0 rally. The authorities have used many laws and reason for the arrest. Some of the arrests go beyond explanation or justification. As of late, six, including Sungai Siput MP Dr Michael Jeyakumar, were re-arrested, under Section 3(1) of the Emergency Ordinance because they were suspected to be involved in activities disrupting the peace in the country.

The Emergency [Public Order and Prevention of Crime] Ordinance 1969 (“Ordinance”) came into force on May 16, 1969, in the aftermath of the race riots which erupted against a backdrop of the ruling coalition’s loss of its two-thirds majority in Parliament. In the wake of these riots in which over 200 people were killed, the King declared a state of emergency. Consequently, Parliament and the Constitution were suspended and the Ordinance was enacted. The Ordinance was devised as a direct response to the race riots. Just like the Internal Security Act 1960 [ISA] the Ordinance is another preventive detention law which allows the executive branch of government to detain an individual without trial. In brief, Section 3 of the Ordinance allows a Police Officer [PO] to arrest an individual if the PO suspects that an individual having acted, or being about to act, or being likely to act in any manner prejudicial to Public Order or if he has reason to believe that it is necessary for the suppression of violence or the protection of crimes, the individual may be detained in police custody for a period not exceeding 60 days (“initial period”). Upon expiry of the initial period the Minister by virtue of Section 4(1) of the Ordinance can detain the individual for a period not exceeding 2 years.

In recent times the Ordinance was used against violent criminals and suspected gangsters . The usage of the Ordinance on six Parti Sosialist Malaysia members is however, unprecedented.

This Ordinance has long past its due date and its relevance in today’s Malaysian legal context. The authorities however continue to abuse it for its own vested interest.

As Chirstians we cannot confine our faith lives to inside the church. We are called to live our faith vibrantly and to respond to the injustices that grip our society. In the context of the aforesaid arrest and detention, Chirstians can act in solidarity by sending memo’s, letters, emails and sign online petitions to the Prime Minister and Home Minister’s Department demanding for the immediate release of these activists and all those who were arrested in the course of this week.

As Christians, in faith, we are strongly guided by the teachings of Jesus, who always stood for truth, justice and fairness. Today, as Malaysians, we are faced with discrimination and violations to human rights in many forms. Drawing our strength from the Holy Eucharist, our weekly celebration must enable us to speak up and exercise our rights as the citizens of Malaysia. Let us ‘Stand up and Be Counted’ for all the victims violations. We take courage in the Gospel of Luke 4:18, which invites us to “proclaim liberty to the captives”.

Rest assured God is with us on this journey of change.

And what does the LORD require of you But to do justice, to love kindly, And to walk humbly with your God Micah 6:8

note:  summary of this in .pdf format as leaflet for distribution is available. if interested, contact me.