You are here: Home › christian › summouning evil sprits and blood sacrifices for a win

yes, a DEMONIC CEREMONY! yes, they went (and will go) to that extend to make sure they win! to protect their candidates!

read from free malaysia today, ‘sarawak summon spirits to protect BN‘.  and here i let you read from an email i get from a friend.

Christians, stand united & PRAY against the EVIL FORCES of darkness in Sarawak & in all Malaysia ! NOW !!

Following message is sent by Kok Moi and her husband who are pastors in SS Methodist, PJ.  Christians are encouraged to pray.

The source of this info is a church worker in Kuching who has been reaching out to the Sarawakian natives the last 18 months and is now going round the longhouses in view of April 16 state election. Nomination day is April 6…..

Kindly please storm heaven with your prayers on the elections in Sarawak till it ends….. We will defeat evil through Jesus Christ!!

Below plea for help from a Focus On Sarawak friend in Sarawak.  He is moving around the longhouses and will not have access to the Net.  Please inform prayer groups, inc NECF, MPN and any others that you know of.  The demonic ceremony is taking place at Betong.  Below the urgent message to all of us.

=====
BN CALLING UP DEMONS AND EVIL SPIRITS WITH BLOOD SACRIFICES

I don’t have internet access, pls put up all these prayers points at all network prayer…pls.

I am in Betong Areas – N30, N31,N32 – Saribas, Layar, and Bukit Saban. The BN (ALFRED JABU -DCM and teams are preparing the offerings and sacrifices to the gods on 5th April at 8pm sharp at Dewan Rentap- Betong (a Civic center).

There will be many…….and they are cursing & putting spells to all the opposition candidates, and those voters who votes for the opposition. There will ba slaughtering of chickens & piglets – for the blood as offerings to the many gods….

This is the 1st time they are doing it…..All the respectives BN candidates will be coming for this offering/sacrifices event by helicopters tomorrow. The ceremony will start at 8pm Tuesday evening till midnight.

Dooms and Hell fires will be called out from everywhere, using all all the evil spirits to cast spells and curses to those against them.

These will have a Bad impact, spiritual and physical on the IBAN Natives for another few generation if we as soldiers of CHRIST don’t stand as the shields against these dark forces!

I predict there will be some supernatural manifestations tomorrow in the surrounding areas.

I arrived in this area this noon, and going around etc. The christians and people don’t like BN, but fears and uncertainty!!! They fear they will be victimized if BN knew the longhses are voting for opposition. I have to rush now…..and no internet access. Line now are bad. Pls inform all prayer network and friends…urgent.

Update -The BN candidates N32 Bukit Saban Robert Lawson Chuat ak Vincent will not be joining this cursing/offering ceremony as ……this is wrong and un-christian, and I dont know whether the DCM Afred Jabu will get angry with his nephew Robert lawson Chuat..?.

the second email, which comes with this photo. 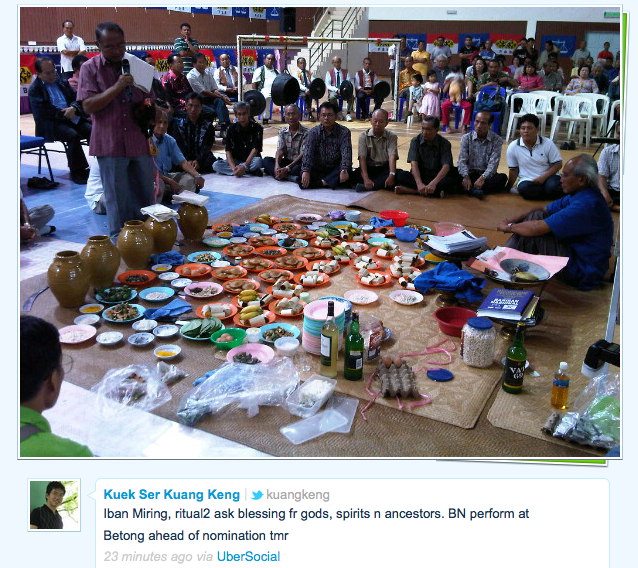 Here’s what went on at the scene as reported by Twitter user @kuangkeng in Sarawak! The email early today, was sent by a friend of a member of my church & the ritual did go on! It may look like a simple ceremony but I tell you the truth, demonic spirits are invoked from the pit of hell as they pledge their allegiance & summon them for help. When they ask for victory, it usually means ‘to the detriment of the people & all those who vote against them’ but I thank you for spreading the word & standing with me from 7:45pm – 1:00am praying online on Twitter! God will never allow such an act to prosper! Together we must lift Sarawak out of the enemy’s grasp & let God restore the land & its nation!