You are here: Home › malaysia › fighting for justice for teoh beng hock continues 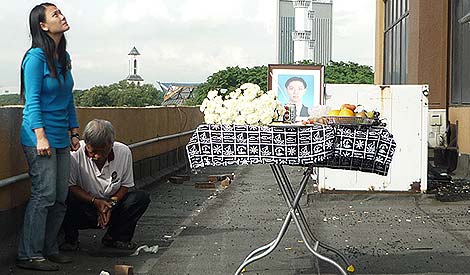 UPDATED:  with the video taken at penang’s memorial.

the family of the late teoh beng hock, with about 50 supporters, including PR politicians, turned up at plaza masalam at shah alam, to commemorate his 1st death anniversary. (plaza masalam is the place where the body of teoh was found).

read about it from malaysiakini CnP below and also watch the video.

the report mentioned teoh’s sister lee lan was overcome with emotions in her speech and broke down several times. watching the video as she spoke and cried, made me cry too. as i hear her talk and cry, i picture the body of teoh lying at plaza masalam. who can ever forget that image? the image of his body lying face down on the side was all over the media and internet after he was found there. all over the places here and there when people were talking about his death, when news of his death was mentioned, when the inquest was going on, and so on – so who could ever forget it. i can’t. what more the family. it’s so sad. that’s why we must all continue to pursue justice for teoh, see that his murderers are brought to book.

i was at the penang’s memorial organised by DAP youth (DAPSY). the video by my fellow CJ (citizen journalist) jimmy will be up soon and i’ll put it up here too (so do come back). for now, it is the video by malaysiakini first (scroll right to the bottom).  the 2nd photo you see here was taken from the candlelight memorial i mentioned just now. for more photos, please go to my facebook album. (UPDATED:  report of the event from susan loone can be found when you scroll down.)

A solemn, sad atmosphere descended on Plaza Masalam in Shah Alam this morning as family members of Teoh Beng Hock, Selangor state exco members, politicians and the public gathered to commemorate the first anniversary of the political aide’s mysterious death.

Earlier, the gathering held a mini rally at the plaza lobby as leaders took turn to address the floor. Most brought flowers with them, and many tried to get to the fifth floor, where the 30-year-old Teoh was found dead after a night of questioning at the Selangor office of the Malaysian Anti Corruption Commission there.However, the building management only allowed Teoh’s family members, Ean Yong, Hasan, Wong and Teo to enter the fifth floor balcony to perform prayers.

Teoh’s younger sister Lee Lan (centre in blue) said the family would try to meet Prime Minister Najib Abdul Razak again if they were not satisfied with the outcome of the inquest.“Najib said the inquest will take two weeks, the most two months, but it has been one year now.“He said we can meet him again if we are not satisfied. We asked him for a letter of guarantee, but he has ignored us. If the inquest gives us an unacceptable result, we will definitely go to see him.”Lee Lan said family members had agreed to the inquest, instead of a royal commission, “because Najib had said that according to the constitution, we must have inquest first”.She said MACC’s chief Abu Kassim Mohamed’s statement yesterday, in which he said the commission felt the family’s pain, was pure hypocrisy.

“He has been MACC chief for six months. His lawyer had several times tried to stop Thai pathologist Dr Porntip Rojanasunand from testifying through video conferencing.“If he wants the truth, he should allow Dr Porntip to testify through video conferencing. He was conflicting himself in his statement yesterday. If he is sincere, he will not repeatedly do things that go against what he has said.”Lee Lan reiterated that the family members “will not be cheated by the MACC chief”.

Renowned Thai pathologist Dr Pornthip Rojanasunand, engaged by the Selangor state government to conduct second post-mortem on Teoh, had earlier refused to testify in the inquest citing “political pressure” from the Malaysian government.

Following this, Teoh’s family applied to the coroner’s inquest to allow her to testify via video conferencing and this was vehemently objected by MACC’s lawyers. This dispute was rendered academic after Pornthip changed her mind after the Thai Justice Ministry requested her to testify following discussions with the Selangor state government. She is scheduled to appear at the inquest on Aug 18. Gobind, who represented the family in the inquest, lambasted Abu Kassim for issuing a statement one year too late.“I want to ask them one question, why wait for one year only say this? Why was the family made to pursue justice through the court and why only now we see the acknowledgment by MACC?” He then led the crowd to chant “Justice for Teoh Beng Hock!” and “Reformasi!” before ending his speech.

Lee Lan: We will not let up

While addressing the crowd, Lee Lan broke into tears and had to stop her speech several times.

She pledge to his deceased brother that they will pursue the truth until it the end and called on public to support their cause.“Your presence today is very important to (our family). You don’t have to do anything, just continue to support us and follow the news until the day the truth prevail, we will come back here again.”She then appealed: “Will you be together with us and seek justice for Beng Hock?” This was met by impassioned replies of: “Yes we will”.Although asked by police to dispersed, the crowd stayed on until 11am before a simple flower offering ceremony was performed at the lobby to mark the end of the event.

(read also from the malaysian insider)

the event in penang:

“But murder, like what happened to Teoh Beng Hock, a DAP member and a good friend, was beyond our imagination, it was too much and something we could not accept,” said the DAP political education director.

“There is yet to be justice for Teoh. There is still a lot of double standards practiced by our leaders and institutions,” added Wong, who is Penang exco member for Town and Country Planning, Housing and Arts.
“So let’s make a pledge: We want to see all the wrongdoers punished”. 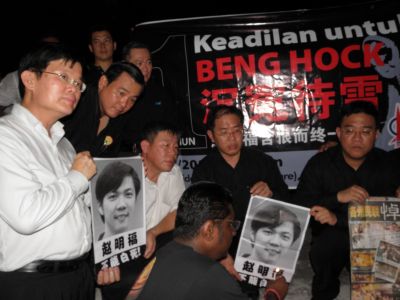 After his speech, Wong asked the crowd to raise their candles and cry for justice to be served for Teoh, who was a DAP political aide when he was alive.

Those words struck a chord in the hearts of about 100 people who turned out at the event which went on peacefully for about an hour.

The air was filled with the warmth of lighted candles and the spirit of people’s solidarity for Teoh and his family.

The participants’ chanted slogans like “Justice for Teoh Beng Hock”, “Stop the cruelty” and “reformasi”.

Teary-eyed participantsMany were teary-eyed as the speeches went on without interruption in the cool night heavy with sympathy.

They was a dearth of PKR and PAS leaders but Komtar state assemblyperson Ng Wei Aik said that invitations were sent to all Pakatan Rakyat leaders.

“Perhaps they had been caught in a traffic jam leading up to this place,” added the PR Youth secretary, referring to an accident along the Jelutong Expressway which saw a body covered with newspaper lying on the road, about 3km away from the Esplanade.

However, the usual crowd who frequented the Speakers Square was present with candles and photos of Teoh, who died last year after severe interrogation by Malaysian Anti-Corruption Commission officers for a corruption charge that was never proven.

A group of special branches officers did their usual grind – busily videotaping the event, snapping photos, jotting down notes and mingling with the crowd.

An officer was spotted carrying a candle, and one, who was familiar to most reporters, even remarked “I wear a yellow T-shirt because it is the symbol of freedom”.
During his speech, Seri Delima (DAP) assemblyperson RSN Rayer (right) accused the MACC of being partisan and not impartial.

“Were they arrested and charged? Why did this happened only to Teoh? Is MACC really open? Until now we do not know why Teoh died and who killed him,” he added.Teoh’s death ‘a lesson for all’

“It is so very cruel and so very violent,” she said in a rousing speech.

“There is no freedom to live in this country. The rakyat should be given freedom not killed just like that,” added the councilor. who is a representative of PAS.

Ramlah said Teoh’s death was a lesson for all and she urged the people not to be tricked by BN despite their various propaganda to win the hearts of the people.

“Teoh is a hero and a symbol of freedom fighters for Malaysia, “she hailed.

Tanjong parliamentarian Chow Kon Yeow (left) said the event was organised not just for Teoh alone but for all Malaysians.
“The country is in a serious situation under the rule of BN. The results of March 8 seems not to have woken them up. Their rule is corrupt, cruel and oppressive,” Chow, who is a state executive councilor, told the crowd.

“When will they be aware? It seems like they will never, never be aware at all,” added the state local government, traffic management and environment committee chairperson.

At about 10pm, the event ended with participants placing their lighted candles along the pavement, where the flames lined the streets, a reminder that the road to freedom and justice is paved with fire and brimstone.  (note from lucia:  the picture above, taken by me, shows some of the DAP members squatting down to light candles)

(and from the malayisan insider)