You are here: Home › CnP › RM811m, no tender, supposedly black listed contractor – only in malaysia!

i have brought this up on facebook but i have to do it on my blog too as it was in my blog that in jan. this year, i had also posted about this same issue.  now since this issue had been brought up again in malaysiakini, i thought i first… point you to my earlier post. do go there and read and see many pictures of the on-going projects, pictures taken personally by me.  secondly to CnP from malaysiakini for the benefit of those who don’t subscribe to malaysiakini (2 articles). this must be a hot issue i guess since i notice there are more than 100 comments.

first some comments. it was reported that in the beginning the estimated cost was RM400m but now it had escalated to RM811m!! more than double! and if you read my earlier post, a blogger had estimated the cost will go up as high as 1 billion!! ya allah!.   the deputy works minister, in explaining why  the increase in the cost from RM400m to RM811m  said it is for ‘additional safety measures’.  really? then you can bet that after the palace is completed, more ‘additional safety’ (and security) measures will arise… and again money spent!

it’s really sad to think that our country can spend so much for just one man. you would have said not any man but a king, so it is justify. but why? why when there is already an existing istana that is big and spacious too.  why when the govt. said it has no funds to sponsor students. why when there are still so many poor people without a homes. with that kind of money spent on a resident for one person, it could be use to build hundreds of low-cost flats for the poor! oh well… since when did our govt. think of the poor.  they think of their own pocket more……… 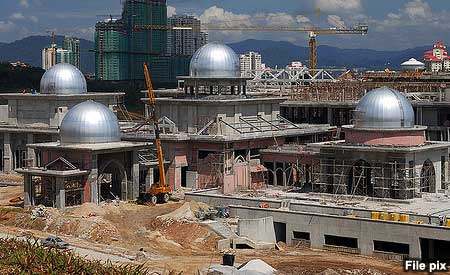 The construction of the new national palace at Jalan Duta, Kuala Lumpur has doubled in a period of four years, the Dewan Rakyat was told today. During the Question session this morning, Deputy Works Minister Yong Khoon Seng said the palace was estimated to cost RM400 million in 2006 but now costs RM811 million.

Contracts for the construction were awarded to three companies through direct negotiations instead of open tenders, said Yong.Yong said that the contracts were awarded in such fashion because the national palace was “unique” and required additional security considerations. His statement prompted a retort from Nga Kor Ming (DAP-Taiping), who had posed the question earlier, that direct negotiations run contrary to Prime Minister Najib Abdul Razak’s pledges under the New Economic Model.

Nga argued that Treasury instructions stipulate that all public procurements of more than RM200,000 must be through open tender, but this was not observed for the new palace.

Make sure it won’t collapse

Earlier, Yong explained that the project was divided into three zones – royal, administrative and supporting buildings – hence the three contracts.

The deputy minister said that the project is now 60 percent complete and is on schedule for completion by May 30 next year. After Yong’s explanation, Nga asked four supplementary questions. Among others, he sought a guarantee that the new palace will not collapse as was in the case of the RM270 million Gong Badak Stadium, Kuala Terengganu.

“How is that the estimated cost has increased by more than 100 percent within five years?” demanded Nga.

The deputy minister explained that the project was “special” because this is the first time the government is building a dedicated palace and that additional safety measures are required.The new palace complex is expected to be completed by next February. 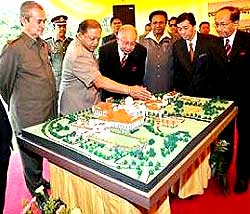 The safety of the monarch is in jeopardy, said Taiping DAP MP Nga Kor Ming, as one of the contractors working on the new palace is the same builder behind the Gong Badak Stadium in Kuala Terengganu which collapsed last year.

The roof structure of the RM300 million Sultan Mizan Zainal Abidin Stadium gave way, just over a year after its completion in 2008, in time to host the 12th Sukma (Sukan Malaysia) organised by Terengganu.Nga said that the company which is in charge of constructing a flyover from Jalan Duta to the palace at a cost of RM130 million, was the main contractor behind the building of the stadium, said Nga.

The Works Ministry had informed Parliament yesterday that RM811 million is being spent to build the palace to replace Istana Negara which is currently the royal home. Deputy Minister Yong Khoon Seng said the cost has doubled from the original estimate of RM400 million in 2006 due to its unique features and additional safety measures. Yong said that the construction of the main complex was awarded to Maya Maju Sdn Bhd at a sum of RM650 million, while a contract for the flyover from Jalan Duta to the palace was given to Ahmad Zaki Bhd. The contract for the upgrading of an access road from Jalan Changkat Semantan to Jalan Istana costing RM32.5 million was awarded to Kejuruteraan Kenari Sdn Bhd.Still not restored“The stadium which cost RM282 million was used for only 10 months, now it has collapsed and it cannot be restored till now,” said Nga.

“I’m here to ask the Works Minister Shaziman Abu Mansor… why is the same contractor behind the collapsed stadium is working on the symbol of national pride and the King’s home.

“Contractors who were involved in such scandalous projects should be blacklisted and not chosen for public projects.”

Nga  said he fears for the Agong’s safety, adding that “one morning His Majesty would be having his breakfast and suddenly the palace (will) collapse… it would be a very unfortunate tragedy for the country”.

He added that the minister has to answer to all the questions relating to this matter, including why the contract was not awarded via an open tender system.

“His deputy (Yong) is not well-versed with this issue. Yesterday when he was pressured by me, he didn’t know how to answer,” said Nga.

6 Responses to "RM811m, no tender, supposedly black listed contractor – only in malaysia!"