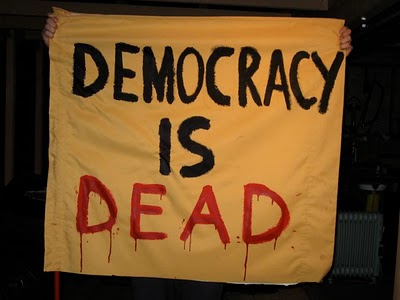 yes of course you can’t, silly…. because all the media TV are federal government onwned and umno controlled.

and the opposition are not allowed to publish a daily ‘mainstream’ paper.

ok so for that to happen, wait till elephants fly i suppose.

do read ‘tv producer resigns over political interference’ from malaysiakini. (click on read more) and see what happened.

this reminds of of not too long ago, a talk show host from 8tv was busted out as being a talk show host (and think delegated to some admin job) when she, if i’m not mistaken, criticised something our PM done or said. 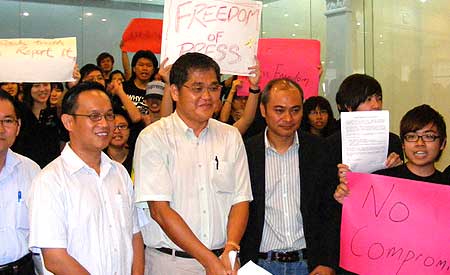 Senior producer at ntv7 Joshua Wong (pic – in black coat) has thrown in the towel following what he claimed were “overzealous self-censorship and government interference”.

Wong, who produces popular hour-long talk show ‘Editor’s Time’, said that the “unreasonable restrictions” has been placed on his show, which frequently discusses the socio-political situation in the country.

“The top management at ntv7 have been unreasonable and unjustifiable. This restriction of freedom amounts to a punishment and it affects the professionalism of the team,” he said at a press conference in Kuala Lumpur and Selangor Chinese Assembly Hall this morning.

Wong  said that the problem started when an SMS complaint was forwarded from the Prime Minister’s Office to his bosses a day after the first episode aired on March 18.

The episode was a forum between leaders from BN and Pakatan Rakyat, as well as two political analysts, on the performances of both coalitions since the 2008 general elections.

The complaint had alleged that the show had insulted the BN government’s policies, and that the political discussions were becoming “dangerous”.

The SMS also included rants with racial undertones, suggesting that Chinese people are “becoming rude” and that “the Malays should go to war”.

Wong, who have been a journalist for 16 years, also alleged that the SMS was forwarded by none other than the Prime Minister’s wife Rosmah Mansor, who received the complaint from someone else.

The top management at ntv7 then demanded a clarification from Wong, as well as programme host Lee Siad Huey.

Ntv7 is one of the four free-to-air television stations owned by Umno-linked Media Prima.

No discussion on Hulu S’gor

Since the complaint, Wong also claimed that his proposals for the show, including bringing in DAP MP Tony Pua have been shot down, with threats to cease production.

“At the end, there was an effective ban on political discussions, as well as featuring opposition leaders as guest speakers,” he said.
Wong also said that he was disappointed that his superiors did not investigate the complaint or even lodge a police report against the SMS which was seditious in nature.

“If we continue to allow such racial remarks, Malaysia will certainly be a hotbed of racism,” he said.

He also said that he hoped that his resignation will set an example to fellow journalists to stand up for their profession and not the accept interference lying down.

The veteran journalist who has been with ntv7 for seven years before calling it quits, was also flanked by Writers Alliance for Media Independence’s Sow Meng Keong, Kuala Lumpur and Selangor Chinese Assembly Hall chief executive officer Tan Ah Chai and columnist Josh Hong at today’s press conference (above).

More than 50 students from New Era College, where Wong occasionally lectures, also showed up in black T-shirts and placards defending him and demanding for “freedom of information”.

Wong, have been a journalist with several Chinese dailies as well as the state-owned news agency RTM, before starting his stint in ntv7.

An investigative journalist, he shook the nation with his expose on a human trafficking ring of Burmese refugees run by Immigration Department officers as well as foreign nationals duped into slavery in a fishing village in Sarawak.

He also won an Anugerah Seri Angkasa in 2005 for his documentary on the urban poor in Kuala Lumpur, which was aired in the Mandarin ‘Edisi Siasat’.

Meanwhile, Tan said in a press statement issued late today that he was “deeply saddened” that ntv7 has lost of an outstanding journalist.

“Pressing for more press freedom and editorial independence are the wishes of all journalists. It is most regrettable when a talent leaves. Yet there are those who chose to stay and continue to fight.”

Tan said that those journalists who left and those who stay are both fighting for the same cause, albeit in different ways, but with the same objective.

The award winning ntv7 journalist explains the reason for his shock resignation as producer for the current affairs talk show ‘Editor’s Time’.

I have on April 20 resigned as producer for ntv7’s talk show ‘Editor’s Time’.

I am dissatisfied on the way the company has handled two complaints which came from the Prime Minister’s Department and the First Lady (Rosmah Mansor). The complaints came after the airing the programme’s Kuala Lumpur roadshow (March 19) and Penang roadshow (April 8).

The company, without conducting due investigation, set unreasonable restrictions for the talk show on the issues to be discussed as well as those to be invited as panel speakers.

1) The show not allowed to discuss political issues;

2) Opposition leaders cannot be invited to the show, including DAP MP Tony Pua who was to take part on the topic relating to the New Economic Model, and

(3) Ban on the ‘Hulu Selangor by-election’ show, which was originally scheduled for April 22.

These restrictions are not justifiable. It has threatened the independence of my job as producer. It is also a form of self-censorship, which is against the principle of fair and independent reporting. These restrictions have seriously affected the professionalism of the producing team.

According to my superior, Tan Boon Kooi (ntv7 Mandarin News and Current Affairs executive editor), the first complaint was made on March 19 after the airing of the roadshow in Kuala Lumpur the day before. The complaint came from the Prime Minister’s Department via SMS. This SMS was forwarded to me by email through Lee Siad Huey, the host of ‘Editor’s Time’.

The SMS came from an anonymous writer, and its contents do not make sense and are full of racial remarks. Without finding out more about it, the company threatened to cease the production and demand for my explanation.

Lee and I had on March 22 written to the company, rebutting each and every accusations, and suggested to the company to make a police report pertaining to the racial remarks stated in the SMS, which was seditious.

However, the company did not take my suggestion seriously. Not only did they not lodge a police report, they have instead ordered that the talk show be prohibited from discussing political issues.

During a meeting on April 2, I suggested Petaling Jaya Utara MP Tony Pua to be a guest speaker to talk about the New Economic Model (NEM) scheduled to be aired on April 15. But my direct superior Tan Boon Kooi told me this, “If you invite Tony Pua, then this production will cease.”

He also told me that from now on, no opposition party member can be invited to the talk show. When I pressed further, Tan told me that this was only an advice, not an order, from the News and Current Affairs ntv7, 8tv, tv9 and radio news and Prima Media group editor Manja Ismail. To me, this is a form of self-censorship from the company’s top management.

On April 16, News and Operation ntv7, 8tv and tv9 general manager Sofwan Mahmood ask for a meeting with me and Tan out of the blue. Tan was busy at that time, and I attended the meeting alone. Sofwan asked about the topic for the next show, I told him it would be the Hulu Selangor by-election.

He then said that it was not advisable as the BN had faced a major blow in its selection of the candidate for the by-election, and the show would embarrass Najib Razak’s administration. He then said he has never interfered in our task as a producer.

I told him that I would prepare a proposal for his consideration before any decision was made. He did not agree, but neither did he object. And his secretary, Dayang Norshida, asked me to write the proposal.

After that, I met with Tan, and briefed him pertaining to my conversation with Sofwan. Tan said, “Sofwan did not say it clearly. He actually wanted us not to talk about the by-election in the coming show.”

rosmah mansorTan added further, “On Monday, the First Lady complained about your Penang roadshow – all the way from Washington… I hope you will change the topic.”

I later found that the First Lady had received complaints from other people, and she re-directed the complaint to the top management. Tan said the content of the complaint is more or less the same as the complaint received after the airing of the roadshow in Kuala Lumpur.

It is inevitable for Malaysians to discuss the Hulu Selangor by-election. Bear in mind that the original goal and aim of this show is to discuss current issues – the by-election is without doubt an issue that relates to public interest.

As long as the analysis is balanced, objective, and not tilted to one side, I believe that the show can, and will, result in an in-depth and meaningful discussion. We do not need to over-react on a totally unreasonable complaint, or impose such high level of self-censorship and stop discussing about the by-election altogether.

On April 19, I wrote a proposal to my superior seeking their approval so that the original scheduled show on April 22 can proceed. Lee and other crew members had gone to the constituency to do research and interviews.

On April 20, at about 2.30pm, Sofwan met me and Tan. At the meeting, Sofwan ordered that the show must not talk about the by-election – the reason given was to “control damage”. As a result, we have to change the topic at the last minute.

I guess what is meant by “control damage” is that we must use this talk show to protect certain parties and their interests, which is totally against the principle of fair reporting and our duty to seek the truth.

As a producer, I think that the two roadshows reflect a balanced and objective view, and they had obtained the approval from the Censorship Board. There is no reason for the company and the top management to impose such high levels of self-censorship and restrictions.

I refused to compromise, and I refuse to execute the company’s order.

I think as a media practitioner, we should express our opinion and our stand without fear or favour. This is to protect the independence and professionalism of journalists. If we continue to keep silence, our silence will allow political interference, unreasonable self-censorship, and worse still, we will allow all sorts of racial remarks from all sorts of people.

Racial politics and news self-censorship had been with us for more than 50 years. How can we continue to keep silence, to tolerate such a situation and allow this to happen again and again?

Editor’s Time is a new TV programme in ntv7 and focuses on discussion of current issues. It is a one hour live show and it was launched April 1 for the 11pm to 12pm time-slot every Thursday.

The topic discussed in the KL roadshow was ‘Key Performance Indicator – who performs better? BN or PR?’.

The show was hosted by Lee Siad Huey, ntv7’s Mandarin news presenter. The speakers for the KL roadshow were:

The topic for Penang roadshow was ‘Key Performance Indicator – Two years after 308, is Penang getting better?” The four speakers were: