You are here: Home › announcement › march 8: time for real change 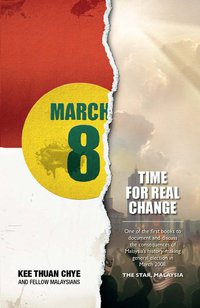 that, my dears, is the title of the new book by kee thuan chye.

some of you might remember his book ‘march 8: the day malaysia woke up’ which came out somewhere in sept. 2008. i have blogged about it when the book came out because my contribution was in the book. to refresh your memory, do read here and here please.

this time more than 2 years later, kee came out with another book, a ‘revised and upgraded version of march 8: the day malaysia woke up’ so said the review in malaysiakini (CnP below for you to read if you are not a subscriber of malaysiakini).  i haven;t read the book so don’t know about the contents and who contribute to it. i do know that facebook friend, vijay kumar did contribute an article. reading the review from malaysiakini.  i notice that the first part of ‘march 8: time for real change’ consists of  articles from ‘march 8: the day malaysia woke up’. there are 3 parts in the new book. since having read the first book, so i guess for the second book, only 2 parts are new to me. nevertheless i will still get hold of the book to read. make sure you do too ok!

AN INSPIRING CHRONICLE OF CHANGE

But when our PM attended a Christmas celebration at the Catholic Church Archbishop residence, the PMO directive ordered the church officials to remove crucifixes and prohibit them from singing hymns and praying, saying it’s to protect the prime minister’s Islamic credentials.

Here we are shouting 1Malaysia this and 1Malaysia that, but know not how to respect the tradition, culture and beliefs of another religion? What message are we sending out to the public and the world at large? That we are still immature even after 53 years of independence?

That even our own leaders can’t walk the talk?

That’s just the tip of the tip of the iceberg. And our opinion would probably sound very biased to those who only read the mainstream media or who have been constantly reminded and instilled with fear of change.

A wise man once said, “He who rejects change is the architect of decay.” So, let this book, ‘March 8: Time for Real Change’, open your mind. Read it and then, tell me and those whom I share my stand with, if we’re biased.

‘March 8: Time for Real Change’, is an upgraded and revised edition of the 2008 original, titled ‘March 8 The Day Malaysia Woke Up’, put together by Kee Thuan Chye.

This edition is divided into 3 sections – Where We Are Now, Back to the Beginning and Where Do We Go from Here, and contains 42 essays altogether.

The ones in Where We Are Now discuss major issues that have happened since March 8, 2008 and reflect on whether the country is better or worse off.

Back to the Beginning consists of essays and interviews selected from the original book, which bring us back to the beginning of March 8, helping us to reflect and learn from our mistakes before moving forward. Lastly, in Where Do We Go from Here, we look forward and reignite hopes for a better future.

Spread sporadically throughout the book are comments and opinions shared by Malaysians from all walks of life, young and old, expressing their hopes for real change – each very moving, especially the ones written by determined, hopeful youths.

The essay that tugged at our hearts was the one written by Kee (right), titled Merdeka on March 8, which reminded us of what happened three years ago – the joy that spread like wild fire and camaraderie that had the right ingredients for the now 1Malaysia.

Everyone did their part to make a difference. There were those who came back from afar just to cast their votes, those who volunteered to help out at the polls and those who attended the numerous ceramahs during the campaign period, to see change. And change is what we got.

If this can’t convince people that we can make a difference, then I don’t know what can.

There are also brilliant interviews in this compilation. We enjoyed the ones with Raja Petra Kamaruddin (RPK) that had a rather suggestive title, How Big Are Your Balls? and Steven Gan in We Stand with the Underdogs.

It goes without saying that the interview with RPK is not without some bluntness, wisecracks and Malaysian slang slipping in every now and then. Not only did it tickle us to the core, but it made us ponder on a few things.

We liked what he said about fear. “Once you keep fearing and fearing, everything takut, gangster-lah, takut ini-lah, takut itu, I tell you we will never move forward.” And how can one learn not to be scared? “…set an example, and you get people to join you.”

And we found the last comment he gave in regard to Umno ruling by sheer intimidation, so true. Don’t blame the musang for eating the ayam, because that is its basic instinct. If you want to blame, blame the one who opened the door to let the musang in, i.e. people who gave the power to the parties to do so.

We Stand with the Underdogs, is an interview with Steven Gan, the editor of Malaysiakini, who’s also a dedicated, rare Malaysian journalist. In this interview, Steven shares with us about his experience and challenges working with an independent media.

The second half of this interview focuses on being an underdog and supporting those in the same position. “I think if BN happened to be out of power, we would be standing with them. It is part and parcel of the fact that there has to be some check and balance, and we need to play that role.”

Like many other Malaysians, he too, shared the sweet success of March 8. He said, “I think the most meaningful thing that came out of it is that there can be a change in government without riot”, further proving that we need not fear change, because we can handle change.

This book reminded us that change is possible; that there is hope for a better Malaysia. It helped us recollect what has happened and reignited that fire in us again, to want to make a difference.

Youths and those interested in knowing a little more about politics besides the ones you have read in the mainstream media would appreciate this book, as it gives a clear picture of what we have achieved thus far and what our future holds if we don’t do something about it today.

Please do not to turn a deaf ear and blind eye to politics; it’s not dirty if you’re fighting for peace and justice.

If you’ve never really cared about the future of Malaysia, then ‘March 8: Time for Real Change’ might just make you want to care about it now.