You are here: Home › CnP › penang to table the race relations act and freedom of information act 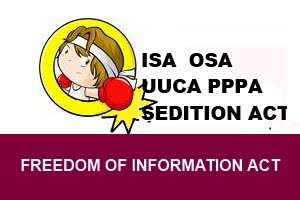 it had been a long time that NGOs had been pressing the penang govt. to table the freedom of information act (FOI), especially after selangor did it.   as for the race relations act, it was spoken of and debated in parliament but it come to nought.  the federal govt. did not want the race relations act! so i’m glad that penang (my hometown and where i’m staying now) is taking the lead to table (and hopefully pass) these two acts.

please click on ‘read more’ to read the reports  from malaysiakini, by a fellow penangiite friend, susan loone.

The Penang government is proposing to table a Race Relations enactment to counter racism and extremism in the state, said Chief Minister Lim Guan Eng today.

Lim said since the proposal was shot down when Bukit Gelugor MP Karpal Singh raised the issue in Parliament, the state was planning to table it at the legislature assembly at next year’s sitting.

“It was shot down in Parliament because it is under the control of BN MPs; in Penang, we are not under anyone’s control; here we are controlled by the people,” he said during his speech at the Deepavali open house in Taman Tun Sardon today.

“(With this Act) we will all stand together and will not allow the racists to disturb us,” he added.

Experts to have a say

Lim, who is DAP national secretary general, said the state will invite experts from all sectors of community to discuss the subject.He added that the matter will also be discussed with the state legal advisor.

Lim was responding to a statement by Pulau Betong (Umno) assemblyperson Muhamad Farid Saad at the recent Umno annual general assembly, where he said that the Penang government was acquiring land owned by Malays.

Muhamad Farid urged the federal government to look into the matter seriously by stopping the state to ‘open’ land which had been previously gazetted for various reasons.

He added that one of the reasons from acquiring a 40ha piece of land belonging to the Malays by the state government in Balik Pulau was for the purpose of building a university from Singapore.

Lim clarified the land was acquired so that Penang could be become a centre of education in the region as it plans to attract universities from Australia, Egypt and the United Kingdom to set up branches there.

He said that Muhamad Farid was talking ‘nonsense’ about the large number of Malays who will be evicted from their lands as only 21 percent of landowners there were Malays, while the rest belonged to other ethnic groups.

“Umno is irresponsible for this statement; we also acquire pig, chicken and cattle farms from there, why doesn’t Umno mention about this?” he asked.

“We need to do this because we want to provide a conducive environment for universities;” he added.

Lim gave assurances that the families whose lands were acquired would be compensated fairly and that when the universities were set up, it would be available for everyone, from all communities.

He condemned Muhamad Farid (right) for raising racial issues, and for throwing a spanner in the works of the state government to make Penang an educational hub in the region.

“Universities would not come here when there are controversies; Umno is destroying our programmes, they are anti-education,” he said.

“Please do not let bad people who are racists spoil our plans for better education,” he added.

Penang may become the second state after Selangor to guarantee Freedom of Information by law, if the state assembly passes the Bill.

Deputy Chief Minister II P Ramasamy (right) tabled the Bill today, which generated an hour’s debate.It was then handed over to a select committee for further study, and may be tabled at the next assembly sitting together with a report on the committee’s recommendations..The bipartisan committee comprises assemblypersons TThanasekaran Autherapady (DAP-Bagan Lallang), Ong Chin Wen (PKR-Batu Kawan), Salleh Man (PAS-Permatang Pasir), Hilmi Yahaya (BN-Teluk Bahang), Jahara Hamid (BN-Teluk Ayer Tawar) and Arif Shah Omar Shah (BN-Seberang Jaya), with Jagdeep Singh Deo as chairperson.Selangor tabled its Bill in August and it has been referred to a select committee for further debate and public input.The Bill in Penang has yet to derive any suggestions from civil society.Freeing up official information is a priority in states led by Pakatan Rakyat, to give effect to its election manifesto.

When tabling the Bill, Ramasamy said the legislation will ensure that every sector of society and individual will have the opportunity to access information related to state administration.The enactment will be applicable to information held by all departments and agencies in Penang only.

It will not be applicable to the items and purposes contained in the Official Secrets Act 1972, he said.“With this enactment, every department and government agency must appoint an information chief who will receive and process the applications for information,” Ramasamy said.“Giving out information will follow levels of secrecy to ensure that the information is not misunderstood or manipulated for certain purposes.”

Ramasamy, who is also DAP’s Prai assemblyperson, assured that obtaining information from the state government would be “non-bureaucratic and speedy”, although a fee will be levied to process the application.