You are here: Home › announcement › attn bus commuters! get your report cards! 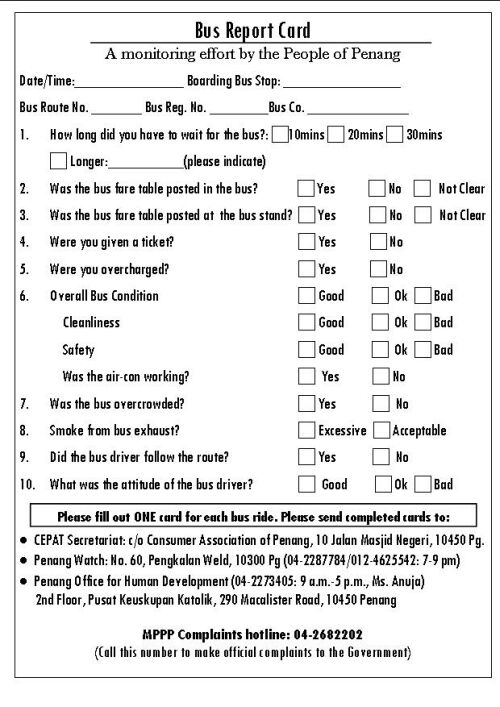 all of you were in school before and know what a report card is right? that is to check on how you are doing in school with the various subjects and overall. well, a group of NGOs who had been monitoring the busÂ  revamp service in penang, has now come out with a report card for bus. this report card is basically for a bus commuter to monitor the bus which they hops on to, to find out like (as the Qs appears in the card), how long you waited for the bus, were you over-charged, was the bus dirty and so on. what a bus commuter need to do is to take a card and fill in the details ofeach bus that they take. yes, one card for one bus.

the card measures 10.5 x 14.5 cm, and is in yellow colour, printed on both side – english on one side and bahasa malaysia on the other side. these cards had been distributed to some bus commuters already. i personally carry about 10 of this cards for my personal use and to give to friends who take the bus. if you want the cards, you can drop in my office (address as above in the card, under ‘penang office for human development’) to collect them.

the data on the report cards that were returned (one had already been returned. see here) will be collated and thus the NGOs will be able to monitor how’s the new bus system doing, direct from the bus commuters themselves. it is hope then that these findings will then be presented to the authorties.

note: more information on the report card and matters concerning theÂ  bus revamp service can be found on the penangwatch site.

2 Responses to "attn bus commuters! get your report cards!"