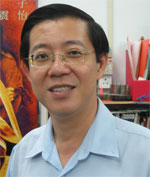 first of all know ye, the police is under the federal government, which means under umno.

ok what got into me to put up such a drastic heading, apart from trying to attract traffic… haha… is because of 2 news i read in sun2surf on tuesday and yesterday. (the other alternative heading could be ‘lim guan eng – first CM in malaysia to be imprisoned’ ok ok not that bad so, ‘lim guan eng – first CM to be called up by police for investigation’. come to think of it the latter will happen for sure.)

tuesday, 1 april, sun2surf –  guan eng prepared to face any action against him on NEP statement.

well, the ‘any action’ could be a jail sentence! so the heading  is not drastic after all eh! in fact this news article really infuriated and incensed me a lot!!

Lim was responding to questions on police’s investigations into his statement on the NEP and Open Tender policy which he gave on the first day he took office as Chief Minister on March 11.

He added that if it is unlawful for him to say NEP breeds corruption, cronyism and systemic inefficiency, then he is not the only one who should be imprisoned. "They will have to arrest the ‘whole Malaysia’," he said.

see? there’s the word ‘imprisoned’ – i am logical after all and ain’t trying to attract traffic. (ahem!).

horrors! perhaps the police would put him behind bars for 5 years! then habislah… poo chik!... his term as CM.

who was this person who lodged the police report? no prize for guessing it was an umnoputera. if not, you think the police will act so fast eh?  apparently this person who lodged the police report had misplaced his otak, according to aisehman.  aisehman asked this OKM lawyer (otak kat mana lah! and can you imagine a lawyer???)  – "what about the demonstration by your fellow mamaks in umno yesterday? wasn’t that seditious, racist, irresponsible and may endanger public peace and national security?" – yeah it was so obvious, obviously seditious and racist and obviously police knew who were the initiators and yet they were not arrested.

On reporters being called in to give their statements on this, Lim voiced his regret that the reporters were dragged into this.

"I am surprised that reporters have been called in to give their statements. I don’t know about it and when I spoke to the Chief Police Officer, he did not mention this to me," he said.

He assured the reporters that if they told the truth and clearly stated that they were just doing their jobs of reporting what the Chief Minister had said, they should not be given any trouble.

oh… was this again a ‘first time’ when police called in reporters as witnesses?

When contacted, George Town OCPD Asst Comm Azam Abd Hamid said it was standard procedure for the police to call in witnesses, in this case, reporters to give their statements over the case.

"A police report has been lodged and we are just investigating the case, that’s all," he said.

oh… i gotta take my hats off to the police the umno controlled police, for being so hard-working. an umno man lodged a police report against a DAP man – quick action but when it is the other way round – no action. way to go! for example, there was a police report against a former melaka MB for his very very seditious remarks (compare to guan eng’s – guan eng’s remark was nothing at all!!) but there was no police action at all. (to jog your memory, see ktemoc’s post no. 3)

"The open tender policy may sideline the one or two contractors who were always awarded the mega projects here but other than that, it will not sideline anyone else," he said.

gosh! what was the PM trying to say? that, there shouldn’t be open tender? oh no! was he in a way inciting the malays/umnoputera to protest against guan eng’s call for open tender? (just like when he, in a way, incite the umnoputera to go on protest on 14 march, when he warned guan eng not to play on racial sentiments.)  actually already this had happened. 27 march report from the star said that the malay chamber of commerce wants fair deal in penang. the chamber president said some sort of handicap should be given to malay entrepreneurs.

huh? apa dia handicap?? doesn’t handicap here means special privilege? and doesn’t that means back to perpetuating NEP policy of giving special privilege to the malays? back to square one!! so in other words, they too do not subsribe to guan eng’s suggestion of open tender? oh, they do maybe but they feel they are still babies who can’t compete with the others so need the handicap. *SIGH*

ok earlier i mentioned my loud heading because of the 2 news article in sun2surf. one i already mentioned with excerpt (1 april) to comment above, and now the other one dated yesterday……..

Even Lim Guan Eng will be called in if needed in the probe on a police report lodged against the Chief Minister for allegedly making seditious statements on the New Economic Policy (NEP), says Acting Penang CPO Datuk Salleh Mat Rasid.

He said this in response to the two reporters who were brought in for questioning in the investigation on the police report lodged by Umno.

"Whoever, either suspects or witnesses will be called for questioning as part of the procedure, including the CM," Salleh told reporters after officiating at a blood donation programme in the Northern Region Marine Police Headquarters today.

yo salleh! the ex deputy CM, was one of those who lead the protest on 14 march, but why you no call him for questioning? oh silly me… because he is an umnoputera lah. *slap myself*

When asked to repond to the CPO’s statement, Lim said: "Everyone is equal in law and we will comply with the law. This is also a first time that a CM has to go through a legal process which is not heard of in the past.

"In the past, when reports are made against any top leader, the case wasn’t pursued but now, it seems there is a new standard.

"If this is a new standard, will they accord the same treatment to other ministers if police reports are lodged against them elsewhere? I just hope the investigations will be fair."

one of the issues that voters were very concerned with and which made them vote against BN in anger was the double standards practised by BN, and it looks like they (BN/UMNO)  never learn. i hope regarding the land scam in penang, the penang state government will find out proof that some ministers or ex ministers or some penang opposition assemblymen were involved, then lodge a police report – and we shall sit back and watch if penang’s CPO will say "whoever, either suspects or witnesses will be called for questioning as part of the procedure"

Lim said the CPO is just acting according to his duties as the police is under the federal government and they are just following orders.

Voicing his concern that journalists were being called in to give their statements over the case, Lim said it was a straight forward case and was puzzled that the two reporters called in on Tuesday afternoon were interrogated for three hours.

my oh my! are they now trying to intimidate journalists? why didn’t the centre for independence journalism or the writers allliance for media independence say something? oops. wrong representation. these 2 groups are into independence of journalist/reporting. then what about the national union of journalist malaysia? oh dear, but the president is from utusan malaysia. no can do.

speaking of journalists, this sun2surf article which i pointed out, if you notice, were written by bernard cheah, carmel dominic, opalyn mok and regina william. what do you know… i know all the 3 ladies. carmel and regina are from the same church (catholic) as me while opalyn is a christian of some other denomination (met her long long time ago before she became a reporter and remember she said she was from jehovah witness at that time.)

ok, this same sun2surf article also talked  about  rapid penang’s situation right now in not stopping at komtar. that my dear, is another issue i feel strongly at since i am a bus commuter, so some day i’ll come back to nag on this issue. 🙂