You are here: Home › general › video/photos/links of the penang UMNO protest 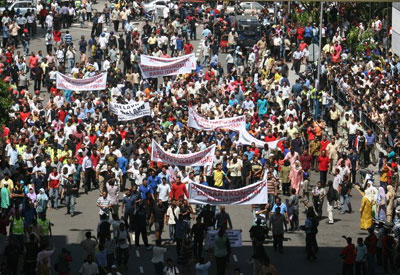 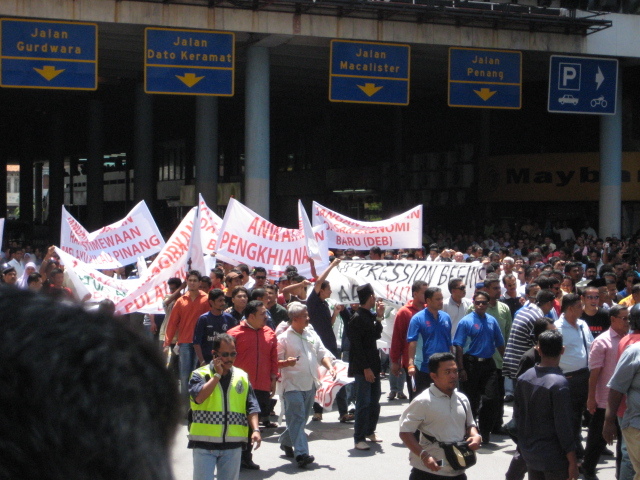 photos taken from chinese cari.com.  hop over there for more photos… or to susan loone’s blog (link below).

btw, i found the last photo er… kind of funny. i would die of embarasment if some chinese will to demo and hold a banner saying "tak akan cina hilang di p. pinang". so demeaning to me!

ok here are the links of bloggers who blog on the protest. phew! i spent more than an hour looking for the links. i’ll update the links as i found out more, including media links, esp. foreign press, which will usually appear later. if you know of any links, do inform me.

blogs:
susan loone – photos and story on UMNO rally in penang
susan loone – video on UMNO rally in penang
penang watch – why can’t they speak thru’ TV, radio, press they control?
penang watch – UMNO demo – last stand by politicians who stand to lose from end of NEP?
whatalulu – lulu wonder if lee chong meng would fly to penang and fend  the shopowners there.
anil netto – 1000 join pro NEP protest in penang
pleash lah – NEP – it’s time to stop being racist!
my so called life – what an eventful day in penang
my asylum – komtar in chaos?
life is beautiful – pak lah, what say you?
lilian (5xmom) – so there was a protest in penang?
4896 – this is not our culture – they said it before
cakap tak serupa bikin (maverick) – melindraf: UMNO, the new hindraf
cakap tak serupa bikin (maverick) – melindraf: UMNO, the new hindraf II
mahaguru58 – anti guan eng protest by penang malays and indian muslim
lil something – penang komtar in kiosk
plazzy’s crib – latest! riot at penang, komtar
aisehman – wacky weak
mageP’s lab – penang: the day after tomorrow

15 Responses to "video/photos/links of the penang UMNO protest"