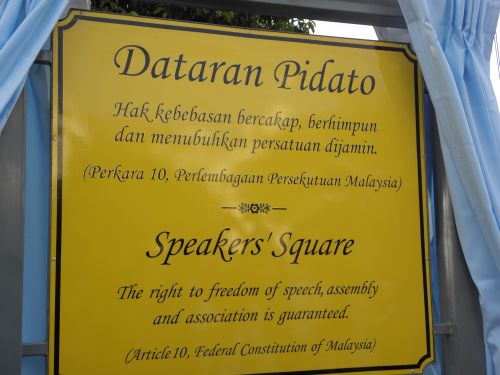 the speakers’ square at the esplanade in penang was finally launched by the chief minister of penang yesterday morning at 8.30am. i was there to take photos and notes. among many of the journalists, met susan loone. wow! she was quick. her story was up at malaysiakini at about noon.  (non subscriber can read from it here after my post).

there were about 100 people present – about half of them from the press, i think. and most of the crowd of course were from NGO.  i arrived at the same time the CM arrived! didn’t even know it was him – yes, he never has siren ringing loudly when he arrived, unlike many umno VIP. i was walking along the pavement and suddenly sense a car behind me so i quickly moved to the side then realise it was the CM’s car!

YB chow kon yeow, was the first to give a short speech and followed by…. surprise!… my long time church friend, andre loh. andre representing the speakers’ square founding committee.  (see his speech below).

last to speak was of course YB lim guan eng.  you can read about what he said in susan loone’s (or other mainstream/online paper).  i do have his press statement copy but not going to mention what he said here. i want to mention his departing shot (which was not in the press statement), which i thought was nice – “bebaskan media, selamatkan rakyat” which means “free the media, save the people”.

when he unveiled the speakers square board, at one time, he pointed to the board and said “article 10, federal constitution. the penang government upholds article 10.”

video by my fellow CJ, jimmy on the launch.

(please remember to click on’ read more’ to read susan loone’s piece from malaysiakini and andre loh’s speech. all photos here were taken by yours truly here)

Penang took a step forward for freedom of expression by officially launching its first Speakers’ Square at the Esplanade today.

Chief Minister Lim Guan Eng said that citizens must use the avenue provided by the state in a responsible manner to demonstrate their views. In other words laws like the Sedition Act and on slander still apply.

They should be mindful that the police have said they are unable to provide any legal immunity from prosecution. However I wish to ask the police to exercise discretion and allow views to be freely expressed.” 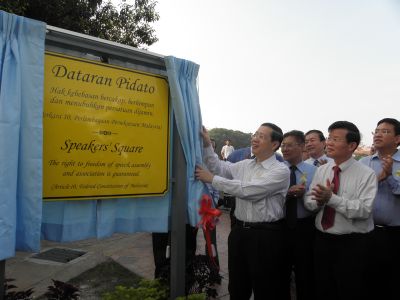 About 100 people, including civil society representatives, turned up at the Esplanade to witness the historic launch of the square by the state in conjunction with Press Freedom month in May.

However, freedom to speak comes only twice a week at this space, which is available from 6pm to 10pm on Wednesdays and Sundays.

Speakers are not allowed to use megaphones and should not be surprised if the police act against them if they do so.

Lim said that the space should be used for gatherings, candlelight vigils, peaceful demonstrations, press conferences and other forms of expression.

He added that he is prepared to face the consequences of making available such a space for freedom of expression.

“The speakers’ corner may result in unfair criticism, including of the state government. However I believe we are all mature enough to listen to different views and allow people the freedom to express them freely,” he added.

“This would ensure that their voices do not disturb the neighborhood,” added Anwar, an award winning social activist based in Penang.

He added that part of speech training was to allow one’s voice to grow without being aided by artificial voice appliances.

He also urged the Toastmasters Club to use the space freely for public speaking.

On behalf of the Speakers’ Square Founding Committee, I wish to thank the Penang State Government and its various departments including MPPP for making today a moment in History.  Speakers’ Square is for all Malaysians. 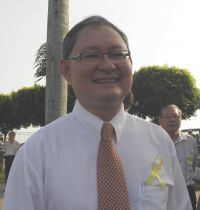 We hope to bring about a newness to Democracy by being inclusive.  The Rakyat and NGOs working hand in hand with Government and law enforcement to develop a richness in our Country not experienced by the younger generation.

The Speakers’ Square is for :-

4.   Various other forms of Peaceful & Artistic forms of expression

We wish to preach the language of Love, Peace, Hope and Desire. Today, it is becoming commonplace for developing and developed nations to graduate towards community policing where the people and law enforcement work together to ensure peace and harmony.  Under the principles of public responsibility and accountability.

Let us together exercise our right enshrined under the Constitution of this GREAT NATION which Guarantees the Freedom of Speech, the right to assemble peacefully & the right to form associations, to realise our dreams of advancing our people in the spirit of true democracy and freedom.